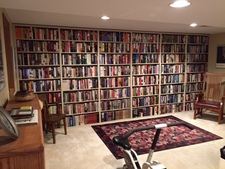 This will prevent Larry from sending you messages, friend request or from viewing your profile. They will not be notified. Comments on discussion boards from them will be hidden by default.
Sign in to Goodreads to learn more about Larry.

“You do not have to be good.
You do not have to walk on your knees
for a hundred miles through the desert, repenting.
You only have to let the soft animal of your body
love what it loves.
Tell me about despair, yours, and I will tell you mine.
Meanwhile the world goes on.
Meanwhile the sun and the clear pebbles of the rain
are moving across the landscapes,
over the prairies and the deep trees,
the mountains and the rivers.
Meanwhile the wild geese, high in the clean blue air,
are heading home again.
Whoever you are, no matter how lonely,
the world offers itself to your imagination,
calls to you like the wild geese, harsh and exciting –
over and over announcing your place
in the family of things.”
― Mary Oliver
tags: beauty, birds, nature, poetry, shore, woods
4153 likes

“The old folk from Indiana and Iowa and Illinois, from Boston and Kansas City and Des Moines, they sold their homes and their stores, and they came here by train and by automobile to the land of sunshine, to die in the sun, with just enough money to live until the sun killed them, tore themselves out by the roots in their last days, deserted the smug prosperity of Kansas City and Chicago and Peoria to find a place in the sun. And when they got here they found that other and greater thieves had already taken possession, that even the sun belonged to the others; Smith and Jones and Parker, druggist, banker, baker, dust of Chicago and Cincinnati and Cleveland on their shoes, doomed to die in the sun, a few dollars in the bank, enough to subscribe to the Los Angeles Times, enough to keep alive the illusion that this was paradise, that their little papier-mâché homes were castles.”
― John Fante, Ask the Dust
tags: los-angeles
21 likes

“My hour for tea is half-past five, and my buttered toast waits for nobody.”
― Wilkie Collins, The Woman in White
tags: afternoon, schedule, tea, toast
815 likes

“‎Life is a shipwreck, but we must not forget to sing in the lifeboats.”
― Voltaire
tags: inspirational
3726 likes

Ariana Franklin
author of: Mistress of the Art of Death

Robert Crais
author of: The Watchman

Gavin Black
author of: The Eyes Around Me
More…

Polls voted on by Larry