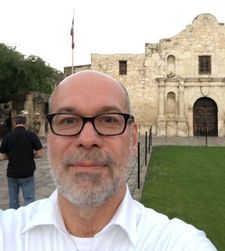 This will prevent Edwin from sending you messages, friend request or from viewing your profile. They will not be notified. Comments on discussion boards from them will be hidden by default.
Sign in to Goodreads to learn more about Edwin.

Edwin is currently reading
Zen and the Art of Disc Golf
by Patrick McCormick
bookshelves: currently-reading

See all 4 books that Edwin is reading…

“California during the 1940s had Hollywood and the bright lights of Los Angeles, but on the other coast was Florida, land of sunshine and glamour, Miami and Miami Beach. If you weren't already near California's Pacific Coast you headed for Florida during the winter. One of the things which made Miami such a mix of glitter and sunshine was the plethora of movie stars who flocked there to play, rubbing shoulders with tycoons and gangsters. Sometimes it was hard to tell the difference between the latter two.

Miami and everything that surrounded it hadn't happened by accident. Carl Fisher had set out to make Miami Beach a playground destination during the 1930s and had succeeded far beyond his dreams. The promenade behind the Roney Plaza Hotel was a block-long lovers' lane of palm trees and promise that began rather than ended in the blue waters of the Atlantic.

Florida was more than simply Miami and Miami Beach, however. When George Merrick opened the Biltmore Hotel in Coral Gables papers across the country couldn't wait to gush about the growing aura of Florida. They tore down Collins Bridge in the Gables and replaced it with the beautiful Venetian Causeway. You could plop down a fiver if you had one and take your best girl — or the girl you wanted to score with — for a gondola ride there before the depression, or so I'd been told.

You see, I'd never actually been to Florida before the war, much less Miami. I was a newspaper reporter from Chicago before the war and had never even seen the ocean until I was flying over the Pacific for the Air Corp. There wasn't much time for admiring the waves when Japanese Zeroes were trying to shoot you out of the sky and bury you at the bottom of that deep blue sea.

It was because of my friend Pete that I knew so much about Miami. Florida was his home, so when we both got leave in '42 I followed him to the warm waters of Miami to see what all the fuss was about. It would be easy to say that I skipped Chicago for Miami after the war ended because Pete and I were such good pals and I'd had such a great time there on leave. But in truth I decided to stay on in Miami because of Veronica Lake.

I'd better explain that. Veronica Lake never knew she was the reason I came back with Pete to Miami after the war. But she had been there in '42 while Pete and I were enjoying the sand, sun, and the sweet kisses of more than a few love-starved girls desperate to remember what it felt like to have a man's arm around them — not to mention a few other sensations. Lake had been there promoting war bonds on Florida's first radio station, WQAM. It was a big outdoor event and Pete and I were among those listening with relish to Lake's sultry voice as she urged everyone to pitch-in for our boys overseas.

We were in those dark early days of the war at the time, and the outcome was very much in question. Lake's appearance at the event was a morale booster for civilians and servicemen alike. She was standing behind a microphone that sat on a table draped in the American flag. I'd never seen a Hollywood star up-close and though I liked the movies as much as any other guy, I had always attributed most of what I saw on-screen to smoke and mirrors. I doubted I'd be impressed seeing a star off-screen. A girl was a girl, after all, and there were loads of real dolls in Miami, as I'd already discovered. Boy, was I wrong." - Where Flamingos Fly”
― Bobby Underwood, Where Flamingos Fly

“I frowned, staring into the eerie blackness along Route 33 truckers always complained about. It is odd how we rarely encounter true darkness. Somewhere, there is always light; a house, a town, headlights. Not here. Just total and complete darkness. I had been on the night run for months, long enough to get accustomed to total darkness if not entirely comfortable with it. What concerned me was the silence. I'd often had to pull over and take a pee along that godforsaken beltway. There were crickets rubbing their legs together in the cotton and wheat, grasshoppers jumping through the corn stalks, and June bugs flittering above the fields. Occasionally while relieving myself I'd even hear a lone armadillo burrowing. Tonight, however, I heard nothing. Less than nothing. Always there existed a strangeness here the truckers talked about, but tonight something had inexplicably hushed the sounds of night and made it stranger. The silence itself was dead; the kind of silence you get high up in the mountains when it snows, hushing the entire world beneath a white blanket. The blanket along Damnation Road was black, and it felt…unnatural." - NIGHT RUN - Bobby Underwood”
― Bobby Underwood, Night Run
6 likes

“When You Are Old"


WHEN you are old and grey and full of sleep,
And nodding by the fire, take down this book,
And slowly read, and dream of the soft look
Your eyes had once, and of their shadows deep;

How many loved your moments of glad grace,
And loved your beauty with love false or true,
But one man loved the pilgrim soul in you,
And loved the sorrows of your changing face;

And bending down beside the glowing bars,
Murmur, a little sadly, how Love fled
And paced upon the mountains overhead
And hid his face amid a crowd of stars.”
― W.B. Yeats

“In Detroit, it was an average night to go and hear the Stooges, Parliament-Funkadelic and the MC5 on the same show. We were all into the 'Free Jazz' movement, the musics of Ornette Coleman and Sun Ra; and experimenting with guitar sounds, and trying different beats, and pushing the rhythm farther...”
― Wayne Kramer
1 likes

“He was dead, all right. He had been shot, poisoned, stabbed, and strangled.

Either somebody had really had it in for him or four people had killed him. Or else it was the cleverest suicide I'd ever heard of.”
― Richard S. Prather, Take a Murder, Darling
tags: death
35 likes

American Westerns — 419 members — last activity Jan 19, 2020 06:57AM
The American Westerns group provides a forum for the appreciation and discussion of classic and current fiction of the Old West.

Polls voted on by Edwin