New show is up: http://www.youtube.com/watch?v=RTaPWY...

I'm going to 'tigana' this thread and start it early. :) (I don't know how you put the '*' on the left.) Good show. I just wanted to point out that Elizabeth Moon was 'only kidding' with her 'chip in every body' comment:

I liked all the user contributions. You guys should show Chris's Hyperion drawings towards the bottom: http://www.goodreads.com/topic/show/8...

I would also like to point out that Blue Remembered Earth is out in America finally!

Nimrod has already finished Tigana and volunteered to be discussion leader: http://www.goodreads.com/topic/show/9...

The Postman is a book by the way by David Brin. I hear it's better? 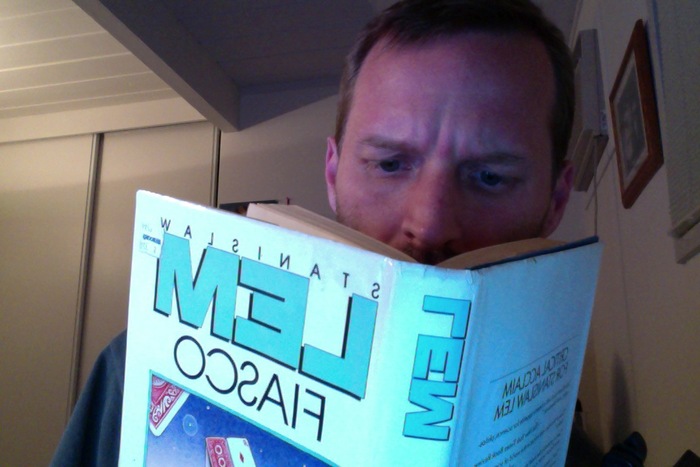 Thanks Tamahome. And Awesome show Tom & V - And George RR Martin on the next show? Are you kidding me! Where's a time machine when you need one.

What other books were started via roleplaying games? I know that's where Raymond Feist's Riftwar Saga got its start.

Kim wrote: "What other books were started via roleplaying games? I know that's where Raymond Feist's Riftwar Saga got its start."

Malazan started as a roleplaying project. The project got abandoned but Steven Erikson kept all the world building stuff for the books. Some of the scenes in the books were based on actual gameplay.

Great ep, in spite of internet slowness (something they DON'T tell you before you go to Japan). You guys seem to really like Tigana. I really must get on with it!

Oh, one thing, I wondered if the original suggester of just Lem should also get some credit too(I think it was Joseph?) especially since you plan on using the shorter name more frequently. Well now, there's no reason you have to play it fair - your show, your rules, etc. :) - and the extended name is brilliant, but when I listened to that part of the show, I couldn't help feeling bad for the guy who first started the 'dragon Lem' trend, so it seemed unjust that he didn't get a mention.

...wait, actually, didn't the full name first get mentioned by Sporadic Reviews? Unless his real name is Zack?

Hmmm, but anyway, I love the name. :D

I think it might have been richard with the original

Mod
So many people suggested Lem, including Veronica, that I have no idea who was first. We were wondering if that was his name before y'all even knew we had a dragon.

All thT said if we can show that someone in the forums started the meme in here, we'll take care of them.

Er... That sounded like a threat. We mean we'll give them free stuff.

Enjoyed the episode...Ty and Daniel were a great interview seem very funny and engaging people....The Postman by David Brin is a much better book than movie...The best dragon name possible...i am honored my alt history was used (bowing)...G.R.R.M. should be interesting on the next show...

I'm the Zach B from NY mentioned on the show

Andy at post 12 - I second Lem - any book you abandon can be fed to the dragon!

Hai at post 55 - Lem is short and boring though.

Hows about a tweaked version of ButtonUpZipper's suggestion

A splash of ye old english, and a punch in the nose of tech-ish gibberish.

Me at post 82 - Nathan wrote: "I can't believe no one has pointed this out (as far as I can tell) but when you combine sword and laser you actually get Lord Swaser. This is the name I vote for."

that is a really good name.. Now I'm torn. Lord Swaser sounds like the name of a human though. I still vote for Lem.

Krystal at post 115 - I agree that Lem seems highly appropriate.

Me at post 118 - I REALLY think it should be called Lem but I'm partial to Paarthurnax (the Old One in Dragon language)Elder Scrolls ftw.

Sporadic Reviews at post 132 - I thought "Bookwyrm" was clever, but I'm sensing "Lem" as the popular vote.

I actually LOLed. I change my vote to this. It still contains Lem so as not to compromise ;)

Sporadic reviews was first mention of the full name, he deserves free things as well. I was just enthusiastic enough to to actually submit it :D

Heck, if you want to get technical on this, I suggested the dragon was a "lem" dragon back when the picture was posted.

Its all good. Zach came up with the full name. So lets move on. Now what I really want to see is the dragon eat a dead tree edition book!!!! The hard part would be picking a book that everyone sufficiently dislikes. Twilight maybe?

Also, I get credit for getting a WTF look from Ty Franck and Danial Abraham with my Team "Ceres" question!!!!!!!

Is it me or does Ty Franck look like Billy Mitchell?

I don't really see the point of the pseudonym 'James S. A. Corey'. Almost everyone is the same breath says 'Ty Franck and Daniel Abraham'. Dan Simmons doesn't have trouble changing genres.

I eagerly sent the link to my wife at work, and at first she texted back that she was amused and proud of my creativity, but almost immediately sent me a followup chastising me because I had "made the redhead sad."
I officially apologize to Veronica. I like Tigana. We cool?

I find that argument compelling. lol. No but really, I understand the branding issue he brings up. If someone hates 1 book by blah blah theres a very good chance they may not pick up another one solely based on the name of the cover, assuming they dont know of the other aliases the author goes by. However this same idea could also work against them.

I love this show!

Nick wrote: "Is it me or does Ty Franck look like Billy Mitchell? 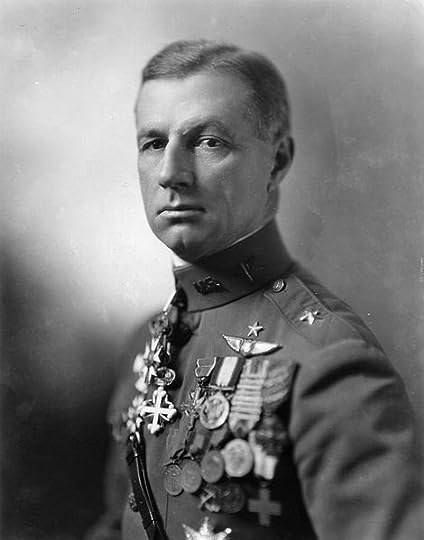 Don't see the resemblance myself. How does he feel about strategic bombing?

Sean wrote: "Don't see the resemblance myself. How does he feel about strategic bombing?"

Thank you for pointing out my pathetic knowledge of history before the 80's!!

Come on, he Gary Cooper played him in the movie of his life.

I laugh out loud when i heard the Dragons was gonna be named Lem, because where i'm from Lem means the male genital or a hatch and some other things but mostly used to describe the penis.

Zach wrote: "I'm the Zach B from NY mentioned on the show
[proceeds to copy paste relevant parts of dragon name thread]"

Now, why did I not think to do that when I was likewise going through the the thread! >.<
And just to be clear, I in no way begrudge you your prises and mention on the show - well done. :D

Nick wrote: "Heck, if you want to get technical on this, I suggested the dragon was a "lem" dragon back when the picture was posted.

Its all good. Zach came up with the full name. So lets move on."

It's all good. I just felt an itch that an injustice had been done, and wanted to make sure everyone who had a claim to it got a bit of credit, even if just via this thread.

So to Nick, Joseph, Sporadic Reviews, Zach, and Veronica for mentioning it way back before anyone had even heard of the dragon (how very hipster ;P) a jolly well done to you all! :D

So I just watched (well, mostly listened, but looked at the screen every now and then) the show.

I guess I'll give Tigana a go. I wasn't going to but since I just finished Throne of the Crescent Moon and I have an Audible credit, I'll start it up. I suppose the worst that happens is I Lem it. ;) On the topic of Tigana, I thought Nimrod was the discussion leader? I seem to remember seeing something in the threads about that, though whether or not that was official...

I usually hate having the book announced so early, but I'm looking forward to the July announcement. I'm going to be doing some travel at the end of this month and into July, so I'll need something to keep me entertained.. ;)

I think Sci fi is on the decline movie and TV-wise and that makes me sad.

Great show. I'm so happy I've been introduced to S&L. I'm one of the noobs who started with the video show. I was happy right away because I'd already read Magicians and Hyperion. Wasn't sure about Tigana but they had it at my B&N and I had a gift card so...

And I'm loving it!

Subscribed to the audio podcast as well and will be looking forward to seeing some other S&L folks at DragonCon.

Excellent show.
I finished Tigana and loved it!!
Kudos for getting an interview with G.R.R.M for next episode, can't wait.
speaking of G.R.R.M I like to hear Tom & Veronica's review ans reaction to Season 2 of A Game of Thrones.

Kevin Grønberg wrote: "but mostly used to describe the penis."

I get the feeling that naming anything anything these days will result in at least one entire country and/or region of people equating your product with a penis.

Also, Tamahome - I read Brin's Postman, a novel that was based on a couple of novellas. Great first half, which I reckon was the part based on the novellas. I think maybe it should have stopped there, but the movie definitely did not do it justice.

Also, glad to see "bookwyrm" made it in there. That was a brilliant suggestion.

Kim wrote: "What other books were started via roleplaying games? I know that's where Raymond Feist's Riftwar Saga got its start."

Didn't Martin's Wild Cards series start off as someone's RPG? I have a vague memory of someone discussing the origin of the were-subway car character.

Also, Paksenarrion (from E Moon of chip fame) always seemed like a D&D extrapolation through someone who knew logistics.

Wizards of the Coast publishes books for every set of Magic the Gathering.

Often many of the cards are named after characters in the books, and as I continue to surmise, share powers similar to their behaviors in the game.

The idea behind Magic the Gathering is to capture wizards casting spells, against each other, not egos beating each other up. But, because egos love beating each other up, Hasbro purchased Wizards of the Coast about 10 years ago, and decided, the game needed to get nicer, so it could be enjoyed by people of any age.

It is starting to work into being more of a bored game. The Deck Builders Pack gives 301 cards, including lands :)so kids or adults can play each other at home. If your child is good at math they may find it especially enjoying the game. They may even be so good that they could win Pro Tournaments and pay for college.

Ok I'm sooo late to this thread, but I've just finished "Leviathan Wakes" and watched the interview with James S.A. Corey.
I've looked through the posts and I'm astonished:
Doesn't anybody else want to play that RPG?