29 views
You know what I hate more than comment deleters and people who post and then leave combined?

People who have a fucking challenge question on their profile that has to be answered correctly before you can even REQUEST to be their friend!! That's fucking brilliant!!! Why didn't I think to do that?

D, friend me right this very minute so I can snoop around your profile OR ELSE!

You know what else I hate? People with private profiles that don't say their gender and their name doesn't give you any hints either.

You know a few weeks ago when you were going to kill someone at work and we were talking about how we were going to get outed by a police investigation? I think D is it... D is going to flip the fuck out and the police are going to analyze their hard drive and we're all going to be contacted and put in police reports and on government watch lists.

Gretchen wrote: "People who have a fucking challenge question on their profile that has to be answered correctly before you can even REQUEST to be their friend!! That's fucking brilliant!!! Why didn't I think to do..."

I did that a while back....only had 2 friend requests since, though. Ignored one (didn't even try to answer) and accepted the other (wrong answer, but still close enough for government work).

I just tried to friend you, Tom, and it isn't the same. I put in an answer and the request went through. D's profile won't let you friend request her/him unless you get the answer right! It goes, "sorry, that wasn't the right answer." She/he never even has to see the friend request unless someone knows the answer! Genius!

I set up my challenge question so the answer makes no sense/has nothing to do with the question. Aaaaaaahhhhhh. No more effing authors friend requesting me.

Also Gretchen, I saw D's avatar before he/she changed it to a toucan. If it helps, the individual in the picture resembled Doctor Who. Seventies Doctor Who, to be precise.

I saw that avatar, too. I thought it was Bob Dylan.

Gretchen wrote: "(psst. what should i do if D won't friend me?)"

Harass him/her until he/she deletes his/her profile out of fear/frustration and curls up in the fetal position, sucking his/her thumb.

How do you know??

Montambo wrote: "Who the hell is D?!"

That's exactly what I'd like to know, Sarah! You're not behind at all. But since I love it when you do this for me, here you go:

D joined over the weekend and started a thread called "I hate my big nose" and then quickly changed the title to "Blah" and deleted her/his first post. That sucked because Alfonso found the perfect book for us to read about big noses. D also started a bunch of other threads about hair and squirrels and announced that he/she had been bitten by a shark. Alfonso apparently knows his/her gender but I don't know how he knows. I can't friend D and snoop around his/her profile because he/she has a question that you have to answer correctly in order to friend request him/her. I demanded D friend me so I could figure out his/her gender but he/she is conveniently ignoring that particular thread while posting in all the others. Then D. changed his/her name to rose and left the group so maybe he's a she. But either way, he/she is a giant pussy.

Oh so you're just relying on your expert gender deduction skills, then. Because you've never accidentally flirted with a dude online.

"I hate when it's really hot and you put your hair up and then later on in the day you let it down and hurts like hell. The hair? or the head? I hate it either way.

Because dudes TOTALLY say "put your hair up."

well... that actually does happen to me... what dudes can't have long hair?

sure dudes can have long hair. I've just never heard one say it like: "put your hair up." I know guys wear their hair in a pony tail when it's long sometimes, but "put your hair up" sounds girly. That doesn't mean he/she IS a girl, I'm just saying it's inconclusive.

this call for a poll!

Nobody ever votes on polls anymore. It's sad.

well they better vote! or D. will molest them!

Somebody should start a poll on wheather D is a man or women and whether he/she was born that way.

one step ahead of you...

Hey Brian. Anyone can make polls. You should make as many of them as you like.

LOL yea i just checked my mail and seen the poll... well let me go answer it now

Now I might have to change the title of this thread, Temporary, because I don't hate you. (yet) 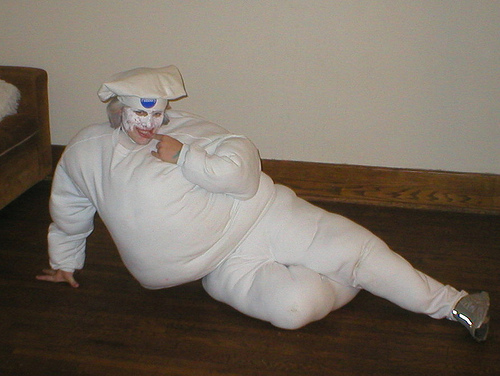 There we go. Kind of a stalker, are you?

Really, I just pop in on one person in particular to make sure they are doing ok, without having to bother them. Happened to see this thread and thought I would spread the love.

Well, I appreciate it! Thanks a lot.

Honestly they probably should. I just recently made my profile private because I found out you could click that little "recent posts" next to groups and see a list of the person's comments in chronological order from all groups and reviews, ect. I know you can easily do it from the group but that's just for their comments in the group. Something about that list of my comments taken out of context like that rubbed me the wrong way and I had an attack of paranoia. My new method is to just post everywhere and often so that way someone has to really want to put in the time to read through a ton of posts to get to anything incriminating.

deleted user wrote: "Anywho, I don't want to be contacted, etc. So, I'm gonna delete my profile now (but I will leave my comments for reference, of course).

who the hell us this fairy godmother/stalker temporary user/deleted member who just reads certain threads to check on one particular person???

Sarah? Do you know?

Oh well. The annoyance of not knowing is sort of balanced out by the satisfaction of having my gender question answered.

Stalker acceptance... Are there no boundaries anymore? Sure you accept a certain level of exposure when you ride the net, but still I don't think anyone should be so carefree about electronic privacy. Not to be a party pooper but I'm going to cut paste that to GR so they can fix it. I'll leave off the identifying markers but still, deleted member, all joking aside respect for individuals explicit wish for privacy would be nice.

can one see the secret groups post using that bug???

No. You can't see their posts in secret or private groups. It gives you the exact same thing as if you click the "recent posts" next to Alfonso's Groups. It's just that you can't click that little button if someone's profile is set to private so that url thing gets around that. You still can't see their profile or their pictures or their friends. Just the posts they made in public forums.

deleted user wrote: "Meh, half assed. I just know this stuff because of my line of work.

Really, I just pop in on one person in particular to make sure they are doing ok, without having to bother them. Happened to se..."

Who do you want to stalk, Denell? We'll help you.