Don't forget Clash of the Titans. And yes, I'm looking forward to that.

3D is the only way to draw some people's lazy behinds out to theaters. That includes me. With DVDs you don't have to sit through endless comercials, you can pause whenever you want to pee, and you're not temped to buy snacks you were not supposed to eat in the first place. But DVDs don't really do 3D, so.

I would just like to see one movie in 3D that was designed for adults. Preferably a good horror. The only ones I’ve seen thus far have been kiddie movies with my son.

I've only seen one movie in 3D since the 80s and I was pretty impressed by how far they've come. (Monsters vs. Aliens with my daughter and TERESA!!) But it has been getting out of control lately. A 3D horror might be cool!

I would just like to see one movie in 3D that was designed for adults.

I think that might be a bit much, Rusty. Jesus! I have to sort of watch "those movies" in half-squint as it is. Not sure I could take stuff poking out at me and flying in my face. Bad idea. I'm ashamed of you. Bad dog.

You never even gave the idea a chance.

Yeah great, that's what I need, more stuff to hunt for in the sofa cushions. I already can't find the remote half the time, now I'm going to have to search for 3D glasses? And the wii controller, and the battery pack, and the charger and bleah bluh blooann

It'll be so much easier once they start installing this stuff in our heads at birth.

Don't worry, they'll implant something to cure that right up.


Besides all that bull shit, It is just one more trick in a bag of tricks to hide the fact that the mother fuckers don't know how to make a movie anymore. Look at all the pretty pictures and maybe you will forget that the movie sucks... and most do, look how many creamed their shorts over Avatar... the movie was shit, complete shit.

I begin to think that 3D is a gimmick, just like it was in the 50s, and just like in the 50s people will get tired of it and it will go away. When they develop a technology that doesn't require that you wear 3D glasses to view the 3D film, then maybe it'll stick around.

i actually like some of them a lot... that Coreline caroline cureline whatever was a hell of a fucking good movie! i watched it 3 times in 3d... also Avatar was pretty damn good, and Up were really good and i can't wait to watch Alice in wonderland... i know crap like Valetine and that freakign Death movie idk its name... could give 3d a bad reputation... but still some of the best movies from last year were on 3d...

At least Avatar didn't get the Oscar for the best movie, I was afraid that was gonna happen. The special effects were good but let's not get too ecstatic.

Speaking of Tim Burton's ass-sucking, WHAT THE HELL, people? Really? That dumbass movie, Alice in Wonderland made 116 million over the first weekend? I'm trying to discourage Depp and Burton from making films, and you do this shit? Make Wonderland one of the top-grossing films? That has to be the most any film has made in a single weekend. Way to go. Thanks a lot.

Did you see it, Rusty? Is it dumb?

reply | flag *
message 22: by [deleted user] (new)
Mar 09, 2010 08:11AM
I'm seeing it tomorrow. I am way more worried about the Disney influence than the Burton influence. They killed Percy Jackson/Lightning Thief with cheesy dumbness.

ooh. Let me know Sarah! I'm so excited to see it.

You ladies are part of the problem.

I don't love Tim Burton at all but the previews for Alice in Wonderland look really cool! I didn't go see Avatar which should earn me a blockbuster pass.

i'ma go see it today!!! yay!!!!! greatchen! do me a favor and send me a message around 11 reminding me to do somethign k?

Oh yeah. Gretchen, could you also send me an email at approx. 6:30 tonight, so I’ll remember to take those books back to the library? Don’t forget this time. You got sloppy last week and forgot to remind me about my brother’s birthday.

@ Alfonso: sure. I'll be asleep at 11 so it will be a dream message. I assume that's not a problem.

@ Rusty: I didn't forget. It's just that I hate your brother and his birthday.

(I would be best secretary ever.)

Gretchen have you seen the movie "The Secretary"?
tsk. tsk.
I hope you don't mean that kind of secretary!

Ok, I just saw alice... I'm disappointed! I mean is entertaining and all but nothing out of this world... also I think that burton dude has a crush in the debb dude!

@Marie: I love that movie!

@Fonoso: thanks for the update. Was it creepy at all?

BunWat wrote: "Tim Burton didn't have anything to do with Coraline. Kasia am I not understanding you?"

Wait, he didn't? It had that Tim Burton-esquire feel about it... My bad.

@Marie&Gretchen: I love that movie too! 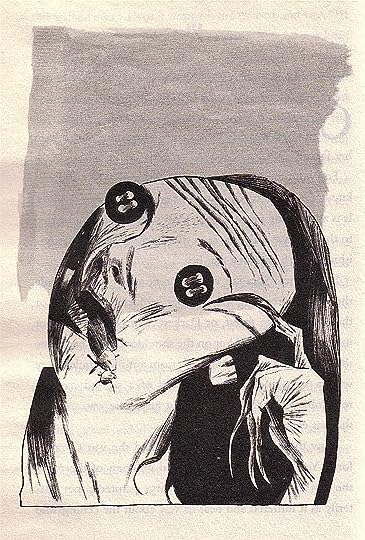 I liked the movie, but the book FREAKED me.

I saw Alice and I liked it. I had the opposite reaction of Alfonso, I think. I was afraid it was going to be too dazzling and showy (like his Wonka--thumbs down), but it was great and not too overblown. I was afraid of Depp's performance being annoying and gratuitous, but it was endearing and believable.

It wasn't too Burtony or too Disney. I absolutely loved the Chesire Cat and Tweedle Dee and Tweedle Dum. The Jabberwock and Bandersnatch were pretty CGI, or whatever you call it, though. I thought it was a sweet story, and the tea party set were awesome.

You people are worse than Hitler.

Thanks Sarah! Was it too creepy for small children?

*SPOILER ALLERT!!!!!* DONT READ IF YOU DONT WANNA BE SPOILED.

tambo, i felt like some of the scenes with Mr. Deb were forced... like they were made to give him screen time and such... i dont think the movie is bad... i think is good but i dont think is all this records breaking good... that's all... also the ending piss me off... when she brakes the old lady delusions... so what? alice has the right to have hers but an ugly old lady dont?

I agree with you about the old lady, but not the Depp time. I was afraid of just that, but I don't think it was the case.