This topic is about Brian Michael Bendis
732 views
Most Read Authors?

Who are your top 5 most read authors? (according to Goodreads stats) 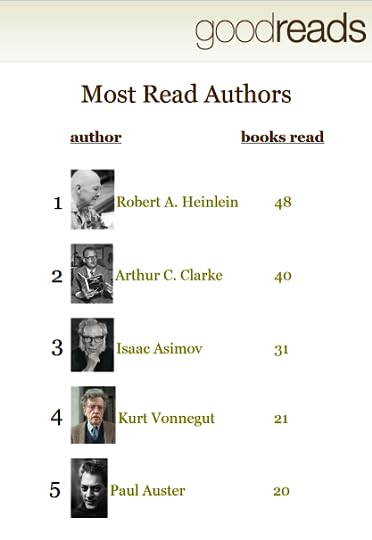 I've actually found there is a bit of difference between my most read authors and my favorite authors.

Mod
I've no idea. I have nearly 50 years of reading behind me.
In no particular order (as I don't know)

Mod
How did you get to that list? I'm not familiar with that page, and I can't seem to find it.

If you click on My Books then below the hand navigation for your bookshelves is Tools and under that you should have Most Read Authors.

Yeah I only just found it myself when I seen this thread, its pretty cool :).

Mod
Ah. Never noticed that down there. Thanks James. Here's mine:

I wouldn't have guessed I'd read as much Butcher as I have King. King's number seems a bit low to me though. I'll have to check a few things I may have read years ago and see if they are on my good reads shelves. But as King was my favorite author before I discovered Jim Butcher (whose my current favorite), it seems appropriate they are sharing the number one spot.

I also didn't realize I read so many Grisham books. A lot of them weren't very good either. Robert Jordan (15), Robin Hobb (14) and Brandon Sanderson (13) are just outside my top five. And the last two being favorites of mine and still writing, will hopefully knock him out of the top 5 eventually..

Mod
Oh and Hajime Isayama is kind of unfair because I can read like a ton of manga in the time it would take me to read one King book.

I expect Jim Butcher and Brandon Sanderson to break into my most read authors. Of the top five David Weber is my only must read author, I don't think I've read anything from Piers Anthony or Michael Stackpole since the early 90s.

Oh, Piers Anthony. I very much enjoyed your books when I was too young to realize how horribly sexist they were.

Unfortunately, the "Most Read Authors" link that Goodreads provides only counts "first-listed author," so if you have certain authors who are usual coauthors (say Weis & Hickman), the second coauthor won't be included in "Most Read."

This also ends up confusing for me because I'm a big fan of the Sten series by Allan Cole & Chris Bunch (8 books), but NEITHER of them shows up in my Most Read list, because certain editions I have list one author before the other. Odd!

I included my top 7 (to include at least 5 prose writers). Interestingly, just below McCaffrey is Alan Dean Foster (Pip & Flinx FTW) and Agatha Christie. I do plan to finish reading the rest of Christie's oeuvre (I'm 44% of the way through all her books). She'll probably end up #1 unless CLAMP comes out with another big series that I want to read.

I keep my manga on a separate site, LNs and YA books are bad enough at bloating.

Out of these authors I got a few more Pratchett books to read same with Bujold but for the most part they are done writing.

Weber and Wo are still prolific so I expect those numbers to go up, so is Bova but I'm not really a fan anymore.

I feel like this isn't really indicative of much because most of those are books in a long series. *shrug* I haven't read O'Malley in a long time. There are just 6 Scott Pilgrim books I've read. Meh.

Yeah the series take the most room here - and Kevin Hearne's numbers are bloated by the short stories and novellas. Kay's the most interesting, since most of his works are standalones. I love his stuff though - Fionavar and a Song for Arbonne are two of my favorite books/series.

I think I might look to see if I can sort this by era somehow, I think my current reading habits are not accurately reflected here.

Not all of them are my favorite authors today but they were at one point.

Am I missing something I thought JK Rowling only wrote Harry Potter...a couple related works and just started on a new series under a pseudonym.

Interesting that an author who wouldn't come to mind at all if you'd ask me about my current favorites tops a list like this. I read his entire Riftwar saga years ago, haven't gotten around to the last 3 or 4 though.

So many Pratchett books! 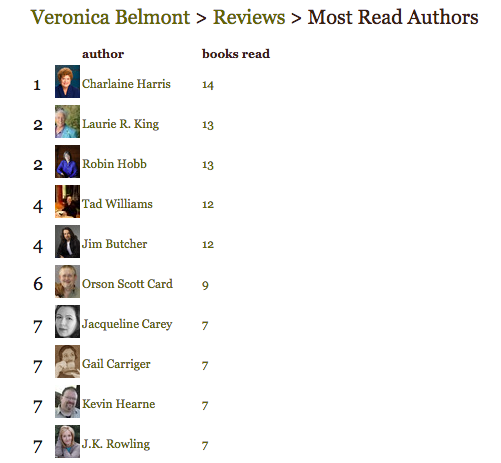 Rob wrote: "Oh and Hajime Isayama is kind of unfair because I can read like a ton of manga in the time it would take me to read one King book."

James wrote: "Yeah that's definitely a big downside to it cause it will also be effected by graphic novels"

Yeah, I know what you guys mean. My next 5 are comic book authors, and are sure to increase, based on my current reading habits-

I think I've read more Mercedes Lackey than this, also Anne McCaffery, but I only added stuff to my shelves from the top of my head-

Aaron wrote: "Out of these authors I got a few more Pratchett books to read same with Bujold but for the most part they are done writing."

Have you been reading The Long Earth series by Pratchett and Baxter?

Dara wrote: "I feel like this isn't really indicative of much because most of those are books in a long series. *shrug* I haven't read O'Malley in a long time. There are just 6 Scott Pilgrim books I've read. Meh."

Yeah, I know this isn't the most accurate indicator of most read authors, but I still think it's fun to see what authors are on everyone's list. Also, it just might motivate people to read more of a certain author to get them in their top 5.

Oh, god. I don't have a single Goosebumps book logged, but I read at least 30-40 of them back in elementary school.

Andy wrote: "4. Robert Kirkman - the collections of the walking dead"

With Outcast, Vol. 1: A Darkness Surrounds Him, I will be reading the first non-Walking Dead title from Kirkman.

Have you read the Walking Dead novels he did with Jay Bonansinga?

I can't imagine anyone catching King but there are a lot of Lawrence Block mysteries, so its possible. Jordan and Crichton are not long for the list, for obvious reason.

The only surprise is the number is so low. But maybe I didn't add all his books when I joined Goodreads.

I was surprised at first, but then I remembered between Bakuman, Death Note and Hikaru no Go ... yeah, that sounds about right.

That's a lot of girly romance.

I guess that's including both his novels and various manga spinoffs.

I'm trying to read through H2 now. I have another 30 volumes to go, so he's going to shoot up the list.

I don't remember reading that many Discworld novels. They all seem the same after a while.

I had to look up who Yamada is. Oh, yeah, giant survival horror series guy.

I was just going to list my top 5, but then I found out I had a four way tie for fourth place.

Louie wrote: "Have you read the Walking Dead novels he did with Jay Bonansinga? "

I stopped picking up the Walking Dead around volume 11. I was watching the TV show and I decided that the comics just do not have the suspense that the TV show nails so well.

Now I look at the TV show as Walking Dead 2.0, a chance to take the best of the books and make something great.

There's a lot of comics writers in there. (I no longer track comics and graphic novels with Goodreads, but I used to.) Let me eliminate the mostly-comics writers. Also, the Scalzi count is inflated because I was counting the separate installments of The Human Division while I was reading them. I'll cut those out.

David(LA,CA) wrote: "It's also interesting to note that it counts books you've listed as "Want to read"."

Um, no it doesn't. It only counts titles you've set as "Read". The link on that page takes you to the books you have by that author in your library, weather you've read them or not.

Andy wrote: "I stopped picking up the Walking Dead around volume 11."

Well, then you've missed some pretty big developments in the comic universe since then. At this point, they are pretty much different stories to me. I still eagerly pick up each trade as they come out. (I ain't got the time/money for single issues.)

Louie wrote: "David(LA,CA) wrote: "It's also interesting to note that it counts books you've listed as "Want to read"."

Um, no it doesn't. It only counts titles you've set as "Read". The link on that page takes..."

You didn't need to do that. It was an honest mistake.

My list got a bit distorted by some writers having their short stories individually listed and by my haphazard way of recording (lots of gaps before 2012 with well over 1000 books read but not included).

I don't have everything in Goodreads yet but so far my top five are:

Aaron wrote: "Am I missing something I thought JK Rowling only wrote Harry Potter...a couple related works and just started on a new series under a pseudonym."

The Casual Vacancy is still under the Rowling name even if her new mysteries aren't.

So someone can still have a list with Rowling with up to 11 books (7 HP, 3 related, and The Casual Vacancy).

But some people read a lot of different authors instead of a lot of single series, so Rowling can easily be in the top for people. She's very far down on my own list, however.

This is so cool! I was pleased/surprised that so many of my top authors are sword and lasery. Of course, I've only been keeping track of my reading since 2004 so we're missing all the Bobbsey Twins, Sweet Valley High, and Babysitter's Club that I read as a kid. :P

Mine are going to be significantly skewed because I didn't log books before I joined/from when I was a kid. If I did, then the woman who wrote the Babysitter's Club books would be my #1 because I read every darn thing she wrote in that world.

Right now, without looking, I bet it's Brandon Sanderson or Robert Jordan. And GRRM would be up there.

Ok, I actually looked at the stat...

I omitted Terry Goodkind out of shame

But after that it's very much fantasy-fan-from-the-90s stuff:

High-five! I said almost the exact same thing the post above you hahaha.

Did you babysit, and carry a shoebox with you? I did....

Jenny (Reading Envy) wrote: "Did you babysit, and carry a shoebox with you? I did...."

terpkristin wrote: "Jenny (Reading Envy) wrote: "Did you babysit, and carry a shoebox with you? I did...."

We were brainwashed! And what do you think of when you see someone wearing black, white, and red? Hahaha, it never leaves you.