I'm about three quarters thru WRL(WRBob) and having a good time. As the number of Bobs grows exponentially, it hit me that I've read a number of other books recently with characters who are sentient spaceships.

Who's your favorite sentient spaceship?

Probably Skuttlebutt, Beta Ray Bill's ship. At the time it seemed to me that this was a straight rip of an L. Neil Smith book where the ship was sentient and the captain in love with it. Memory is dim and Google does not help me dig up the name of the book. In any event, I felt that Walt Simonson (the writer for that part of Thor ) handled the concept better.

Moya (and her son Talyn), from Farscape

Lucy, from Killjoys (not sure is she's truly sentient though). I <3 her any way.

Leesa wrote: "Moya (and her son Talyn), from Farscape

Lucy, from Killjoys (not sure is she's truly sentient though). I <3 her any way."

It just hit me that you love Lucy. Heh. So does John.

There was that episode where Lucy gets corporeal and kisses Johnny, which reminds me of Lovelace from The Long Way to a Small, Angry Planet. I’d totally watch a show with fembot Lucy teaming with fembot Lovelace to fight crime.

I really like HAL, even though he’s a bad guy. It’s not his fault!

One particular sentient ship I really like is from the short story “Damage” by David Levine. The story is told from its point of view. You can read it here: https://www.tor.com/2015/01/21/damage...

I'd forgotten about Lovey in The Long Way to a Small Angry Planet. Was the ship in Aurora by Kim Stanley Robinson sentient? I didn't get to that book when it was the S+L monthly pick.

One of the Supremes must have a thing for sentient ships ;-P

Trike wrote: "I really like HAL, even though he’s a bad guy. It’s not his fault!"

Did you read 2010? Turns out HAL was given a no-win situation and did the best he could.

I've always been weirded out that Dave Bowman basically executed an AI on his way to being judged by an AI (a Monolith.) "Sorry Dave, looks like we'll have to kill humanity for that one!" *pushes sun to nova*

John (Taloni) wrote: "Trike wrote: "I really like HAL, even though he’s a bad guy. It’s not his fault!"

Did you read 2010? Turns out HAL was given a no-win situation and did the best he could."

Yeah, it was 2010 that redeemed HAL for me and kept him from remaining a one-note villain. Bowman also atones for what he did to HAL in 2001, so win-win for both of them. (view spoiler)[They merge, a la Decker and V’ger in ST:TMP, to become Halman. (hide spoiler)]

The ship that first came to mind with the question was Dora from The Number of the Beast.

Phil wrote: "The ship that first came to mind with the question was Dora from The Number of the Beast."

Was she an explora?

Well. there was a boot(s) since she was a modified air car.
My shitty memory ruins the whole joke though because I just looked it up and she was called Gay Deceiver. I must have got Dora from another book.

You're on solid ground. Wiki entry:

Dora (computer) – Time Enough for Love, The Number of the Beast,The Cat Who Walks Through Walls

Also, I snorted at the "explora" bit.

I love Gay Deceiver! Except she's not really sentient - only in Oz. All Heinlein's AIs are like nosy, really smartass teenagers, which is fun.

Any of the minds from Iain M. Banks Culture books.

AndrewP wrote: "Any of the minds from Iain M. Banks Culture books."

But especially the Falling Outside The Normal Moral Constraints from Surface Detail and the Gray Area from Excession for me.

Gray Area also gets my vote.

There's an indy series called the Aeon14 universe, with sentient AI. The most powerful AI is a ship, and I'm almost positive his name is Bob.

Jack McDevitt's books often have ships that have AI built in that certainly seem sentient, if quite docile.

I was talking to friend about this tonight and he mentioned The Ship Who Sang by Ann McCaffrey as his favorite.

Phil wrote: "I was talking to friend about this tonight and he mentioned The Ship Who Sang by Ann McCaffrey as his favorite."

I get it, but the ship is run by a person - one so handicapped that becoming a ship's intelligence was preferable to living otherwise. The Ship Who Sang is not an AI.

The Wikipedia entry: 'The protagonist of the 1969 novel and all the early stories is a cyborg, Helva, a human being and a spaceship, or "brainship".'

Mark’s OP link includes such ships, particularly McCaffrey’s. It’s not AI, but as a larger group of “sentient ships”, sure. Helva can’t live outside her container, so she is the ship, for all intents and purposes.

In The Human Division (edit: The End of All Things) Scalzi has a guy who, if I recall, is taken hostage and his brain is put into a box and hooked up to run a spaceship. That’s a half-step between Helva and Bob.

Come to that, Bob isn’t an AI, either, strictly speaking. He’s a human brain transcribed (transliterated?) into software. That’s different from but related to cyborg ships.

The various versions of organic ships such as Moya and Talyn from Farscape aren’t AI, either. There’s a short story I read years ago (I think called “Fetch”) that features dogs gengineered into large organic spaceships, and there have been whales-as-spaceships, too.

What other variations of “sentient spaceship” might there be?

Mod
Third Fish and New Fish from the Binti trilogy are fish-like biological spaceships that are sentient.

I can only remember the alternative name meatf&*£% :-)

I enjoyed the Brainship books as a kid, but I read "The Ship Who Sang" a few years ago and it made me feel pretty icky, especially as someone with a disability.

^Yeah, Anne got flak for that from advocates for the handicapped. The setup hasn't aged well.

It may be worth noting that it was 1961, Anne was at the start of her career, and she picked a technological world with dystopian elements. Dystopias were fairly common at the time. It's more a bit of lazy storytelling than social commentary.

I can only remember the alternative name meatf&*£% :-)"
There's another one somewhere called "Do Not Mistake". The full name is only quoted once - its something like "Do Not mistake My Current Placid Demeanour . . ." and it is a fully weaponed Special Circumstances agent. Someone got the full reference please?

from The Hydrogen Sonata

Brendan wrote: "Mistake Not My Current State Of Joshing Gentle Peevishness For The Awesome And Terrible Majesty Of The Towering Seas Of Ire That Are Themselves The Mere Milquetoast Shallows Fringing My Vast Oceans..."

“I mean, if you’re not into the whole brevity thing.” 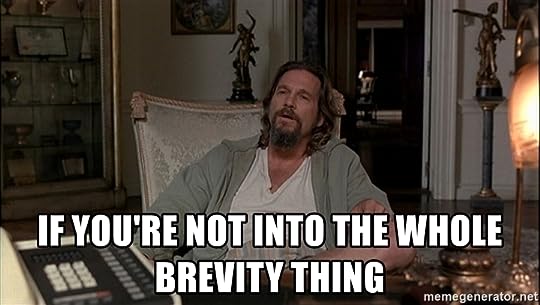 AI
JB6847½ (aka “Scraps”) in short story “Damage”
HAL (Discovery) in 2001: A Space Odyssey
Lovelace in The Long Way to a Small, Angry Planet
Lucy in Killjoys
Verity in Pilot X
Berserkers in Berserker
Minds from The Culture (eg. The Hydrogen Sonata)
Justice of Toren in Ancillary Justice

Brendan wrote: "Mistake Not My Current State Of Joshing Gentle Peevishness For The Awesome And Terrible Majesty Of The Towering Seas Of Ire That Are Themselves The Mere Milquetoast Shallows Fringing My Vast Oceans..."

The exchange where the Mistake Not... reveals its full name...

“~I never did tell you my whole name, did I?
~You did not. Many have remarked that your name would appear to be part of a longer one, and yet, unusually, even uniquely, nobody has heard the whole of it.
~May I tell you it now?
~Please do.
~My full name is the Mistake Not My Current State Of Joshing Gentle Peevishness For The Awesome And Terrible Majesty Of The Towering Seas Of Ire That Are Themselves The Mere Milquetoast Shallows Fringing My Vast Oceans Of Wrath. Cool, eh?
~Such braggadocio. That smacks of smokescreen, not power.
~Take it as you will, chum. But how many Culture ships do you know of that exaggerate their puissance?"

Rick wrote: "Brendan wrote: "Mistake Not My Current State Of Joshing Gentle Peevishness For The Awesome And Terrible Majesty Of The Towering Seas Of Ire That Are Themselves The Mere Milquetoast Shallows Fringin..."
Thanks, guys.

I can only remember the alternative name meatf&*£% :-)"

Spoiler tagged for those sensitive to the f-word (seriously??):

(view spoiler)[[tight beam, M16.4, tra. @n4.28.858.8893]
xGCU Grey Area
oGSV Honest Mistake
There. I am on my way.
∞
xGSV Honest Mistake
oGCU Grey Area
Not before time.
∞
There was work to be done.
∞
More animal brains to be delved into?
∞
History to be unearthed. Truth to be discovered.
∞
I would have thought that one of the last places one would have
expected to find on any itinerary concerning the search for truth
would be inside the minds of mere animals.
∞
When the mere animals concerned have orchestrated one of the most successful and total expungings of both a significant part of their own species and every physical record regarding that act of genocide, one has remarkably little choice.
∞
I’m sure no one would deny your application does you credit.
∞
Gosh, thanks. That must be why the other ships call me
Meatfucker.
∞
Absolutely.
Well, let me wish you all the best with whatever it is our friends
might require of you.
∞
Thank you.
My aim is to please . . .
∞
(End signal file.)
(hide spoiler)]

PS: Here's a wikipedia listing of the names of all the Minds in the Culture series: https://en.wikipedia.org/wiki/List_of...

Larry Niven had at least one cyborg ship in a couple of his Known Space stories in Tales of Known Space: The Universe of Larry Niven -- The Coldest Place and Marooned in Hell were both about a pilot (Howie) taking his ship (Eric) to gnarly locations in the solar system -- the surface of Venus, e.g. Eric had been a spacer who suffered some kind of horrific accident and now existed solely as a brain in a jar controlling Howie's ship.

Nobody mentioned the Tardis yet? And from the rumor mill it sounds like the Millennium Falcon may get her personality defined more in the upcoming "Solo" movie.

My infamously bad memory could easily be screwing this up, but wasn't there a Hugo nominated short story recently about a ship nervous about getting an upgrade? And another of the puppy nominations had one about a sentient war ship? I'll try and look them up, but maybe someone else knows off the top of there head.

If I remember correctly, I think AIDAN from Illuminae fits the bill