Mod
Sherlock Holmes is a fictional private detective created by British author Sir Arthur Conan Doyle. Referring to himself as a "consulting detective" in the stories, Holmes is known for his proficiency with observation, forensic science, and logical reasoning that borders on the fantastic, which he employs when investigating cases for a wide variety of clients, including Scotland Yard.

Under Mystery Reads: Msg 6 is a list of reads:
https://www.goodreads.com/topic/show/...

Thought I would put this back under Buddy Read. Since it's Winter and we seem to like Detective/Mysteries during this time and Anne has brought it back to the forefront, I thought why not:

The Adventures of Sherlock Holmes (1892)
Published 31 October 1892; contains 12 stories published in The Strand between July 1891 and June 1892 with original illustrations by Sidney Paget:

Mod
This is great. I have been reading his books for fun.

As a rule always start at the beginning. A Study in Scarlet introduces the reader to Sherlock Holmes and his infallible methods.
It is addictive and I could not put down the book untill I finished the whole series!

I am a big fan of the series and 221B Baker Street was one of the first places I visited here. It was heartening to see more like-minded fans queuing up outside, knowing fully well that the whole set up is fictional!

Mod
I opened this because Member Anne and Patrick were reading I believe the same book.

Thank you Catherine. I couldn't think what to call this thread so I'm steeling your word 'series'

Mod
I just saw this thread. I'm a big Holmes fan. Where will we start from? :-)

Mod
I just read A Study in Scarlett and The Sign of the Four. I'm on the Adventures of Sherlock Holmes now.

I read the Hound of Baskervilles when I was in middle school but I'm excited to reread it.

I think I'll jump in with you. I read a lot of Sherlock Holmes stories. Like Catherine said, it is addictive. And funny also.

Do we have an order to read them?

Mod
The order of the books can be found on goodreads.

I am reading the Audible collection The Complete Sherlock Holmes by Arthur Conan Doyle, which I started last month. I've read them all individually in print a few times over the years. But, when I saw the Audible collection was narrated by Simon Vance, I had to have it. This time through I've gotten through 'A Study in Scarlet' and 'The Sign of the Four' so far. I'm reading them bit by bit between other books. So, it's an over time read.

And yes, The Hound of the Baskervilles is probably my favorite.

Mod
I have read all four Sherlock Holmes novels -A Study in Scarlet, The Sign of Four, The Hound of the Baskervilles and The Valley of Fear, and also the The Adventures of Sherlock Holmes.

Out of all The Hound of the Baskervilles is my favourite.

I've read A Study in Scarlet and The Adventures of Sherlock Holmes.

I'll join in soon reading The Sign of Four. My edition is from the library and has an introduction by Graham Greene. Published by Doubleday & Company in 1974.

I'm currently reading The Complete Sherlock Holmes which in my edition spans over 1408 pages and includes all four novels plus several collections of short stories such as The Adventures of Sherlock Holmes, which I've just finished today.

I love both Watson and Holmes, as I find Sherlock quite funny, although sometimes at other's expense 🤣 I find the stories witty and cleverly written, however you do begin to find them somewhat tedious when you read them in speedy succession. Here I've found it easier to listen to audiobooks in between juggling with the huge brick of a book 😂 also, I agree that it is best to start off with the four novels in chronological order, as the other stories frequently refer to the events of these.

I'm gonna read The Memoirs of Sherlock Holmes next, starting with The Adventure of Silver Blaze.

Mod
I am now reading The Return of Sherlock Holmes, probably one chapter per day.

Mod
After reading the first story, I realize that reading only one chapter a day is impossible!

I recently finished The Sign of Four and found the writing much easier to follow than A Study in Scarlet. The story is written in a more fluid manner with all parts fitting well together. I liked the descriptions of India during Small's narrative of events.

Mod
I’m going to have to put Sherlock on hold. There’s so many other books coming up in April I’ve been dying to read like Crime and Punishment!

Mod
I totally understand. Sherlock will still be there after you read Crime and Punishment.

Mod
:) It is hard to choose sometimes which book to read when there is so many good ones suggested!!!!

Mod
I just finished The Return of Sherlock Holmes, which was a lot of fun.

I have read all the Sherlock Holmes stories around three years back courtesy The Complete Sherlock Holmes book I and II. It took me an entire year to complete them but did not have one boring moment while reading them. Enjoy!! :D

Mod
That is good to hear, Tahera. I like to think of the Holmes stories as dessert after some heavy reading.

Rosemarie wrote: "That is good to hear, Tahera. I like to think of the Holmes stories as dessert after some heavy reading."

It was both for me....I don't think I was reading anything else while I was reading this series but it had everything to keep me engrossed :)

Mod
I like the rapport between Watson and Holmes.

Interesting discussions - as a result, I’ve just got a copy of A Study in Scarlet so I can read about the characters when they were first introduced.

I'm assuming, the stories are put together in chronological order, and was therefore a bit astonished to discover, that it isn't until this book, Sherlock's brother Mycroft has been mentioned. I like this part of the book, because it seems to focus more on our two protagonists and their relationship.

Mod
I enjoy Holmes' disguises, especially when Dr. Watson fails to recognize him. 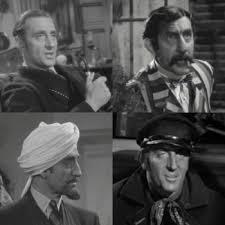 Hi, new here. I have read these books yet I never found this phrase “Elementary, my dear Watson” anywhere. Where did this originate? Was it used in a TV series?

Well done Shriya! It was probably just coined together by enthusiasts http://www.todayifoundout.com/index.p...

Brilliant deduction Shriya or shall we say SHriyalock Holmes?

Mod
Did you know?

Published in 1892 [The Adventures of Sherlock Holmes] was the first collection of the detective's cases that had originally appeared in Strand Magazine and was dedicated to Doyle's 'old teacher' Joseph Bell, considered the inspiration or model for Holmes.

Holmes never says 'Elementary, my dear Watson.' The closest he gets is in 'The Crooked Man' when after Watson cries ... 'Excellent!' Sherlock dryly replies, 'Elementary.'

Holmes solved hundreds of cases, including one ('The Bruce-Partington Plans') that earned him a private audience at Windsor with Queen Victoria from which he returned with a handsome emerald tiepin.

Originally Sir Arthur Conan Doyle named the sleuth Sherrinford but changed his mind – perhaps because there were well-known Nottingham cricketers called Sherwin and Shacklock and the author was a big fan of the sport.

After two years of writing the popular stories, the Doyle was sick of the detective, tried to kill him off, and complained ‘it takes my mind from other things’.

The Speckled Band is the most popular Sherlock Holmes story and was Conan Doyle’s favorite.

reply | flag *
message 39: by [deleted user] (new)
May 30, 2018 11:14AM
Hi. I’ve read the first two novels: Study in Scarlet, and the Sign of the Four.
And, because I’m going step by step, reading all of Sherlock Holmes stories, whether novels or short stories, I have not read the last two novels so far.
I made it a reading goal of mine to finish everything written by Doyle about S.H. simply because I find the stories so entertaining.
And, yes some are a bit less exciting, one might say, especially in the genre of the short stories, however, all in all I love this character of Sherlock.
And, I cannot wait to get to the Hounds of Baskerville, because I think it is a really good one.

The Speckled Band and The Blue Carbuncle were one of the first ones I read..

reply | flag *
message 41: by [deleted user] (new)
May 30, 2018 12:21PM
Catherine wrote: "The Speckled Band and The Blue Carbuncle were one of the first ones I read.."
Oh, the Speckled Band is by far one of my favorites!
Also, a good one as well, is the Adevntures of the Copper Beeches. You should check it out.

Done that already:)
They are all great stuff!

Lesle wrote: "Did you know?

Published in 1892 [The Adventures of Sherlock Holmes] was the first collection of the detective's cases that had originally appeared in Strand Magazine and was dedicated to Doyle's '..."
Wow! Never knew that! Thanks for sharing

Sorry for reviving this ancient thread, but I thought this might be interesting for Sherlock afficionados 🙂

I just finished Stephen Fry's Victorian Secrets, which, other than being a very interesting look into the lives and ways of british people during the victorian period, also concludes with a chapter about Arthur Conan Doyle and Sherlock Holmes. Just a tip 😉

Mod
Thanks for the info, Anne.

Mod
Anne, I haven’t read any Sherlock Holmes books myself, but last year I read Dust and Shadow: An Account of the Ripper Killings by Dr. John H. Watson, which is supposed to be like a Holmes story told from Watson’s POV about the Jack the Ripper murders. That book is contemporary, but the story made me curious about actual Holmes books. I believe there is praise attached to the book about how the author, Lyndsay Faye, captures Doyle’s characters and the details about the Ripper murders very well. I don’t know if I mentioned the book here, when I read it last spring, and some Holmes fans might enjoy it.

That sounds great Samantha, thanks for the heads up! Another on on the TBR 😂🙈

Lesle - of course I won't forget about my favourite buddy read 😉