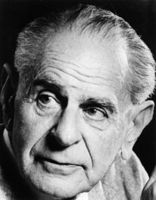 “We should realize that, if [Socrates] demanded that the wisest men should rule, he clearly stressed that he did not mean the learned men; in fact, he was skeptical of all professional learnedness, whether it was that of the philosophers or of the learned men of his own generation, the Sophists. The wisdom he meant was of a different kind. It was simply the realization: how little do I know! Those who did not know this, he taught, knew nothing at all. This is the true scientific spirit.”

70 likes
All Members Who Liked This Quote