The Author Publishes Herself in This One...and Wins a Goodreads Choice Award

Posted by Cynthia on December 5, 2016
37 likes · 22 comments
Share
Share on Twitter
The Goodreads Choice Awards highlight the most-buzzed-about books of the year in their respective genres, from fiction to fantasy, history to horror. Many of the authors who take home the award are established writers with a large fanbase—and a publishing team who worked hard behind the scenes to promote the title throughout the year. Which is why it’s such an accomplishment when a self-published author without that kind of audience or marketing budget gets nominated—and wins. 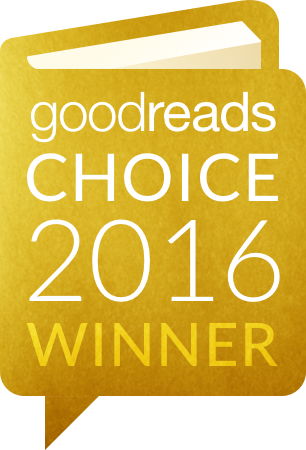 Amanda Lovelace is this year’s only self-published author to take home a Goodreads Choice Award. Her book, the princess saves herself in this one, won the award for Best Poetry. "There simply isn’t a word that can cover the joy I feel,” says Lovelace when informed she had won the award. “To be eligible for let alone win the Best Poetry in the Goodreads Choice Awards, which I have been voting in since they were established, is...well, "honored" doesn’t cover it." 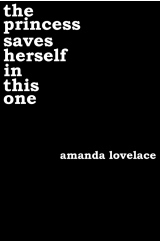 Error rating book. Refresh and try again.
Rate this book
Clear rating
1 of 5 stars2 of 5 stars3 of 5 stars4 of 5 stars5 of 5 stars
Lovelace is right in understanding that making it into the list of 400 nominated books–out of the hundreds of thousands published each year–that make up the nominees of the Goodreads Choice Awards is already a major achievement. To do this, a book needs to have achieved a certain level of success in the months leading up to the awards. Lovelace recalls that she built consistent awareness throughout the year using her blog and social media to cross promote her activity and get the word out. “I’m a longtime online book blogger and I’ve always had a steady following across social media,” explains the author, who has been writing poetry since she was 10 years old. “I often posted pieces of my writing on my various platforms [so] all my followers knew I was a writer and that I was working on a poetry collection.”

This loyal online following meant there was an immediate demand for her collection upon publication in April, and the buzz she built in her community caught the attention of a Goodreads book club, which selected the title for their group to read in July. "As a way to include more people, [the moderator] asked if I could offer the e-book for free for any amount of time. I happily obliged, running a sales promotion that made my book free for as many days as I was allowed."

Lovelace had already made her book available though Kindle Unlimited before the book club selection, but wasn't opposed to making it more accessible. "As an author, making your book free of charge might not seem attractive for multiple reasons, but it really does do wonders for promotion! The more people who can access your book, the more reviews that are written—the best “signal boost” you could possibly hope for." 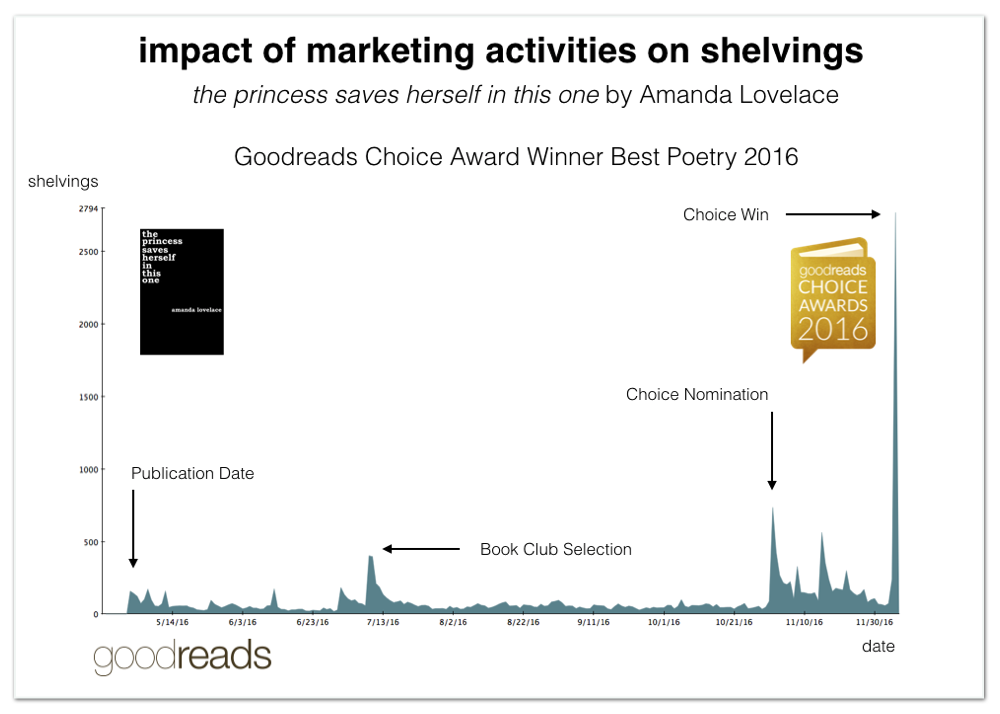 Lovelace also credits her engagement with her readers on social media with the success of her book, and she encourages other authors to use social tools as much as possible. "Interact with your readers and learn what they like about your work and why! Don’t automatically assume you know what your selling points are—as an author, you’re automatically biased against your own work, so getting some honest perspective is invaluable to you and the promotion of your work," she says.

The book was shelved nearly 2800 times the day the Goodreads Choice award was announced. Lovelace doesn't have specific plans for including the Choice Awards in her immediate promotions "aside from gently plastering it everywhere I can!" The award is not the only indicator of her writing and marketing success, as Andrews McMeel acquired the book before it was even a nominee, and plan to re-release it in February 2017. Lovelace is excited to be joining her Andrews McMeel family, as she’s read a few of their authors, including fellow Choice nominees r.h. Sin, Sierra DeMulder, and Michael Faudet. "I felt incredibly privileged to have been grouped with such uniquely talented modern poets."


...about reading your reviews: "If you choose to read your reviews, you have to grow a thick skin and learn not to take the negative ones to heart, unless you think it will help to improve your craft.”

...about promoting yourself: “Promote your work as you see fit, but don’t forget that an author isn’t the only thing you are. Too many writers are too impersonal on social media.”

...about taking it all in: “Once your work is out there, it’s no longer just yours. Readers get to decide what it’s all about and why it’s worth reading.”

That last comment, about how the readers decide what they like, is very true. I love getting feedback from readers about my book, and discovering how they may see the heroine and all the characters so differently than I intended.

You have to expect some bad reviews. If you check some of the most famous books out there they will have bad reviews, and will not sit well with a certain amount of people - that's just how it is. i.e Mockingjay, The Lord of the Rings, Divergent, Game of Thrones etc. All of them have one or two star reviews.

I agree that the author should never react to negative feedback. Individuals cannot be expected to have the same taste and same reaction to your work. The author just needs to believe in herself/himself.

I couldn't agree more with her thoughts that authors need to be more 3D in their self-promotion. Congrats, Amanda, on a job well done!

I totally agree with having a thick skin. Feedback is the best way to make our work stronger.

I agree with the idea that an author can have many aspects to their life. Being a new author, of course I want to promote my book. However, I am a known wildlife artist and I enjoy sharing art, information about animals and a western lifestyle in general, with my readers. It can certainly lead to some interesting discussions.

Congratulations on working so hard on every aspect of this book. It's paid off, for sure!

This story gives me fresh hope for my own work. It's so heartening to hear a success story like this. One woman, working from her own blood, sweat and tears, got this far. It's wonderful!

Yup! I am also seeing feedbacks as areas where one can grow from different perspectives.

Firstly, you're a human being, surely, then an author?
Facing up to severe criticism's a good thing. Helps you to get used to it. You should post some of your writing to reddit.com I did a few week's ago. I got no constructive feedback at all! It was only a short story, and going by the feedback I'd had elsewhere, it wasn't that bad!

Congratulations! You're an inspiration to everyone else who hopes to self publish!

Wow, congratulations! I wish you all the success in the world! <3

Congratulations! I also do believe it's important to interact on social media with readers. Most of my social media is spent on author's pages. I like the simple questions like what are you doing today? I had one particular author send me a friend request. I was so excited that I bought her series that she released. I fell in love with her books! I never would have know about her if she hadn't sent me a friend request.

Score for the Indie author yet again. Terrific achievement. Bravo.

I'm using social media also, in the same way. I found a very active Facebook site that specialises in my market, the Jewish reader. I take part, only mention my book once in a while, and it works. My own FB page has all about my book, so I get quite a bit of exposure, without being an outright shill.

On the other hand, do you really want to be in touch with everybody who buys your book? Or everybody who wants you to read their own work and tell them what they think about it?

Congrats! This is wonderful news. I'm a poet and fiction writer and I'm planning on releasing a poetry book on the theme of women, in a few months. I had some concerns that poetry is hard to sell, but reading this it's given me hope that poetry is still very much in the news.

The Recusants - Amazon Kindle Store. Give it a read and let me know you thought, would love to hear them.

Congratulations, this is just great. It’s hard to get a reward when you don’t have much money for advertising. I also dream of publishing my book, but so far, it’s tough to write it myself, especially without experience. I heed guidance, so sometimes I send chapters of my book to this service https://ukessay.com/write-my-essay where professional editors check my work. I've never written books before, so it’s hard for me to be sure that I'm doing everything right. Hopefully, my book will be finished soon. But I’m thrilled to see when the writers succeed.