The Impact of Goodreads Choice Awards for Authors and Publishers

Posted by Cynthia on December 10, 2015
35 likes · 6 comments
Share
Share on Twitter
For authors, winning a Goodreads Choice Award—the only major book awards chosen by readers—represents a tremendous achievement. But the impact can be far greater than most people realize. 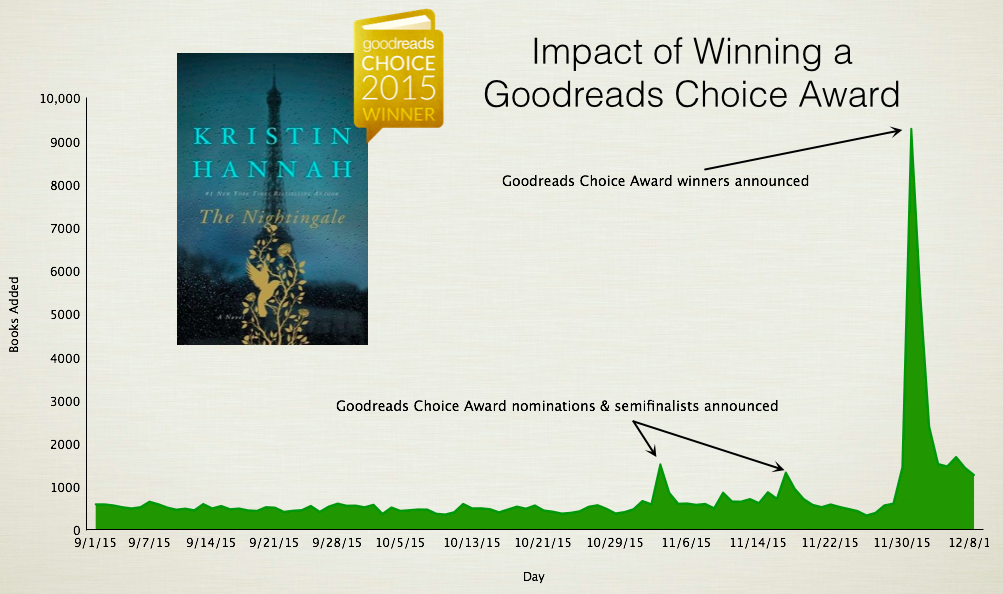 Before its win, about 475 people were adding The Nightingale to their shelves each day. Compared to most other books, this is impressive (especially for a book published nine months earlier) and enough to make the book a bestseller. Additionally, the book has really resonated with readers, boasting an almost-unheard-of 4.53 average rating based on more than 83,000 ratings. (The more people rate a book, the harder it is to maintain a very high average rating as no book is the perfect fit for every single reader.)

But the Goodreads Choice Awards was about to take it even further. On the day it was announced as the winner for Best Historical Fiction, about 9,300 people added it. That’s more than an 1800% increase!

Perhaps more importantly for The Nightingale, it’s experiencing a step-level jump in people adding the book on Goodreads post-awards, with about 1,500 people now adding it every day. If this is the new normal for The Nightingale, it could mean that book is poised to break out into the mainstream in a very big way. In fact, just this last week after the Goodreads Choice Award winners were announced (and after 43 weeks on sale), it shot to #1 on the New York Times Bestseller List (combined print and e-books) for the first time.

“The end of the year is a crucial time for book promotion,” says Lisa Senz, a member of the marketing department of St. Martin’s Press, the publisher of The Nightingale. “We know that a lot of people are looking for great books as gifts, so we’ll dedicate marketing budgets and promotions to get our books on people’s shopping lists. But it’s also a time when commentary about best books of the year can propel a book into the mainstream, which then translates into sales the following year. This is significant as once a book reaches that kind of awareness, you can reach the more casual book buyer who wants to buy the book everyone is talking about. For The Nightingale, winning the Goodreads Choice Award is a key catalyst for helping get to that kind of level.”

Based on its trajectory – and the kind of audience it appeals to – some of the Goodreads team are predicting that The Nightingale will be The Help of 2016. The Help was another work of historical fiction (and Goodreads Choice winner) which was the sleeper hit of 2009 and went on to dominate the bestseller lists in 2010.

For a book like The Nightingale, winning the Goodreads Choice Award is especially important. As Kristin Hannah herself said in a recent post on Facebook, “Most year's best lists are compiled by critics who don't even consider commercial fiction (especially novels by, for, and/or about women), so it is so important—and meaningful—to hear what real readers love.”

Major Bestsellers Get a Surprising Boost Too

The Nightingale wasn’t the only book to see such an enormous boost in popularity thanks to the Goodreads Choice Awards. Even the biggest bestseller of the year, The Girl on the Train, saw increased interest following its win. Who knew that there were still people out there who hadn’t yet discovered this book? 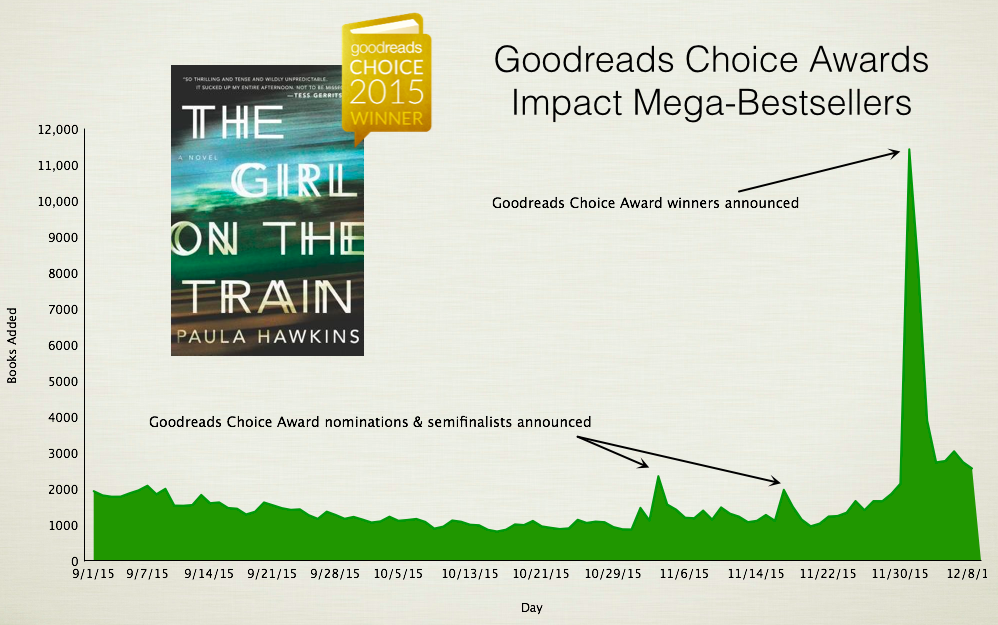 Being a nominee in the Goodreads Choice Awards can help break out a book too. Take a look at what happened with Girl at War by debut author, Sara Novic. Before being nominated for the Best Fiction award, around 20 people were adding the book to their shelves daily. As each round of voting was announced, it drove a huge spike in people discovering the book and adding it to their Want to Read shelf. 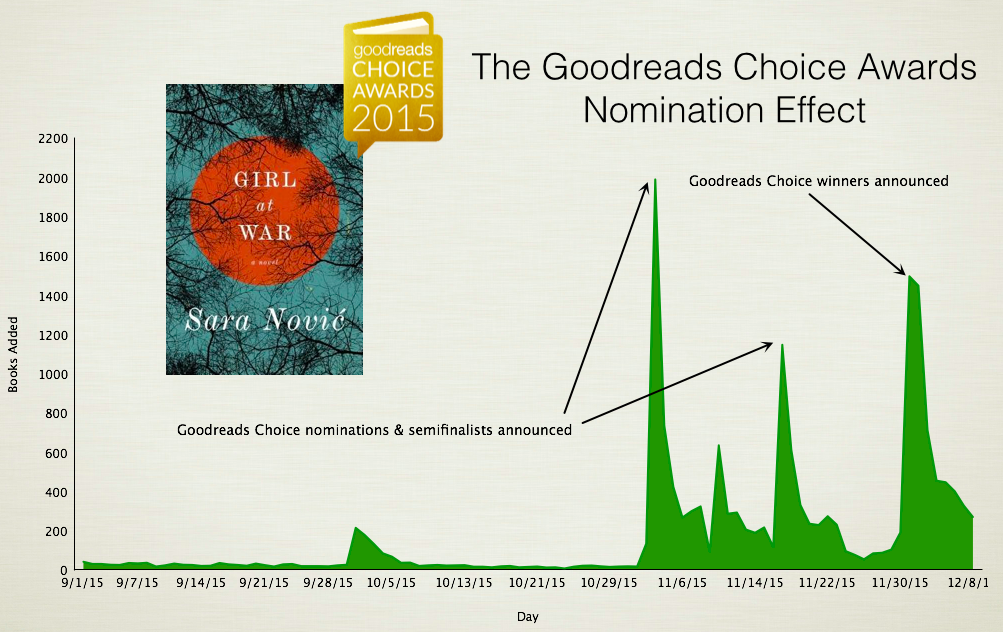 What should authors and publishers understand about the Goodreads Choice Awards?

Being nominated for a Goodreads Choice Awards is the result of several factors:


If you are nominated or are a winner, leverage the Goodreads Choice Awards by letting people know about it. Use it in your marketing. As you can see from the graphs above, readers love to know about books that other readers say are good. It’s the ultimate word-of-mouth endorsement.

Next: Marketing Tips and Advice from Sarah McCoy

You might also like: How St. Martin's Press Doubled Down on the Success of The Nightingale to Take it to Greater Heights

Regardless of whether Goodreads users are nominating the book or marking it as 'Want to Read' being nominated for the Goodreads Choice Awards can benefit the author and increase book discoverability which in turn has a long tail effect.

Nice idea.... but just how does a book get submitted or nominated?

What is the process for nomination, and what are the categories? Also, are you going to be promoting the Goodreads Awards on social media?

Does an author need be spotted by the Goodreads team or do I need apply? I have over 1400 people marked to read my history/mystery novel The Royal Secret to date and 27 reviews with a 4* rating so far having done four giveaways now.

Opening Round nominations are based on ratings and reviews from Goodreads members throughout the year, so it is not necessary for authors to submit a book or apply. There are 20 categories in the Choice Awards (see the winners in each category here: https://www.goodreads.com/choiceaward...).

I wish you had Visionary Fiction and Inspirational Non-Fiction categories!