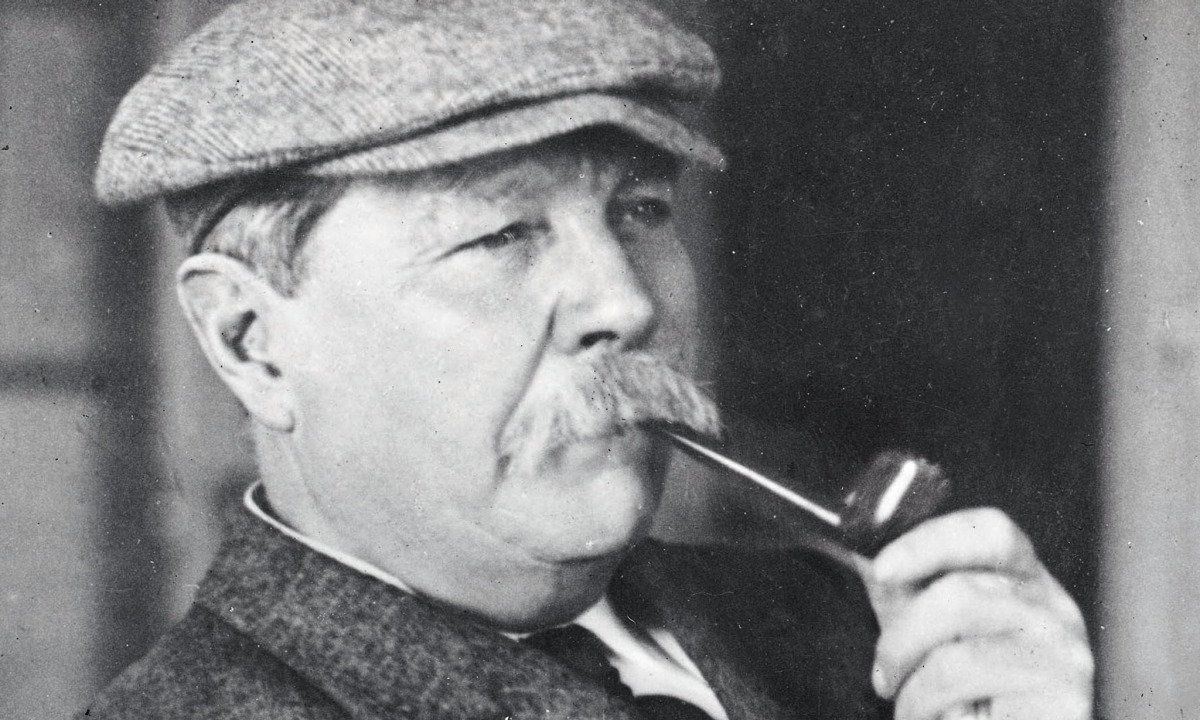 1. He compared Sherlock Holmes—arguably his greatest creation—to pâté de foie gras.
...And Doyle really hated pâté de foie gras. He told a friend, "I have had such an overdose of [Holmes] that I feel towards him as I do towards pâté de foie gras, of which I once ate too much, so that the name of it gives me a sickly feeling to this day."

2. We live in a world with Doyle's fiction because no one wanted him as their doctor.
If at first you don't succeed at being a doctor, become a world-famous novelist! After getting his medical degree from the University of Edinburgh Medical School and serving as a ship's surgeon, Doyle opened his own practice in Southsea. Hardly any patients came, so he began writing fiction in his free time.

3. Doyle and Peter Pan author J.M. Barrie were on the same cricket team.
The team was called the Allah-Akabarries, a combination of Barrie's name and an Arabic phrase meaning, "May the Lord help us." The two men met at university and remained lifelong friends.

4. He once bought a car without ever having driven one.
Best way to learn, right? Doyle was one of Britain's early prominent motorists, and he quickly took to the emerging form of transport, entering an international road competition in 1911.

5. He spent a million dollars trying to convince the world that fairies were real.
Not only did Doyle believe fairies existed, he worked pretty tirelessly to make other people believe too. His million went to promoting the authenticity of the infamous Cottingley Fairy photographs—a hoax, if you're a skeptic, and not a true believer like Doyle—and he later wrote a book called The Coming of the Fairies.

6. His knighthood was not for his fiction.
King Edward VII knighted him in recognition of his nonfiction pamphlet defending British actions in South Africa during the Boer War.

7. He was an amateur detective.
When he wasn't writing about Sherlock Holmes (or fairies), Doyle tried his hand at solving crime using what he called the "Holmes method." In The Curious Case of Oscar Slater, an actual case that occurred in the real world, he uncovered new evidence and recalled witnesses—though Scottish authorities were not especially keen on any of his theories.

8. Doyle and Harry Houdini had a falling out over mediums.
Their friendship showed cracks early on, when Doyle, ever the believer in all things mystical and other-worldly, insisted his illusionist pal had the "divine" gift of dematerialization. By the time the skeptical Houdini began debunking mediums on stage, their kinship had vanished—or dematerialized.

9. If you want to do as Doyle wished, remember him for his psychic work—not that detective guy.
Ten of his sixty books were about spiritualism, and as he got older, Doyle repeatedly expressed that his psychic work should be his greatest legacy. (Why? See earlier pâté de foie gras story.)

10. His last words were whispered to his wife: "You are wonderful."
Doyle died peacefully at his home at Windlesham Manor on July 7, 1930. His wife of 23 years, Jean Elizabeth Leckie, was by his side.


*Rest assured, we eliminated the impossible and took what remained, so no matter how improbable, we know this must be the truth.
Like · 522 likes · 65 comments

I had no idea he'd been a Doctor. Amazing tidbits.
Great to have insights about the person behind the writing.Thanks.

this was lovely to read, thank you.

Who on earth would believe such an intelligent man was fooled by the two girls over the Cottingley fairies hoax !!

This was very interesting, I've learned so much!

Too much Absinthe perhaps......

Interesting! I knew everything but that he'd spent a million dollars investing in proving the fairy hoax. Wish he would have written more Sherlock Holmes stories instead.

There are some very interesting things here. Thanks for the input! I love reading his books! What a genius!

Conan Doyle is one of the greatests writers ever, but remember that Edgar Allan Poe invented this literary genre ¡46 years earlier! than CD with the Auguste C. Dupin trilogy: The Murders in the Rue Morgue, The Purloined Letter and The Mystery of Marie Roget. Hats off...

9. If you want to do as Doyle wished, remember him for his psychic work—not that detective guy.

I read a bio about him, that said that his biggest dream was to be recognized for his historical novels.

11. his book The Lost World is behind the jurassic park movies, which is why the second movies is called "the lost world"

I love that his last words were "you are wonderful" to his wife! So beautiful!

The last was the best...

How interesting! This makes me want to learn more about him and his psychic/spiritual work. The fairy belief is enticing too!

A medical degree AND a gifted writer? What an intelligent, and talented man! He was definitely born with a gift :)

A number of authors get tired of writing about their creations. Some kill them of like Doyle and live to regret it. I'm glad that Holmes was found to be alive and that more stories were written about Holmes

And of course, we all know what happens when someone says they aren't...

He was definitely a fascinating person and a gifted author. He ranks up there among my favorite authors. I was unaware of the hoax he invested so much in. And I never knew that he actually didn't like the Holmes character much. Maybe that's a lesson, the characters we create, if we hate them then they will be beloved by millions. I'm going to start hating all my main characters now.

This is great. I would live a small list of fun facts with a post or quote on a classical author's birthday.

Ha! I knew number one. The rest... well, you learn something new everyday, don't you?

Ellen wrote: "I love that his last words were "you are wonderful" to his wife! So beautiful!"

crazy crazy... he spent a million on fairies? he knew author of peter pan and he knew Houdini? crazy...

Thanks for including this it was very interesting.

Love the footnote at the end

He was also close friends with Bram Stoker and knew Oscar Wilde as well.

I enjoyed reading this. I knew some of this; that he was a doctor, was not particularly proud of his Sherlock Holmes novels and that he was into spiritualism/mysticism, but didn't know about the belief in fairies and the other things. Thanks for sharing this!!

Such a remarkable man, Sir Arthur Conan Doyle. I did not know any of this!

reply | flag *
message 28: by [deleted user] (new)
May 23, 2015 08:37AM
Interesting! Sir Arthur is also a possible suspect in perpetrating the Piltdown Man hoax. Seems less possible it was him now, after reading about his faery obsession. His last words to his wife, though...sigh. Lovely.

Oh I also forgot to mention that his interest in spiritualism came about like so many of his era when he lost his only son in the Great War. That is what led him to the other things like belief in fairies etc. I believe that spiritualism arose in the USA after their Civil War. So many people lost so many family members they were desperate to 'contact' them. Exactly the same thing happened after the Great War. Really very sad.

#10 - So touching! That is a true testament to a great relationship!

#4 - I never would have guessed that I had something in common with one of my earliest favorite authors! Especially this...

Thank you for the correction!

Thank you for the correction!"

not at all,it's just for your knowledge

I knew about his thing about mediums and spending money trying to prove fairies exist. It's sad. The two girls, who claimed they played with fairies, were clever fakes. Still he wanted to believe.

I knew all of these except #10. Conan Doyle was an interesting, complicated figure. His historical fiction is quite good, but is overshadowed by Sherlock Holmes. He's not the only author who grew to hate his creation - Agatha Christie grew to loathe Hercule Poirot (though not Miss Marple).

"Doyle and Peter Pan author J.M. Barrie were on the same cricket team.
The team was called the Allah-Akabarries, a combination of Barrie's name and an Arabic phrase meaning, "May the Lord help us." "

thombs up for this fact :D


(It mean "God is the greatest" though)

How did they get the name "Allahakbarries"?!

"Allahakbarries" was an amateur cricket team founded by author J. M. Barrie, and was active from 1890 to 1913. The team was named in the mistaken belief that Allah Akbar meant Heaven help us in Arabic (rather than God is the greatest)

One other note that the (Akabarries) is a combination of the last name of the author J.M.Barrie (Barrie's) as Barrie related the name of the team to himself.

That was a great read. Thanks, Goodreads! Sidenote: Does anyone else think he kind of looks like Gary Oldman in that picture?

I do a lesson with my students about the Cottingley Fairies to teach them bias and skepticism, so that one I was aware of, though I didn't know he had spent that much money. Love the info.

i know some of these facts from Kuroshitsuji manga. lol

He is really an interesting writer. But I love his Sherlock Holmes :)

حماس wrote: ""Allahakbarries" was an amateur cricket team founded by author J. M. Barrie, and was active from 1890 to 1913. The team was named in the mistaken belief that Allah Akbar meant Heaven help us in Ara..."

Yeah, but why did they use the arabic muslim words for their cricket team? Isn't it strange!

Nadin wrote: "حماس wrote: ""Allahakbarries" was an amateur cricket team founded by author J. M. Barrie, and was active from 1890 to 1913. The team was named in the mistaken belief that Allah Akbar meant Heaven h..."

At least one of them believed in fairies

Peter wrote: "Nadin wrote: "حماس wrote: ""Allahakbarries" was an amateur cricket team founded by author J. M. Barrie, and was active from 1890 to 1913. The team was named in the mistaken belief that Allah Akbar ..."

That's not the right answer, I believe.

Thanks, I enjoyed the info.