NaNoWriMo Advice: Scary First Sentences and Why they Don’t Really Matter (Yet)

Posted by Cybil on October 25, 2019
54 likes · 9 comments
Each November, aspiring novelists join the nonprofit organization National Novel Writing Month to kickstart their dreams of finishing a novel. The goal is roughly 1,667 words per day, 11,669 words per week, with the grand total of 50,000 words due by November 30.

We reached out to the team at NaNoWriMo—as it's known—for some extra tips. They've supplied this exclusive excerpt from their book, Brave the Page. 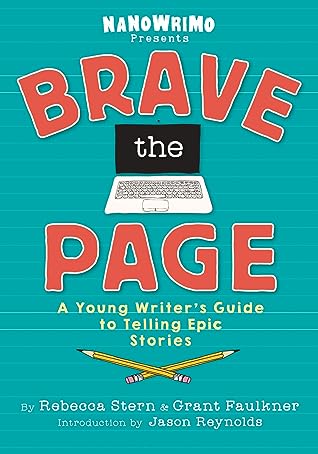 Error rating book. Refresh and try again.
Rate this book
Clear rating
1 of 5 stars2 of 5 stars3 of 5 stars4 of 5 stars5 of 5 stars
You can read all of the writing craft books in the world, you can bathe yourself in writing tips, but in the end, there’s only one way to become a better writer: sit down and write. Write often. Write thousands of words. And then write thousands more.

That’s one of the most important lessons of the rollicking writing boot camp that is National Novel Writing Month (aka NaNoWriMo), which challenges writers to write 50,000 words in 30 days. To write a 50,000-word novel in a month, you have to write 1,667 words a day. You have to banish your Inner Editor and show up and write, on good days and bad days, on days you’re just feeling lazy and uninspired, and maybe even on sick days.

It sounds simple, but given the arduous nature of writing, it’s actually difficult. Too many writers find themselves drifting aimlessly through their novels, living day after day with a vague promise to finish their novel someday. But someday doesn’t ever really come, does it? Someday is always off in the distance, beguiling you with its promises of more time, more money, more peace, more focus, more energy.

With NaNoWriMo’s “goal + deadline” approach, you learn how a novel is built not by the grand gusting winds of inspiration, but by the inglorious increments of constancy. Without a goal and a deadline, it’s easy to fool yourself about the progress you’re making. By focusing on the forward motion of your story, you’re constantly in pursuit of ideas, constantly experimenting with new ideas.

But to get to those experiments, you have to get over the obstacle that blocks many writers: that very first sentence. To help you get over that block so the rest of the novel can flow, here’s an excerpt from NaNoWriMo’s new writing guide, Brave the Page.

Your story who’s ready to be written!

It’s time to hurdle over that blank page into your story—which, for some, isn’t as easy as it sounds. We humans tend to be judgmental creatures, judging both what’s in front of us and what’s within us. Which is why getting that first sentence of a story down can be challenging. We want to lead with something gripping and amazing and profound. We want those first marks on the page to be beautiful and perfect, like our favorite books.

But guess what? Those first words don’t really matter right now. There will be time later to go back and change them. There will be time later to make those first words everything you want them to be. All of our favorite novels started out as imperfect and messy rough drafts that went through multiple revisions to reach their perfect, polished state.

All that matters right now is getting started.

Sounds good, right? But even if you’re not going for perfection, knowing how, exactly, to begin is a different story.

Here are a few ways to get your novel going.

1. The ‘There’s No Turning Back’ Moment

If you’re looking for a surefire way to get things rolling, start with the very moment your protagonist’s life changes forever (also known as the inciting incident). Beginning with the event that pushes your protagonist into action, and into their adventure or journey, is called starting in media res (Latin for “in the middle of things”). Beginning smack in the middle of action will hook your readers and pull them right into the story.

Take a look at the opening paragraph of Where Things Come Back by John Corey Whaley:

“I was seventeen years old when I saw my first dead body. It wasn’t my cousin Oslo’s. It was a woman who looked to have been around fifty or at least in her late forties. She didn’t have any visible bullet holes or scratches, cuts, or bruises, so I assumed that she had just died of some disease or something; her body barely hidden by the thin white sheet as it awaited its placement in the lockers. The second dead body I ever saw was my cousin Oslo’s. I recognized his dirty brown shoes immediately as the woman wearing the bright white coat grasped the metallic handle and yanked hard to slide the body out from the silvery wall."

Whaley could have started the novel with lots of information about the protagonist and cousin Oslo just to make sure we understood who the characters were, but that wouldn’t have been nearly as intriguing as starting here, in the action, with two dead bodies. This opening leaves us with lots of questions (How did Oslo die? Were the protagonist and Oslo close? How will the protagonist react to the death of his cousin?), making it hard not to read on!

To start with the inciting incident, have something happen to your protagonist that forces them to act. They could receive a mysterious letter, or get into a fight, or forget to wear pants to school. Whatever it is that happens, your protagonist won’t be able to go back to the way life was before. After the inciting incident, you can fill the reader in on all of the important details.

2. A Glimpse of the Setting or Environment

When the setting is so important to a story that it’s almost like its own character (which is the case in many science fiction and fantasy novels), opening with a glimpse of the landscape can help pull readers into the story’s world.

“In a hole in the ground there lived a hobbit. Not a nasty, dirty, wet hole, filled with the ends of worms and an oozy smell, nor yet a dry, bare, sandy hole with nothing in it to sit down on or to eat: it was a hobbit-hole, and that means comfort.”

Tolkien opens his book with a description of Bilbo Baggins’ hobbit-hole. In just two sentences, we learn quite a bit about hobbits: they live in the ground, in holes; have furniture; and appreciate comfort. We also learn that we’re heading into a world that’s unlike our own—Tolkien’s beginning pulls us right into a fantasy universe, in a fantasy story.

Using the setting or environment can be a fun and even powerful way to pull readers in. Beware, however, that if there’s too much description right in the very beginning, you risk losing your readers’ attention. If you’re going to begin this way, try to fit the description into a few lines or a paragraph.

Another way to start a story is by having your protagonist introduce themself. This gives you a chance to share some (important) information about the character before jumping into the action.

“I’m a senior at Cesar Chavez High in San Francisco’s sunny Mission district, and that makes me one of the most surveilled people in the world. My name is Marcus Yallow, but back when this story starts, I was going by w1n5t0n. Pronounced ‘Winston.’”

In this opening, Marcus is talking directly to us, the readers. He introduces himself not as a way to tell us every detail of his life, however, but as a way to bring us right to his story’s starting place: when he “was going by w1n5t0n.”

When you start with an introduction to the protagonist (or any character), reveal background information that will intrigue readers and is pertinent to your story’s starting point.

It’s time to write your first sentence—and keep writing to “The End.” Sign up for NaNoWriMo and write your novel with the gusting winds of inspiration from thousands of other writers.


Brave the Page is available available now. Be sure to add it to your Want to Read shelf.


Do you have advice for those trying NaNoWriMo this year? Please share your tips in the comments!

Is this book good to read

I'm a reader, not a writer. Writers have my utmost admiration. I marvel that they can create characters I really care about and stories that draw me in.
Along with my admiration, you have my gratitude. Keep on writing and I'll keep on reading.

Kate wrote: "I'm a reader, not a writer. Writers have my utmost admiration. I marvel that they can create characters I really care about and stories that draw me in.
Along with my admiration, you have my gratit..."

Can relate on a large level

Here is the (probably official?) GoodReads group I have set up for NaNoWriMo! 😍 This will be the third NaNoWriMo that the group will witness... LET'S GET WRITING! 😱💖 https://www.goodreads.com/group/show/...

Jessica wrote: "Here is the (probably official?) GoodReads group I have set up for NaNoWriMo! 😍 This will be the third NaNoWriMo that the group will witness... LET'S GET WRITING! 😱💖 https://www.goodreads.com/group..."

This would have been a good group for Featured Groups.

Excellent advice and wow time has flown by!

Nice article. Now the BUT.
I don't have either masses of experience (4 self-published books) or loads of success (some very encouraging ratings, thanks very much, few sales), but what often works for me - and I believe a host of successful real writers - is not starting at the beginning and knocking off every event in sequence.
I tend to write the crux moments, the exciting bits, the action, the drama, whatever gets me going on that particular day.
As the book coheres - and I usually do have an idea of where it's going, but like George R.R. Martin I write 'organically' so things do shift as it grows - I edit and fill in the bits that initially seemed less interesting: the walk from A to B, the talk to X, the nitty-gritty of plot point zeta-epsilon. By the time I get there those elements have become interesting because they now fill the flow.
It takes a long time, and a helluva lot of editing to make it all link together, but it gets done. Eventually.
So I would say for some people skipping over things is the best solution to the problem of inertia: progress is not always constant forwards motion.

Writing is one of the most important but hectic kinds of the profession at this time, there are lots of skills are much needed to a good and professional writer but it is not necessary that these skills are from by birth or it is God gifted, by your own efforts everything is possible like improving or increase the skills of writing. I have noticed when I started my plumber company in Dubai and when I tried to write my business content I really came to know all these things.