You're Like My Yo-Yo That Glowed in t... You're Setting Up Your Razor Wire Shrine

We Drove the Car to the Top of the Parking Ramp

On this eve of a holiday that makes me oddly uncomfortable--and that I will escape by fleeing into the woods for a couple of days to avoid fireworks and national anthems and celebrations of a country that doesn't feel all that free, though some of us are still doing our best to be brave--here's a review of a book that gets right down to what it means to be an American, at least for some of us:

Good Talk: A Memoir in Conversations by Mira Jacob


I crawled into bed last night around 11pm, thinking I'd read a few pages of Good Talk before I dozed off. The next thing I knew, it was 2am, and I had finished the book. I was a little bit teary-eyed and the dogs were finally back asleep after I'd woken them a handful of times by chuckling into the nighttime silence.

There was so much here that felt familiar, and that meant a great deal to me because I rarely see these experiences represented in books:


The strange, conflicting, unsolicited messages one gets as a writer of color. ("Ethnic sells." "Don't ghettoize yourself with ethnic writing." "God, if you can't get a job with the whole diversity thing, the rest of us are fucked.")


The excitement and near-wonder I felt in 2008, watching a multiracial presidential candidate talk candidly about race. ("We took bets on what would bring him down, which is what you do when you're trying to break your own heart before your country does it for you.")


The baffling, infuriating experience of being mistaken for "the help" and then having to explain to friends and family that you are not imagining that you've been mistaken for the help. ("Sometimes, you go along with it and pretend nothing happened. Sometimes, you hold your breath until the feeling of wanting to be believed passes. Sometimes, you weigh explaining against staying quiet and know they're both just different kinds of heavy.")


There was plenty here that was unfamiliar to my experience, too--particularly the expectations around marriage in some East Indian families, and the poignant, hilarious discussions that Mira and her son, Z, have about race. I appreciate those, too, for the windows they provide into conversations that I've never had to have.

I'd be remiss if I didn't mention the art, with its collage of drawings and photos. I loved how the photos situated me in particular places (in a way drawn backgrounds might not have). The way that Jacob cut out her figure drawings of the characters and overlaid these onto the background photos created a fitting tension--I was often aware that the characters were both part of the environment and separate from it, which is how I often feel as a person of color in the U.S.

Perhaps my favorite aspect of the book is how Jacob uses the graphic memoir form to illustrate what we do and don't say to one another. In the dialogue, asterisks often point to footnotes that reveal unspoken truths underlying what's said outright. Sometimes, whole panels depict the difference between what we say and what we think but don't share. My favorite page in the whole book enacts this, and I leave you with that page, harrowing and honest in what it reveals and conceals: 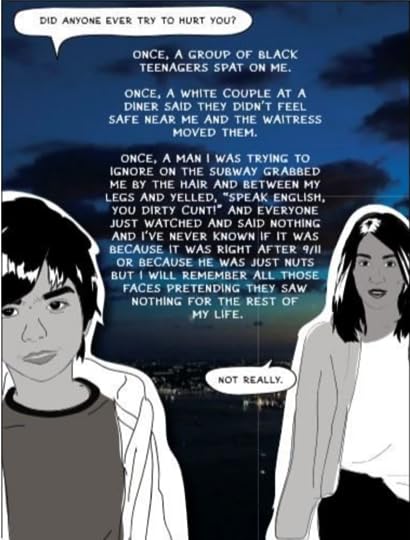