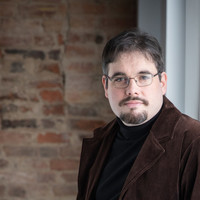 After a decade serving as a principal architect for Games Workshop’s Warhammer and Warhammer 40,000 properties, Matthew embarked on an adventure to tell stories set in worlds of his own design. He lives near Nottingham with his extremely patient wife – as well as a pride of attention-seeking cats – and writes to entertain anyone who feels there’s not enough magic in the world.

Quiz: Which Divine Creature are You?

You are born of godly purpose, but whose? And to what end? Take the quiz to find out, and embrace your destiny.

The post Quiz: Which Divine Creature are You? appeared first on The Tower of Stars.

More of Matthew's books…
Quotes by Matthew Ward  (?)
Quotes are added by the Goodreads community and are not verified by Goodreads. (Learn more)
“Weak men given licence are always more dangerous than the strong.”
― Matthew Ward, Legacy of Ash
1 likes
Like

“She stared across the muster field where the bulk of the 7th formed up alongside the ochre shields of Lord Strazna’s Knights Fellnore, and the ragtag array of banners and shields Lady Sarravin had assembled. What had begun as a sally looked more and more like Ahrad’s last hope . . . assuming she could bring order to the ranks. To depart the gate as a mob would only invite slaughter, and leave the citadel bereft”
― Matthew Ward, Legacy of Steel
0 likes
Like

“The mists parted. Two Hadari, armour too finely wrought for mere Immortals, galloped into view. One held the captured Fellnore pennant aloft. The other’s helm bore a stylised silver halo above, and a golden mask beneath”
― Matthew Ward, Legacy of Steel
0 likes
Like