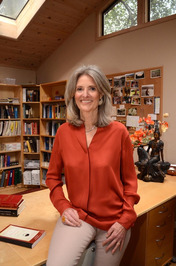 Katy Butler rated a book it was amazing
Look Me in the Eye: My Life with Asperger's
by John Elder Robison (Goodreads Author)
bookshelves: currently-reading

“When my father was vigorous and lucid, (my mother) regarded medicine as her wily ally in a lifelong campaign to keep old age, sickness, and death at bay. Now ally and foe exchanged masks. Medicine looked more like the enemy, and death the friend. (p. 184)”
― Katy Butler, Knocking on Heaven's Door: The Path to a Better Way of Death
tags: death-at-bay, lifelong-campaign, wily-ally
3 likes
Like

“When a fine old carpet is eaten by mice, the colors and patterns of what's left behind do not change,' wrote my neighbor and friend, the poet Jane Hirschfield, after she visited an old friend suffering from Alzheimer's disease in a nursing home. And so it was with my father. His mind did not melt evenly into undistinguishable lumps, like a dissolving sand castle. It was ravaged selectively, like Tintern Abbey, the Cistercian monastery in northern Wales suppressed in 1531 by King Henry VIII in his split with the Church of Rome. Tintern was turned over to a nobleman, its stained-glass windows smashed, its roof tiles taken up and relaid in village houses. Holy artifacts were sold to passing tourists. Religious statues turned up in nearby gardens. At least one interior wall was dismantled to build a pigsty.

I've seen photographs of the remains that inspired Wordsworth: a Gothic skeleton, soaring and roofless, in a green hilly landscape. Grass grows in the transept. The vanished roof lets in light. The delicate stone tracery of its slim, arched quatrefoil windows opens onto green pastures where black-and-white cows graze. Its shape is beautiful, formal, and mysterious. After he developed dementia, my father was no longer useful to anybody. But in the shelter of his broken walls, my mother learned to balance her checkbook, and my heart melted and opened. Never would I wish upon my father the misery of his final years. But he was sacred in his ruin, and I took from it the shards that still sustain me.”
― Katy Butler, Knocking on Heaven's Door: The Path to a Better Way of Death
tags: dementia, mind, misery, ruin, sacred, tintern-abbey
3 likes
Like

“To do more, is not necessarily to do better.”
― Katy Butler, Knocking on Heaven's Door: The Path to a Better Way of Death
tags: dying, inspirational, life
2 likes
Like