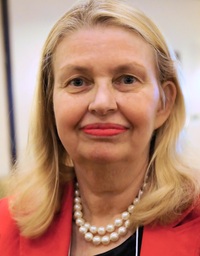 Born
in The United States
June 04, 1945
Website
http://www.susanjacoby.com/
Genre
Nonfiction, History, Secularism
edit data
Susan Jacoby is an independent scholar and best-selling author. The most recent of her seven previous books is The Age of American Unreason. She lives in New York City.

“This mindless tolerance, which places observable scientific facts, subject to proof, on the same level as unprovable supernatural fantasy, has played a major role in the resurgence of both anti-intellectualism and anti-rationalism.”
― Susan Jacoby, The Age of American Unreason
tags: anti-intellectualism, anti-rationalism, facts, fantasy, intelligence, science, tolerance
51 likes
Like

“The specific use of folks as an exclusionary and inclusionary signal, designed to make the speaker sound like one of the boys or girls, is symptomatic of a debasement of public speech inseparable from a more general erosion of American cultural standards. Casual, colloquial language also conveys an implicit denial of the seriousness of whatever issue is being debated: talking about folks going off to war is the equivalent of describing rape victims as girls (unless the victims are, in fact, little girls and not grown women). Look up any important presidential speech in the history of the United States before 1980, and you will find not one patronizing appeal to folks. Imagine: 'We here highly resolve that these folks shall not have died in vain; and that government of the folks, by the folks, for the folks, shall not perish from the earth.”
― Susan Jacoby, The Age of American Unreason
tags: anti-intellectualism
16 likes
Like

“If enough money is involved and enough people believe that two plus two equals five the media will report the story with a straight face always adding a qualifying paragraph noting that mathematicians however say that two plus two still equals four.”
― Susan Jacoby
15 likes
Like

Is this you? Let us know. If not, help out and invite Susan to Goodreads.