Discover new books on Goodreads
See if your friends have read any of T.D. Wilson's books 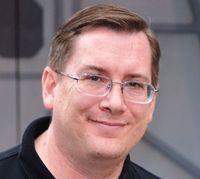 One of the best sci-fi series still going is The Expanse.  The first three seasons were produced and aired on Syfy (yes, I still like the original name Sci Fi Channel. but change is inevitable).  After season 3, Syfy decided to drop the series.  Syfy did have an online partner in Amazon, which aired the seasons after a few months of their release on Syfy.  Well, Amazon decided to pick up the show Read more of this blog post »
View more on T.D. Wilson's website »
Like  •  0 comments  •  flag

The Epherium Chronicles: Embrace (Science Fiction & Fantasy)
1 chapters   —   updated May 13, 2015 06:34PM
Description: Book one of The Epherium Chronicles. It was a bizarre twist of fate that turned James Hood into the Hero of Pluto Station. Now, nearly 20 years after that famous battle against the hostile alien race known at the Cilik'ti, Hood is called on again for a dangerous mission. This time he must take a new ship, the Armstrong, into deep space to make contact with fledgling colonies, created from ships developed by the Epherium Corporation that were launched before the war with the Cilik'ti began. As their journey begins, Hood and his crew discover more information about the colonies and their corporate benefactors. What they uncover could be more dangerous to humanity than a new conflict with their formidable foe.

THE Group for Authors! — 11787 members — last activity 8 hours, 5 min ago
This is a group for authors to discuss their craft, as well as publishing and book marketing.

Michele Mannon
author of
Knock Out

Katherine McIntyre
author of
An Airshi...

Anna Erishkigal
author of
The Chose...