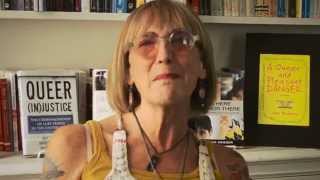 Kate Bornstein isn't a Goodreads Author (yet), but they do have a blog, so here are some recent posts imported from their feed.

Come Up to the Lab: My Gender Workshop

Ever since Time Magazine proclaimed a ���Transgender Tipping Point��� a year and a half ago, I���ve been exploring trans identities and expressions that aren���t included in mainstream acceptance���because as a nonbinary trans person, I have yet to occupy any mainstream tipping point. So I���m researching this for a new book I���m working on: ���Trans! Just for the Fun of It!��� and that makes thi

“Gender is not sane. It's not sane to call a rainbow black and white.”
― Kate Bornstein
tags: gender, rainbow, sanity
56 likes
Like

“It's easy to fictionalize an issue when you're not aware of the many ways in which you are privileged by it.”
― Kate Bornstein, Gender Outlaws: The Next Generation
tags: gender, gender-identity, privilege, transgender
38 likes
Like

“The first question we usually ask new parents is: “Is it a boy or a girl?”.
There is a great answer to that one going around: “We don’t know; it hasn’t told us yet.” Personally, I think no question containing “either/or” deserves a serious answer, and that includes the question of gender.”
― Kate Bornstein, Gender Outlaw: On Men, Women and the Rest of Us
tags: gender
38 likes
Like

Is this you? Let us know. If not, help out and invite Kate to Goodreads.