Discover new books on Goodreads
See if your friends have read any of Amy S. Foster's books 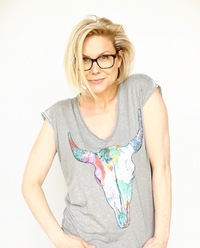 Okay, so, Imagine you write this YA novel. This novel is intended for kids 15 and up. You write this novel because you love YA but, it often frustrates you. You have teenagers in your home all day long but often, dialogue in YA doesn't sound at all like how the teens you know talk. So, you write a book with this, with them, in mind.

Amy Foster is currently reading
The Madwoman in the Volvo: My Year of Raging Hormones
by Sandra Tsing Loh
bookshelves: currently-reading

“But there are as many different kinds of love as there are people in the world.”
― Amy S. Foster, When Autumn Leaves
7 likes
Like

“No one could deny that his face matched the sexy timbre of his voice; he was strikingly beautiful, with shaggy black hair and piercing eyes. A little bit of his mouth always remained open, even when his lips were closed in a tiny, perfect diamond shape.
He was two men: there was the one she saw in interviews- goofy, self-effacing, and gifted with the ability to make fun of himself and his profession, which put everyone at ease- and then there was the other Callum, the one on stage. Magnetic, dark, guarded, as if he was holding something back, as if it would simply be too much to give his purest and most authentic self to the audience.”
― Amy S. Foster, When Autumn Leaves
tags: callum-west, crush, sylvie-shigeru
2 likes
Like

“When she was younger, Ellie used to believe that her invisibility was a metaphor for something else, assuming it was her awkwardness, her fear of saying or doing the wrong thing. She had thought as she grew older, more confident, wiser, she would outgrow this not being noticed. But lately, Ellie really felt like a ghost. She would be in a place, but not really there. People looked through her, past her. Her invisibility had taken on a life of its own. It wasn't a metaphor anymore, or a defense mechanism or eccentric little tic. She was actually invisible. At least, that was how it felt to her.
Ellie wondered whether her parents were to blame. They were, after all, children of the sixties who had met at a love-in or lie-down or something of that sort, about which Ellie knew little except that a lot of drugs had been involved. Could Ellie's lack of physical presence be a genetic mutation caused by acid or mushrooms? Ellie grew up on their hippie commune among the highest, densest redwoods, where they dug their hands deep into the soil and grew their own food, made their own clothes. So perhaps it is there that the mystery is solved. Ellie indeed was a child of the earth, a baby of beiges and taupes and browns and muted greens. Nature doesn't scream and shout, demanding constant attention, and neither did Ellie. Maybe her invisibility was just her blending right in.”
― Amy S. Foster, When Autumn Leaves
tags: child-of-nature, earthy, ellie-penhaligan, invisibility
1 likes
Like

Michele wrote: "Since the moment I finished When Autumn Leaves I have been looking for books like it with little success. I come from a family of strong women drenched in intuition and "knowledge" though we are ea..."
I definitely recommend Alice Hoffman for you, her books such as The Third Angel, Story Sisters, a YA genre book called Green Heart followed by Green Angel.... and of course....Practical Magic.

Since the moment I finished When Autumn Leaves I have been looking for books like it with little success. I come from a family of strong women drenched in intuition and "knowledge" though we are east coast vs west coast. When Autumn Leaves touched that familiar place in my woman's heart.

Does anyone have any suggestions? 2 authors I have found are Sarah Addison Allen and some of Alice Hoffman's works but Ms. Foster is still #1

Hi Amy, thanks so much for accepting my friend request! Have a wonderful day!

Thanks for accepting my friendship. I look forward to getting to know your work, and also invite you to take a look at mine.

Hi Amy, I'm pleased to meet you and look forward to discussing books with you. If you ever have any questions about any of the titles on my shelves or about eHarlequin and all it has to offer, please ask. I'll be happy to answer. I’ll also update news when I can for example; did you know that in March Silhouette Desires have released their 2000th book? The authors are celebrating with a special blog on eHarlequin.com :).

Thanks Debbie! I hope you enjoy it!

Just picked up When Autumn Leaves, Amy. I can't wait to begin reading it this weekend!!

Thanks Michelle it is all those things, I hope you read it!"

Thanks Michelle it is all those things, I hope you read it!

Thank you for your friendship. "When Autumn Leaves" an evocative, magical title ! Nice Cover Art Book...

Thanks for inviting me to your GR friendship circle, Amy! Hope you have a fab weekend! :-D

Thank you for the friendship add

Thanks for the friends invite.