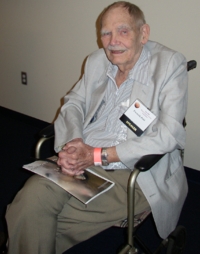 Born
in New York City, The United States
November 26, 1919
Died
September 02, 2013
Website
http://www.frederikpohl.com/
Genre
Science Fiction & Fantasy
edit data
Frederik George Pohl, Jr. was an American science fiction writer, editor and fan, with a career spanning over seventy years. From about 1959 until 1969, Pohl edited Galaxy magazine and its sister magazine IF winning the Hugo for IF three years in a row. His writing also won him three Hugos and multiple Nebula Awards. He became a Nebula Grand Master in 1993.

Frederik Pohl isn't a Goodreads Author (yet), but they do have a blog, so here are some recent posts imported from their feed.

Betty’s Advice to the Lovelorn

By Elizabeth Anne Hull Nearly a year before Fred died, I wrote to a young friend who had recently become engaged in a same-sex relationship. It was in response to finding out (for the first time; I previously had no idea) that my friend was a lesbian. She told me of the difficulties she […]
View more on Frederik Pohl's website »
Like  •  0 comments  •  flag

3.56 avg rating — 1,151 ratings
More series by Frederik Pohl…
Quotes by Frederik Pohl  (?)
Quotes are added by the Goodreads community and are not verified by Goodreads. (Learn more)
“A good science fiction story should be able to predict not the automobile but the traffic jam.”
― Frederik Pohl
tags: sci-fi, science-fiction, writing
140 likes
Like

“They were two lovely choices. One of them meant giving up every chance of a decent life forever...and the other one scared me out of my mind.”
― Frederik Pohl, Gateway
tags: choice, dare, risk
62 likes
Like