Discover new books on Goodreads
See if your friends have read any of Walter C. Kaiser Jr.'s books 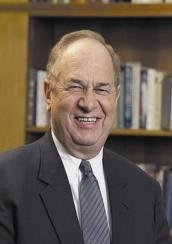 Born
in Folcroft, Pennsylvania, The United States
April 11, 1933
Website
http://www.walterckaiserjr.com/
edit data
Walter C. Kaiser Jr. (PhD, Brandeis University) is president emeritus of Gordon-Conwell Theological Seminary in South Hamilton, Massachusetts. He previously taught at Trinity Evangelical Divinity School and at Wheaton College. Kaiser is active as a preacher, speaker, researcher, and writer and is the author of more than forty books, including Preaching and Teaching from the Old Testament and The Majesty of God in the Old Testament.

“It was ever and always the plain offer of God to all the peoples of the earth through his elected servants of the promise-plan.”
― Walter C. Kaiser Jr., Mission in the Old Testament: Israel as a Light to the Nations
5 likes
Like

“Up until the 1950s the subject of the missionary movement was referred to as "missions" in the plural form. In fact, the term "missions" was first used in its current context by the Jesuits in the sixteenth century. But the International Missionary Council discussions in the 1950s on the missio- Dei convinced most that the mission of the Triune God was prior to any of the number of missions by Christians during the two millennia of church history. Consequently, since there was only one mission, the plural form has dropped out of familir usage and the singular form, "mission," has replaced it for the most part. Nevertheless, most churches and lay-persons hang on the plural missions. For that reason, and to make our point clear here, we will refer to it in this work from time to time while alerting believers to the coming change.”
― Walter C. Kaiser Jr., Mission in the Old Testament: Israel as a Light to the Nations
tags: mission
1 likes
Like

“Torah is not merely a collection of prohibitions, rigid strictures and boring observances. Rather, it is a narrative of the blessings and promises of God initially offered to one person and family, but through which the whole world will ultimately be blessed.”
― Walter C. Kaiser Jr.
tags: bible, faith, kaiser, moses, old-testament, torah
1 likes
Like


Is this you? Let us know. If not, help out and invite Walter to Goodreads.