,
Discover new books on Goodreads
See if your friends have read any of George Gamow's books 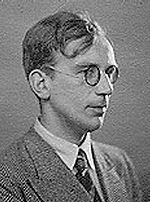 4.19 avg rating — 1,037 ratings
Quotes by George Gamow  (?)
Quotes are added by the Goodreads community and are not verified by Goodreads. (Learn more)
“It took less than an hour to make the atoms, a few hundred million years to make the stars and planets, but five billion years to make man!”
― George Gamow, The Creation of the Universe
tags: atoms, cosmology, creation, humor, physics, science, stars
24 likes
Like

“Much later, when I discussed the problem with Einstein, he remarked that the introduction of the cosmological term was the biggest blunder he ever made in his life. But this 'blunder,' rejected by Einstein, is still sometimes used by cosmologists even today, and the cosmological constant denoted by the Greek letter Λ rears its ugly head again and again and again.”
― George Gamow
tags: albert-einstein, blunder, cosmological-constant, einstein, greek, physics, problem, science
8 likes
Like

“Since the atoms are indestructible, the disintegration of human body after death should be actually considered as the dispersion of the separate filaments (except probably those forming the bones) in all different directions.”
― George Gamow, One, Two, Three...Infinity: Facts and Speculations of Science
6 likes
Like