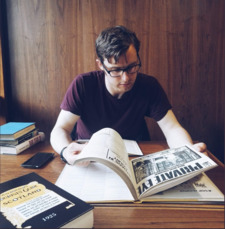 This will prevent Will from sending you messages, friend request or from viewing your profile. They will not be notified. Comments on discussion boards from them will be hidden by default.
Sign in to Goodreads to learn more about Will.

Will is Currently Reading

Will is currently reading
Conversations with Wilder
by Cameron Crowe
bookshelves: currently-reading

Will is currently reading
Nixonland: The Rise of a President and the Fracturing of America
by Rick Perlstein
bookshelves: currently-reading

“Dixon was alive again. Consciousness was upon him before he could get out of the way; not for him the slow, gracious wandering from the halls of sleep, but a summary, forcible ejection. He lay sprawled, too wicked to move, spewed up like a broken spider-crab on the tarry shingle of morning. The light did him harm, but not as much as looking at things did; he resolved, having done it once, never to move his eyeballs again. A dusty thudding in his head made the scene before him beat like a pulse. His mouth had been used as a latrine by some small creature of the night, and then as its mausoleum. During the night, too, he'd somehow been on a cross-country run and then been expertly beaten up by secret police. He felt bad.”
― Kingsley Amis, Lucky Jim
tags: alcohol, hangover, humor, literature
74 likes

“Don’t you love the Oxford Dictionary? When I first read it, I thought it was a really really long poem about everything.”
― David Bowie
226 likes

“So we beat on, boats against the current, borne back ceaselessly into the past.”
― F. Scott Fitzgerald, The Great Gatsby
tags: book, inspirational
11704 likes

“On both sides of the highway I could see the rows of little frame houses, all alike, as if there were only one architect in the city and he had a magnificent obsession.”
― Ross Macdonald
tags: architecture, city
3 likes

The Feminist Orchestra Bookclub — 4940 members — last activity Mar 08, 2021 08:43AM
Discover and recommend more feminist reads here: https://www.goodreads.com/list/show/96419.The_Feminist_Orchestra_Potential_Reading_List We're also o Discover and recommend more feminist reads here: https://www.goodreads.com/list/show/96419.The_Feminist_Orchestra_Potential_Reading_List We're also on twitter: https://twitter.com/femorchestra #feministorchestra Sick of sexist comments from people online and being accused of banging my 'feminist drum' by intolerant people I have decided to start a Feminist Bookclub on Booktube. All engagement is welcome though, on youtube, on blogs and on goodreads. This is not 'my' bookclub, however, it belongs to all of us. I strongly believe feminism, which means equality of all sexes in society, not to be about the individual but about everyone and to be a group movement. Therefore, I want this bookclub to be a group. We read one book over the course of two months throughout the year. At the end of the first month there will be a pre-scheduled twitter chat on themes relating to that month's book, which will not require you to have finished the book. A video review will then be posted on Jean (bookishthoughts) or Lauren's (readsanddaydreams) channel on youtube. If you also film a youtube review/discussion or write a review/discussion of the book on your blog please share it with us all by posting it in the reviews thread. Please use #feministorchestra on twitter, instagram and elsewhere so we can all share our posts, thoughts, discussion and book reviews Gender equality is at the heart of this book club so please recognise this in your behaviour. We do not exist to convince anyone of this but to discuss the nuances and individual issues presented by the literature we read. All fantastic name credit goes to Chelsea: https://www.youtube.com/channel/UCr5ozf3OVhcWVbr_f7ONJpw ...more

People Will is Following

3 people are following Will

Graham Greene
author of: The End of the Affair

Polls voted on by Will

Lists liked by Will