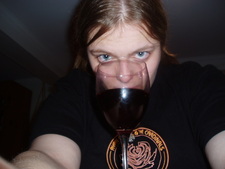 This will prevent Nancy from sending you messages, friend request or from viewing your profile. They will not be notified. Comments on discussion boards from them will be hidden by default.
Sign in to Goodreads to learn more about Nancy.

Nancy is currently reading
The Warmth of Other Suns: The Epic Story of America's Great Migration
by Isabel Wilkerson (Goodreads Author)
bookshelves: currently-reading

“There were moments bristling with deadness, when she looked out at her life and went, "What?" Or worse, feeling interrupted and tired, "Wha—?”
― Lorrie Moore, Birds of America: Stories
tags: birds-of-america
30 likes

“When you wake up in the morning, Pooh," said Piglet at last, "what's the first thing you say to yourself?"

"What's for breakfast?" said Pooh. "What do you say, Piglet?"

“It is more fun to talk with someone who doesn't use long, difficult words but rather short, easy words like "What about lunch?”
― A. A. Milne, Winnie-the-Pooh
tags: friendship
5149 likes

“It's turning out to be a bad day, a day when the sun feels like teeth.”
― Jennifer Egan, A Visit from the Goon Squad
14 likes

Polls voted on by Nancy