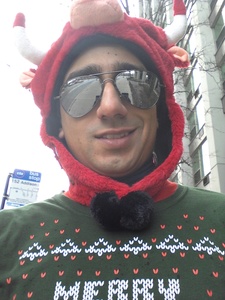 This will prevent Aly from sending you messages, friend request or from viewing your profile. They will not be notified. Comments on discussion boards from them will be hidden by default.
Sign in to Goodreads to learn more about Aly.

Aly is currently reading
Yes, And: How Improvisation Reverses "No, But" Thinking and Improves Creativity and Collaboration--Lessons from The Second City
by Kelly Leonard
bookshelves: currently-reading, 2020, improv

See all 15 books that Aly is reading…

“I hate when people ask what a book is about. People who read for plot, people who suck out the story like the cream filling in an Oreo, should stick to comic strips and soap operas. . . . Every book worth a damn is about emotions and love and death and pain. It's about words. It's about a man dealing with life. Okay?”
― J.R. Moehringer
tags: books, emotion, plot
176 likes

“In my own professional work I have touched on a variety of different fields. I’ve done work in mathematical linguistics, for example, without any professional credentials in mathematics; in this subject I am completely self-taught, and not very well taught. But I’ve often been invited by universities to speak on mathematical linguistics at mathematics seminars and colloquia. No one has ever asked me whether I have the appropriate credentials to speak on these subjects; the mathematicians couldn’t care less. What they want to know is what I have to say. No one has ever objected to my right to speak, asking whether I have a doctor’s degree in mathematics, or whether I have taken advanced courses in the subject. That would never have entered their minds. They want to know whether I am right or wrong, whether the subject is interesting or not, whether better approaches are possible… the discussion dealt with the subject, not with my right to discuss it.
But on the other hand, in discussion or debate concerning social issues or American foreign policy…. The issue is constantly raised, often with considerable venom. I’ve repeatedly been challenged on grounds of credentials, or asked, what special training do I have that entitles you to speak on these matters. The assumption is that people like me, who are outsiders from a professional viewpoint, are not entitled to speak on such things.
Compare mathematics and the political sciences… it’s quite striking. In mathematics, in physics, people are concerned with what you say, not with your certification. But in order to speak about social reality, you must have the proper credentials, particularly if you depart from the accepted framework of thinking. Generally speaking, it seems fair to say that the richer the intellectual substance of a field, the less there is a concern for credentials, and the greater is the concern for content.”
― Noam Chomsky

“I must not fear. Fear is the mind-killer. Fear is the little-death that brings total obliteration. I will face my fear. I will permit it to pass over me and through me. And when it has gone past I will turn the inner eye to see its path. Where the fear has gone there will be nothing. Only I will remain.”
― Frank Herbert, Dune
tags: bene-gesserit, fear, litany-against-fear, motivational, scifi
10863 likes

“On the theft of his material by Denis Leary: "I have a scoop for you. I stole his act. I camouflaged it with punchlines, and to really throw people off, I did it before he did.”
― Bill Hicks
tags: stand-up-comedy
58 likes

J.R. Moehringer
author of: The Tender Bar: A Memoir
More…

Polls voted on by Aly