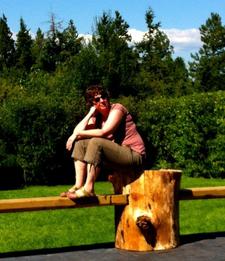 This will prevent Patty from sending you messages, friend request or from viewing your profile. They will not be notified. Comments on discussion boards from them will be hidden by default.
Sign in to Goodreads to learn more about Patty.

Patty is currently reading
What Light Can Do: Essays on Art, Imagination, and the Natural World
by Robert Hass
bookshelves: currently-reading

“It is easier to tell a story of how people wound one another than of what binds them together.”
― Anne Carson, Plainwater: Essays and Poetry
137 likes

“Instances of delightfulness are always intrinsically beautiful, so to speak, and yet under the right circumstances they may be swinish as well, for what is humanly beautiful might, as it were, be too beautiful for human beings, for which reason people are glad to place beauty in proximity to pigpens, as one is no doubt justified in saying.”
― Robert Walser, Microscripts
4 likes

“…the people who dwell in the land of dimness, the people who could not see themselves except as formless shadows moving in a mist, the people who had gouged out their own eyes to keep from looking at themselves in the mirror, these people, these glorious people were none other than ourselves: The Americans.”
― Henry Dumas, Jonoah and the Green Stone
6 likes

“As for the public, the PR man, like the advertising expert and others who deal with people in the lump, including a number of would-be-statesmen and redeemers-at-large, conceive of that body as composed of non-ideographic units which are to be regarded not as ourselves but as, ultimately, gadgets of electrochemical circuitry operated by a push-button system of remote control. In fact, in dealing with the public in a purely technological society, the very notion of self is bypassed by various appeals to an undifferentiated unconscious, such appeals often having little or no relation to the vendible object or idea; in this connection history gives us to contemplate the fact that the psychologist J.B. Watson, the founder of American behaviorism, wound up in the advertising business. So history may become parable.”
― Robert Penn Warren, Democracy and Poetry
tags: 1974
3 likes

Polls voted on by Patty