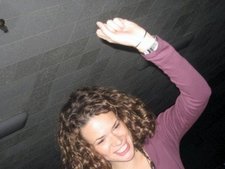 This will prevent amelia from sending you messages, friend request or from viewing your profile. They will not be notified. Comments on discussion boards from them will be hidden by default.
Sign in to Goodreads to learn more about amelia.

See all 9 books that amelia is reading…

“As recently as fifty years ago my grandmother was picking cotton with bleeding fingers. I think about her all the time while I'm getting overpaid to sit at a computer, eat Chinese takeout, and think up things in my pajamas, The half century separating my fingers, which are moisturized with cucumber lotion and type eighty words per minute, and her bloody digits is an ordinary Land of Opportunity parable, and don't think I don't appreciate it. ”
― Sarah Vowell, The Partly Cloudy Patriot
32 likes

“I talk about going to [George W. Bush's] Inauguration and crying
when he took the oath, 'cause I was so afraid he was going to
wreck the economy and muck up the drinking water'... the failure of
my pessimistic imagination at that moment boggles my mind now.”
― Sarah Vowell
86 likes

“However, displayed right alongside all the Confederate flag paraphernalia is a bunch of American flag merch – American flag place mats, patriotic “body crystals,” flag stickers you attach to your skin. Personally, I’m small-minded and literal enough that I see the two symbols as contradictory, especially in a time of war. But I fear that the consumer who buys a Confederate flag coffee cup, which she will then put on her American flag place mat, is the sort of sophisticated thinker who is open-minded enough that she is capable of hating blacks and Arabs at the same time.”
― Sarah Vowell, Assassination Vacation
tags: humor
21 likes

“You know you've reached a new plateau of group mediocrity when even a Canadian is alarmed by your lack of individuality.”
― Sarah Vowell, Assassination Vacation
tags: canadians, humour, mediocrity, oneida-cult
45 likes

“I'm always disappointed when I see the word "Puritan" tossed around as shorthand for a bunch of generic, boring, stupid, judgmental killjoys. Because to me, they are very specific, fascinating, sometimes brilliant, judgmental killjoys who rarely agreed on anything except that Catholics are going to hell.”
― Sarah Vowell, The Wordy Shipmates
tags: 2008, pilgrims, puritans, roman-catholicism
53 likes

Polls voted on by amelia