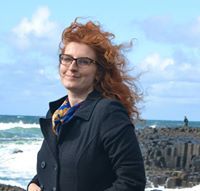 This will prevent Katie from sending you messages, friend request or from viewing your profile. They will not be notified. Comments on discussion boards from them will be hidden by default.
Sign in to Goodreads to learn more about Katie.

Katie is currently reading
The Only Girl in the World
by Maude Julien
bookshelves: currently-reading

Shaping up to be an intense read. The language is very clean and direct, which is good for a translation, and very impactful for a memoir."

Katie is currently reading
The Cost of Living: A Working Autobiography
by Deborah Levy
bookshelves: currently-reading

See all 9 books that Katie is reading…

“The only reason you say that race was not an issue is because you wish it was not. We all wish it was not. But it’s a lie. I came from a country where race was not an issue; I did not think of myself as black and I only became black when I came to America. When you are black in America and you fall in love with a white person, race doesn’t matter when you’re alone together because it’s just you and your love. But the minute you step outside, race matters. But we don’t talk about it. We don’t even tell our white partners the small things that piss us off and the things we wish they understood better, because we’re worried they will say we’re overreacting, or we’re being too sensitive. And we don’t want them to say, Look how far we’ve come, just forty years ago it would have been illegal for us to even be a couple blah blah blah, because you know what we’re thinking when they say that? We’re thinking why the fuck should it ever have been illegal anyway? But we don’t say any of this stuff. We let it pile up inside our heads and when we come to nice liberal dinners like this, we say that race doesn’t matter because that’s what we’re supposed to say, to keep our nice liberal friends comfortable. It’s true. I speak from experience.”
― Chimamanda Ngozi Adichie, Americanah
1210 likes

Polls voted on by Katie