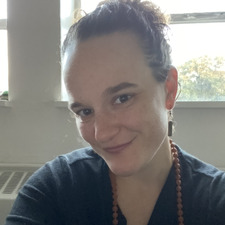 This will prevent Meg from sending you messages, friend request or from viewing your profile. They will not be notified. Comments on discussion boards from them will be hidden by default.
Sign in to Goodreads to learn more about Meg.

“Fiction is one of the few experiences where loneliness can be both confronted and relieved. Drugs, movies where stuff blows up, loud parties -- all these chase away loneliness by making me forget my name's Dave and I live in a one-by-one box of bone no other party can penetrate or know. Fiction, poetry, music, really deep serious sex, and, in various ways, religion -- these are the places (for me) where loneliness is countenanced, stared down, transfigured, treated.”
― David Foster Wallace
tags: fiction, loneliness, on-fiction
1343 likes

“And, when you want something, all the universe conspires in helping you to achieve it.”
― Paulo Coelho, The Alchemist
tags: inspirational
19342 likes

“But the young educated adults of the 90s -- who were, of course, the children of the same impassioned infidelities and divorces Mr. Updike wrote about so
beautifully -- got to watch all this brave new individualism and self-expression and sexual freedom deteriorate into the joyless and anomic self-indulgence of the Me Generation. Today's sub-40s have different horrors, prominent among which are anomie and solipsism and a peculiarly American loneliness: the prospect of dying without once having loved something more than yourself.”
― David Foster Wallace, Consider the Lobster and Other Essays
tags: john-updike, norman-mailer, philip-roth, solipsism
108 likes

“The paradox of education is precisely this - that as one begins to become conscious one begins to examine the society in which he is being educated. ”
― James Baldwin
633 likes

“We are not ‘censored’ in the traditional way in the United States: writers are not beaten or killed because of their words, and no Ministry of Truth enforces an official version of what can be printed and thought. But in this culture of images, we are censoring ourselves. That may be more insidious and long-lasting. What I mean is that we disparage long-term complexity, and extol superficiality. We ignore reading, and lavish time on images. To read, in my mind, is to consider and to think. To see an image is to react. What happens when we start believing the world and what is important in it are only these reactions and prejudices? What have you become when the most expected of you is simply to press a ‘Like’ button? What kind of gulag is it when its inhabitants are too stupid to understand they are its prisoners?”
― Sergio Troncoso
tags: american-culture, censorship, chico-lingo-blog, reading, reading-quotes, sergio-troncoso, superficial-culture
2 likes

Polls voted on by Meg