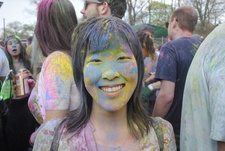 Laura is currently reading
It's Not Your Money: How to Live Fully from Divine Abundance
by Tosha Silver
bookshelves: currently-reading

Laura is currently reading
Singing to the Plants: A Guide to Mestizo Shamanism in the Upper Amazon
by Stephan V. Beyer
bookshelves: currently-reading

Laura is currently reading
The Kabbalah Handbook: A Concise Encyclopedia of Terms and Concepts in Jewish Mysticism
by Gabriella Samuel
bookshelves: currently-reading

“To speak ill of others is a dishonest way of praising ourselves. . . let us be above such transparent egotism.”
― Will Durant
192 likes

“He stood naked at the edge of a cliff. THe lake lay far below him. A frozen explosion of granite burst in flight to the sky over motionless water. The water seemed immovable, the stone- flowing. The stone had the stillness of one last movement when thrust meets thrust and the currents are held in a pause more dynamic than motion. THe stone glowed wet with sunrays. The lake below was only a thin steel ring that cut the rocks in half. The rocks went on into the depth, unchanged. They began and ended in the sky so that the world seemed suspended in space, an island floating on on nothing, anchored to the feet of the man on the cliff.
His body leaned back against the sky. It was a body of long straight lines and angles each curve broken into planes. He stood rigid his hands hanging at his sides, palms out. He felt his shoulder blades drawn tight together. The curve of his neck, and the weight of the blood in his hands. He felt the wind behind him in the hollow of his spine. The wind waved his hair against the sky. His hair was neither blonde nor red, but the exact color or ripe orange rind... He stepped to the edge, raised his arms, and dived down into the sky below.”
― Ayn Rand, The Fountainhead
14 likes

“It is the mark of an educated mind to be able to entertain a thought without accepting it.”
― Aristotle, Metaphysics
tags: wisdom
8719 likes

Literary Prizes — 266 members — last activity Jul 08, 2012 07:00AM
A place to discuss the Booker, the Pulitzer, the Nobel Prize for Literature, the Newbery, and/or any other literary awards.