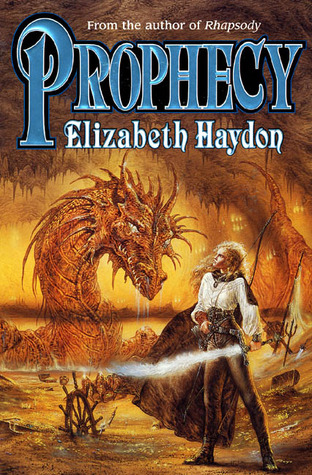 In Rhapsody, a fellowship was forged--three companions who, through great adversity, became a force to be reckoned with: Rhapsody, a singer of great talent and even greater beauty; Achmed, an assassin with unearthly talents; and Grunthor, a giant Sergeant-Major whose jolly disposition stands at odds with his deadly skill at weapons. Having fled the F'dor--an ancient, powerful evil--the three emerged on the other side of the world, only to discover fourteen centuries had passed. Their homeland had been destroyed, their people scattered across several continents, and everyone they ever knew had long since passed away...except, perhaps, the F'dor.

Prophecy continues this powerful epic. Driven by a prophetic vision, Rhapsody races to rescue the religious leader of her new homeland while Achmed and Grunthor seek evidence of the F'dor. These three may be their world's only hope, the heroes spoken of in the Prophecy of the Three, but their time is running short. They must find their elusive enemy before his darkness consumes them all.

We moved the start date of this book to March 22nd as there are several series that most of us are following with brand-new additions coming out this month.

Had to start a new thread for this, as once a book is "attached" to the title, it won't let me change it.

Is the start date confirmed?

nah! just not doing any buddy reads at the mo. How are ya?

Sorry, Vi. Can we move it back a few days? We are behind on

and my ex (whom I was still good friends with) passed away last week. His Memorial Service/Funeral is Friday and I’ll have company from out of town.

Oh! Sorry to hear that. My condolences, Lisa Kay. Sure, no problem. Take your time. Let me know when you're good to start.

i'm awrite. hows life and the wedding planning? crazy, yet?

I'm buffered from the crazy here in Singapore. But moving back to India on April 2nd. The crazy is starting the very same day! Jewelry shopping! *shudders*

hehehe i'll just point at you and laugh!

When's the date of the big event, Vi?

oh and you know it won't just end there, don't ya? as the new bride, you'll be attending many functions hehehe

You EVIL people. Your turn WILL come and *I* will then point and laugh. I haven't even started on my wedding and other function saree shopping. Apparently, we're to do that with my in-laws. Predicting a sticky situation there..

Lisa Kay, the big day is on June 8 but the pre-marriage stuffs will start on 6th itself - primarily the (fun) mehendi (henna) and with the post-marriage functions ending on 9th June. Afterwards, I'm not sure what exactly will happen. Depends on my in-laws.

My best friend for life attended an Indian wedding and had the mehendi done; it was absolutely beautiful.

oooh how weird'd that be? shopping with the in-laws. We do that here too.

it is,LK! plus there'd be subtle differences between how Vi'd do it in India and how we do it here in Pakistan.

I love mehendi. We have two different ways - One from the cone which is basically powdered henna leaves that you usually see. The other is from making a paste of the henna leaves and applying on the hands and legs. It won't be as gorgeous as the cone nor as extensive; it's pretty simple. We do the latter often. It can stay on for more than a month unlike the cone mehendi. TMI, I guess.

Not TMI. Love to learn about it. ☺ Thanks.

I know! Planning to get some friend/cousin to come with me for relief. So not looking forward to it.

Midu wrote: "oooh how weird'd that be? shopping with the in-laws. We do that here too."

You guys don't do the cone mehendi? Then what do you use?

me too! i'm all girly when it comes to mehndi and chooriyaan (bangles)

no, i meant the mehndi style. the arabic style was quite popular here a few years back.

Me too! I love picking out and mix n matching the bangle sets.

For the bride and the groom, it's traditional style all the way. But I guess the guests go either way but mostly arabic. Arabic looks so pretty but the traditional looks so much richer. But that's personal preference.

true! i love the smell too!

next week would be great for me to start this too.

I posted the chapters breakdown above. Does it look alright? It is approximately 70 pages a day, but tiny print.

Okay, I've started reading, but I'm only about 1/2 way through today's reading. Anyone joining me on this one?

I am, but I'm running behind. I've just started Rhapsody a couple of days and trying like crazy to finish it before EOM.

Crap! I didn't check the thread (and I didn't get any notification too :() I'll start this book today if I can.

Don't worry about it, Vi. The e-mails are messed up again. It won't even let me add a new book as a librarian b/c it says my e-mail is NOT valid. **sigh** I notified the Feedback group.

I'm flying back to India on Monday and doing some dreaded shopping which means I won't be participating on Monday or Tuesday. I'll catch up on Wednesday though. (All of them my time!) Sorry guys!

Okay, what day is it there for you, Vi?

Okay, thanks, Vi! Hope your shopping (for the wedding?) is a success. ☺

Yes, it's for the wedding. I hope so too and in a short possible time too. :)

I splurged! **gasp** I got a brand new Kindle Fire! Now I don't want to read my paperback of this one, LOL! I want to play with my new toy.

I've been jealous of you having a Kindle, Caro. I've just been reading off the the computer. I figure this will save me money in the long run as I will read more library e-books.

Caro, I downloaded/bought a book from allaboutromance.com and it shows on my Kindle for PC, but not on Amazon.com under "Manage Your Kindle." Why not? How do I get it onto my Kindle Fire; using Calbrai (unsure of spelling)? I took that off my computer b/c it was using up too much hard drive.