142 views
What Else Are You Reading? > Help me find a book like that?

Hello,
I have recently seen the movie 'Jupiter Ascending' which honestly was pretty bad... but I really liked that idea of it.
It's not usually the genre I read but I really liked it. I was hoping anyone could help me find a book, or several books along those lines - a modern day sci-fi sort of thing that starts with a normal person sucked into this futuristic nonsense like in the movie.

The first things to come to mind aren't books but movies.

The Last Starfighter, Flight of the Navigator, and Explorers.

Now I'm curious about answers to your question.

So it's not quite the same thing because it's not modern day, but in Ender's Game, the main character is taken from his relatively normal school on Earth to go to Battle School! In space! And learns to think in the shifting references of three dimensions! I can't think of anything more on the nose right now.

Old Man's War is sort of like that. The premise is that old people from a future, but fairly "normal", earth can join the Colonial Defense Force, a military organisation who's goal is to establish humanity in space, once they feel they have nothing much left to live for on earth. There they discover that there's a lot more going on than they were led to believe.

The first Peter Grant novel (Midnight Riot) starts out with a normal police constable who gets recruited by a wizard and suddenly finds himself dragged into a supernatural world he never suspected exists. More fantasy than scifi, though.

There's the classic Heinlein juvenile, Have Space Suit—Will Travel. But the protagonist's not quite a fish out of water--he's pretty competent from the get-go.

This is more like the historical fiction version of that story, but Merlin's Mirror by Andre Norton. Two opposed alien factions used Earth as a battleground in the distant past, and during the Dark Ages their automated machines wake up and take different sides of the struggle in the Arthurian legends. The action stays Earth-bound, though.

From what I've read in this genre my favourite is Alan Dean Foster's A Call to Arms. A galactic federation of mostly anthropomorphic animal aliens is fighting an empire of mostly spider-aliens and losing. A scouting party from the federation discovers Earth, and learn that humans are by far the most physically scary badass creatures in the galaxy. That was pretty unique--kind of combining John Carter of Mars with more typical space opera.

The first suggestion must be The Hitchhiker's Guide to the Galaxy - the ultimate "normal person sucked into futuristic nonsense" story.

For me the quintessential would be Asimov's Pebble In The Sky. A retired tailor is thrust forward in time. Earth is radioactive and is a backwater of the galactic empire. Trantor burgeons but is not yet the capital.

I'm also partial to Double Star, where an actor takes over a politician's role - somewhat unwillingly. I believe this was inspiration for the movie Dave.

There's another Heinlein novel called Glory Road that's sort of a science fantasy take on this theme, but again, the protagonist is really badass and certainly no bumbler. Good book, though.

Yet another Heinlein Juvenile novel that might fit that description...

Tunnel in the Sky 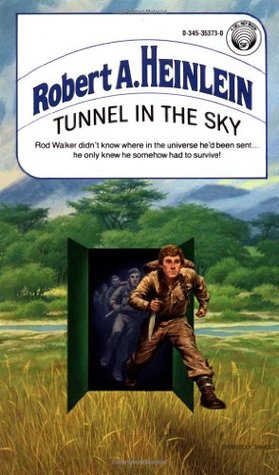 David H. wrote: "I sure hope that's not supposed to be Rod on the cover of Tunnel in the Sky... [spoilers removed]"

Sadly, I think it is.

Glory Lane by Alan Dean Foster might be what you're looking for.

It's part science fiction, part fantasy, but Roger Zelazny's The Great Book of Amber starts out in then-contemporary New York and expands out into a crazy multi-verse.