132 views
TV, Movies and Games > The Avengers: Age of Ultron - Here There Be Trailers

Was supposed to have been released on October 28, but a grainy version got leaked, so Marvel released the official one early:

It seems very romantic when Celine Dion sings with it.

I liked Marvel's response to the leak:

As for the trailer itself, it looks pretty cool. I was not a big fan of the Age of Ultron comic book event, so I'm hoping they will take more inspiration from the Ultimate version of that story. I also hope they don't show the Vision in any of the trailers, so we get a nice surprise in the movie.

Kind of on the fence about Ultron's final design. I rather like the idea of a non-moving mouth with fluctuating Kirby Dots to indicate his voice pattern. That rictus-like grin in a frightening Jack O'Lantern face has always been unnerving. Giving him actual teeth in a moving mouth feels odd to me after 40 years of seeing him the other way.

But I loved Avengers and I like most of Whedon's stuff, so I'm there opening day.

Mod
No Ant Man in Avengers was sad, but forgivable.

No Ant Man in a movie almost entirely about one of his inventions is ludicrous.

My bet is that he will feature in the "after the credits" surprise that Marvel love so much.

I'm sure GRRM agrees with you.

Tassie Dave wrote: "No Ant Man in Avengers was sad, but forgivable.

No Ant Man in a movie almost entirely about one of his inventions is ludicrous."

I just see the Marvel movie universe as an alternate history of what we've seen in the comics.

It makes more sense (well, for superhero movies, anyway) that Ultron would develop out of Stark's AI and Iron Man work than from a guy whose specialty is shrinking and talking to bugs.

Mod
A Biochemical genius who can shrink and talk to bugs. ;-)

I'm still going to see the movie and enjoy it. I can live with major changes if it helps the story. It just would have been a good way to tie the Ant Man movie and Avengers together and keep a bit of continuity with the comics.

Funny how DC fired this same director from the Wonder Woman movie.

And then they hire Zach Snyder in his stead. I think people went to see Man of Steel because it's Superman, not because it's good. The lack of quality showed up in the fact that MoS had no legs. It had a big opener and then fizzled. It earned 74% of its box office in the first 10 days, for a total of $216 million of its eventual $291 million.

Compared to Avengers, which kept making money for weeks, earning 76% of its ultimate box office over a span of 25 days for a total of $476 million, topping out at $623 million.

I think Batman vs. Superman will do huge numbers simply because DC is finally allowing its marquee characters to actually be on the same marquee, but if it's typical Snyder flick, it won't last the way Marvel's films have been doing.

Tassie Dave wrote: "A Biochemical genius who can shrink and talk to bugs. ;-)"

That's always been my problem with Ant-Man: whenever they needed a heel or a screw-up to drive a story, they stuck in Pym. He eventually became a Plot Device, which is why he was ultimately a super-genius polymath. He could do shrinking and growing as Ant-Man and Giant-Man, he was an expert in pheromones, telepathy, artificial intelligence, cybernetics, robotics, chemistry, computer programming, energy generation and on and on.

After a while it became obvious the writers didn't really know what to do with him so whenever they needed "someone to do X" in a story, they just had Pym do it. To my mind, that caused a dissolution of the character and he bordered on a mad scientist at times, always coming up with these wacky gadgets that ended up endangering New York or the world or something.

I think the movie version where Pym is an older inventor and it focuses on the new Ant-Man is a better way to go, because it cleans up that ridiculously messy and convoluted history.

I've watched the trailer 5 or 6 times and I can't wait to see the final thing. James Spader's voice/mo-cap performance alone will make it worth the ticket price. "There are no strings on me," what a line reading...creepy as hell.

Andy Serkis showing up in the trailer looking very much like Ulysses Klaw gives me hope that Age of Ultron will introduce the Marvel Cinematic Universe version of Black Panther.

The extended trailer, which I first saw on the October 28 episode of Agents of SHIELD: https://www.youtube.com/watch?v=eGwuo...

The part I particularly liked was the expression on Thor's face (view spoiler)[when Steve Rogers actually manages to make the hammer move a bit as he's trying to pick it up (hide spoiler)].

And here's a link to the Marvel movie calendar through May 3, 2019:

I'm surprised there isn't a Black Widow movie in there. She's earned it. Although there's a conspicuous gap in the summer of 2016, which they could fill with a Widow movie.

Changed the name of this thread a bit so it can be used for the posting of later trailers as they become available.

There's a slightly different trailer that dropped today. Mostly it just shows a few more seconds of CGI, but we do get a clearer shot of the mystery woman at the gathering. It's not Natalie Portman.

I think he means the woman at the party standing behind Thor. She looks Asian to me. I wonder if she's somebody's date.

A Chinese government attache, perhaps? One actress is listed as a "Korean scientist", but I can't tell if it's the same person.

Boy, I sure hope they aren't using Scarlet Witch as the Big Red Reset Button in this one.

She shows them/makes them experience alternate timelines or parallel universes, teams up with Ultron, has second thoughts, then puts everything back the way it was. Another House of M reset after an Avengers Disassembled situation.

The way Banner says "Ultron" implies he is familiar with it, as if he had a hand in creating it or modifying it, and all the infighting stuff looks like Wanda is doing to them what Loki's staff did in the first one.

I have heard that Stark makes him with Banner's help.
My theory with the Hulk/Hulkbuster fight is that Ultron is controlling the armor. Can't explain the Thor/Stark action though.
There's a long distance shot of a bald woman in this second trailer that I can't place.

I think that Ant-Man was originally supposed to be out before Age of Ultron, but all the delays forced a rewrite. So, now Stark builds the killer robot rather than Pym. I'm sad that we're not going to see Pym as Ant-Man, or Yellow Jacket, or as a super hero apparently. I can't see Michael Douglas suiting up in the Marvel Universe; while I'm fine with that, I wish they had found someone younger to ply Pym, to at least keep their options open. I know Marvel is trying to get away from origin stories, but I feel like their skiping some of the better material here.

Phil wrote: "There's a long distance shot of a bald woman in this second trailer that I can't place." Maybe Moondragon? Any rumors of her being in the show?

The Ant-Man trailer was just awful. They make it seem to be this dramatic, serious opus. And then Paul Rudd's character just makes that one off comment at the end to say he's not taking it seriously.

Avengers 2 looks awesome, Ant-Man however? That'll definitely be a pass for me.

Daran wrote: "I think that Ant-Man was originally supposed to be out before Age of Ultron, but all the delays forced a rewrite. So, now Stark builds the killer robot rather than Pym. I'm sad that we're not goi..."

I'm ok with moving Pym out of the role of hero. For obvious reasons. 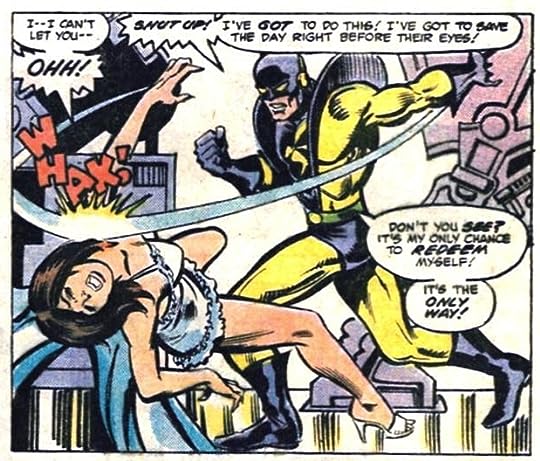 Besides, having the Stark/Ultron dynamic works better in the cinematic universe because we actually care about Stark's arc, vs a new guy no one knows or cares about.

Loved the brief glimpse you get at the end of the Vision.

Israel wrote: "Besides, having the Stark/Ultron dynamic works better in the cinematic universe because we actually care about Stark's arc, vs a new guy no one knows or cares about. "

Yea, there are already a lot of "main characters" in the MCU and there are more on the way. As someone who loves the movies but isn't interested in the comics I don't mind them condensing it a bit. The storylines are convoluted enough as it is.