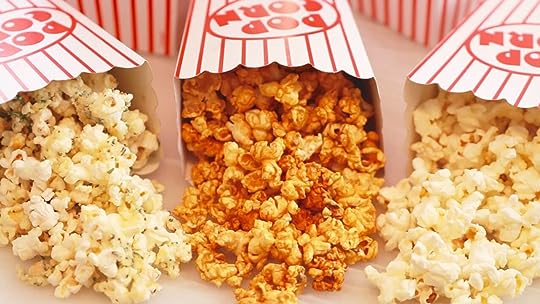 TO PARTICIPATE IN THE OCTOBER CHALLENGE:

♦Pairs will be posted on September 21st.

♦Select a series for your partner between September 21st and 24th...sooner is better.

Time for Halloween! At least one book in each pairing is Halloween and/or autumn-centric:

Lana'i of the Tiger

Murder Under a Mystic Moon

A Harvest of Bones

Liv and Di in Dixie

It's Your Party, Die If You Want To

My picks for October!

1. A Do-It-Yourself Mystery by Jennie Bentley

2. A Bibliophile Mystery by Kate Carlisle

The Case of the Faithful Frenchie

Do It Yourself Mysteries - Jennie Bentley

Ok. I'm kind of wondering if I'm involved in more book clubs than I can actually handle/manage. This is my only Goodreads book club that I'm actively involved with; but I have about 3 in real life. Also, this is my only club the does the cozy mysteries that I love so much (probably my favorite genre.) All this being said, I'd like to give it a go for October. Thank you.

Ghostly Southern Mysteries by Tonya Kappes (New to me)
#1

Psychic Eye Mystery series by Victoria Laurie (New to me)
#1

Tradd Street series by Karen White (New to me)
#1

Count me in! I'm being lazy this month, so I'm basically copying my theme (and choices) from September: "Knee Deep in the Hoopla." All of these choices are available on audio on Hoopla through my local library:

I'm squeaking in at the deadline again. Here are my picks for October ... none particularly haunting, but all "poppin.'" And all continuing.
Sherry Harris' Sarah Winston
All Murders Final! and A Good Day to Buy

Bookmobile Cat Mysteries by Laurie Cass (new to me)

Domestic Diva Mysteries by Krista Davis (new to me)

Mod
Welcome to the challenge, everyone. Pairs are posted at msg 2. Please pick a series for your partner.

I pick Liv and Di in Dixie for you. Love the title!

No doubt in my mind Connie! I pick the Haunted Guesthouse Mystery. I hope you love them as much as I do, great series, enjoy!!!!

Zermeena wrote: "I'm in - just under the wire!


Zermeena, I'm picking Writer's Apprentice for you -- I read the first one a few months ago and liked it quite a bit. I hope you enjoy!

Well I haven’t read this series but the ethnic eats one sounds interesting so that’s my pick for you. Hope you enjoy it. Happy reading!

I pick Donna Leon for you, I really enjoy her

Michelle wrote: "My picks for October!

1. A Do-It-Yourself Mystery by Jennie Bentley

Some great choices here Michelle - but I think a visit to Mackinac Island is called for - so the Candy Coated Mysteries are my pick for you!

Thank you Linda - I am glad to be catching up on these again!

I spaced and didn't join for October. I will be back for November and December.

Anne wrote: "I am in

I haven’t read any of your choices, but they all look good to me. I am torn between the Hamish Macbeth and the Murder She Wrote, but I think I will choose Hamish Macbeth. It’s a series that I want to try, too. Hope you enjoy them!

Kate, you have some of my favorite series this month. But we've been watching -- rewatching, really -- the Phryne Fisher series around here, so I'm picking that for you. Enjoy!

Linda wrote: "Back in again!

Hi Linda - I pick Death and Taxes for you. I read the first book in the series recently and loved it.

Jennifer wrote: "Zermeena wrote: "I'm in - just under the wire!

Thank you, Jennifer - I'm looking forward to these!

Cookbook Nook Mysteries by [author:Daryl Wo..."

Thank you Zermeena! I love this series!

Thank you Hilary! We actually just got back from Mackinaw Island and I’m ready to go back. Beautiful place!

Linda C. I always love starting a new series, I choose the Bookstore Cafe Mysteries for you. Enjoy!!

Barbara wrote: "Anne wrote: "I am in

I pick Liv and Di in Dixie for you. Love the title!"

Thank you, Nell! Cute, right? And on my TBR for way too long now...

I pick Nocturne Falls Universe for you!

I pick Nocturne Falls Universe for you!"

Wow, you’re the first person who ever picked them. And I have a bunch on audio. Thank you!

Hi Nell,
I don’t know any of your series or authors, but the Haunted Home Renovation series sounds like fun, so I’m choosing those for you.

I pick Donna Leon for you, I really enjoy her"

Thank you Anne. I love those too, and have been looking forward to catching up with them.

I pick Nocturne Falls Universe for you!"

Wow, you’re the first person who ever picked them. And I have a bunch on audio. Thank you!"

You're welcome! I saw how many you had listed and knew I had to help you knock out a couple of them.

Hello Sharon,
Sorry I running a little behind. Had a lot of difficulty deciding between Agatha Raisin and Maisie Dobbs. So I ended up flipping a coin. It chose Agatha Raisin. Enjoy!
P.S. If you'd rather, by all means go with Maisie Dobbs.

Thanks, Cynthia! I love Maisie but I've really been in the mood for lighter cozies latey. Agatha is the perfect pick for me this month.

Cynthia wrote: "Ok. I'm kind of wondering if I'm involved in more book clubs than I can actually handle/manage. This is my only Goodreads book club that I'm actively involved with; but I have about 3 in real life...."
Welcome to our group. I hope you enjoy it.
I choose for you the Tradd Street series. I read the first one and thought it was pretty good

Sound good I'll have to look into these.

Linda C. I always love starting a new series, I choose the Bookstore Cafe Mysteries for you. Enjoy!!

Thank you, Kate
Here's to a new series!

So sorry to be late, Barbara! Just got back from a weekend away. I don't know any of your series, but I love the sound of this one:

Michelle wrote: "No doubt in my mind Connie! I pick the Haunted Guesthouse Mystery. I hope you love them as much as I do, great series, enjoy!!!!"

Thanks, Michelle. I've only read the first so far, so it's time I got back to this series.

Sound good I'll have to look into these."


Thanks
It is a fun read. The ghost is a very interesting fellow