This is our discussion of the novel....

The Prologue contains the series' first reference to actual Romans. (There was a mention in book 2, Academ's Fury, to classwork called "Romantic Arts", but I didn't interpret that as actual Roman, just fine arts. It was probably Butcher having a laugh up his sleeve.) Apparently the Alerans are meant to be actual descendants of the ancient Rome Empire, somehow. (Kidnapped by aliens? Fell through a space/time portal?)

reply | flag *
message 3: by [deleted user] (new)
Apr 11, 2019 06:56AM
My ebook doesn't have a traditional fantasy Map, and I badly wanted one in the first couple of Chapters, which fly all over the Empire. So, for my reference as well as others is the map of Alera I once dredged up for the Imaginary Geography Quiz: 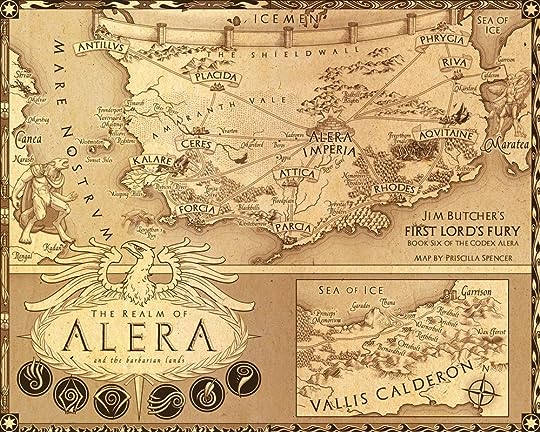 G33z3r wrote: "to classwork called "Romantic Arts", but I didn't interpret that as actual Roman"

But if you didn't know the origin Codex Alera and that it was written as a bet to mix the lost Roman legion and Pokemon, there's no reason to guess at their origins, and interesting that Butcher drops hints but it takes till the third book to make the connection clear.

I didn't quite finish the buddy read of the second Long Price Quartet book but should be able to start Cursor's Fury tonight or tomorrow.

It occurs to me that Romantic, in all its uses, is actually a bit like the adjective "Spartan" we talked about in another context, but as dead metaphors go it's more deeply buried from more frequent use. Like Spartan, it has lost its capitalization in most of contexts.

I read the first page! Apparently they play chess like they do in Star Trek, with multi-levels. But then that makes sense given the Knights Aeris.

A journey of a thousand miles begins with a single step.

Andrea wrote: "Apparently they play chess like they do in Star Trek, with multi-levels. But then that makes sense given the Knights Aeris."

I'm about half way in. I assume before the series is over, and possibly before this book is over, Tavi will offer some brilliant tactical insight on the brewing revolution based on his ludus lessons from Varg.

Not sure why Varg is a prisoner, since he was helpful in thwarting the Canim attack. But I suppose it's bad form to be the ambassador while your people are trying to assassinate the ruler to which you are ambassador.

How is it possible Amara & Bernard's marriage is a secret? They were wed in front to the whole legion plus assorted local volunteers, as well as Dorogo the Marat chief. And apparently Isana doesn't know until soon.

I like the salt arrows. Nice to know my margaritas are protection against furystorms. :)

Tavi's introduction to the reality of the legion is often hilarious. "Knights Pisces" indeed! :) Also, a Knight Ignus who's disabled with burns.

I'm enjoying this book more than the previous two. There's something a lot more interesting about the training in the legions and then the ensuing battle that is more engaging that the plots of the other two books. I'm actually starting to care about the characters of Tavi and Max. On the other hand Amara's lust scenes with her husband haven't earned her any brownie points. I'm just happy that Tavi's adventures are taking up more page space.

I'm a little bit past the halfway point now.

(view spoiler)[ It wasn't meant to be funny but I had this image of Tavi being hit by lightning like Wile E Coyote, a little fried, a little disoriented, with smoke coming out his ears. (hide spoiler)]

I liked it better than the previous books, too.

One reason is there seems only two plotlines (Tavi's & Amara's. Issana has a "plot", too, but it's just a quick excuse for some flashbacks that finally confirm Tavi's parentage.) And both those plotlines are linear and cohesive. The first two novels had so many things drop in from out of the blue that I was beginning to treat each complication with an exasperated, "now what?", another delay in concluding the plot (as if Butcher hadn't hit his page count goal yet and had to toss in yet another diversion.)

The Isana/Fade storyline was pretty annoying and unbelievable, I mean 20 days with only an hour of sleep per day while exerting yourself? And Araris came off as a YA heroine, doing the "I'm not good enough", and "I messed up" and "Oh, woe is me" thing. Unless that was his first battle (which I suppose is possible), he should know stuff happens and that people die and even if he was there he wouldn't have saved everyone, though I get the survivor's guilt part. Those scenes were important for filling in "Tavi"s background though.

In fact I don't much like any of the female characters except Kitai, though the evil ones amuse me :)

BTW, I figured out something I had complained about in the previous book. Turns out those related to the Lords are far more powerful than anyone else. Probably how they became Lords in the first place as their society evolved. The Steadholders are more powerful when compared to their equivalent in the cities, but Butcher didn't intend them to be more powerful than the elite.

I agree with all that. Yet it was a choice by Butcher: All he needed to do was drop in the flashbacks. He could have written the same flashbacks in a 2-day healing session as a 20-day session. There wasn't any reason to drag it out to such unbelievable lengths, unless trying to give the Isana character something to be a hero about.

Finished it, some interesting discoveries at the end of the book

(view spoiler)[
1 - Marcus was Fidelias, which was interesting because we view him as a villain but really he's just against Gaius, but not the whole realm, he'd be willing to back Tavi

2 - Both Fidelias and Gaius have figured out who Tavi is but Gaius isn't making it public, even though it would bring stability to the realm, since he feels that Tavi wouldn't be able to defend himself without furies

3 - Tavi has furies. And apparently so does Kitai, presumably she was able to do it the moment that Tavi did due to her bond with him.

Seems all them mysteries around Tavi's past have been unravelled, now we'll just have to see where the story goes.

The only mystery left is why Isana hates Gaius so intensly. Surely not just for sending Septimus off to war; that's pretty much a royal duty. Fidelias is at least plain that he hates Gaius because he thinks he's a bad emperor who has failed Alara. Even Amara seems to have expressed some qualms about Gaius, though perhaps for opposite reasons a Fidelias (she thinks Giaus is too coldly manipulative, he thinks Giaus isn't hard enough.)

Yet so far in the stories Butcher has portrayed Gaius as kind of avuncular.

So, anyone with Furycrafting can control the Fury Lights, even those who aren't fire crafters, which makes them as handy as electric lights in Alara. This seems inconsistent with the rest of Furycrafting, which requires you have a specific type of Fury under your control. And as for Tavi's sudden discovery, that seems an odd way; isn't he supposed to... I don't know,... meet his Fury (furies) and bind it? (Like Impressing a dragon on Pern.)

We have named Furies for several crafters (Isana's Rill, Bernard's Brutus, Amara's Cirrus), though I don't recall Max, Giaus, Lady Acquitaine, etc naming theirs. Maybe you only name Furies in PoVs (though Bernard seems big on shouting "BRUTUS!" out loud :) I don't think Butcher has yet explained the whole, "How I met my Fury," thing.

True. Though at the academy everyone seemed to be studying all fury elements, so maybe the fury lights are minor enough that anyone, even with an itty bitty amount of fire crafting can handle them? Maybe they are furycrafted by someone with fire skills and then can be easily triggered by just about anyone? That's actually a good question.

Similar things for the furycrafted roads, everyone seems to be able to use them to go faster and long (even the horses??) but you had to have at least minimum fury skills even if you weren't an earthcrafter.

Talking of furycrafted roads, I thought it was kind of interesting that you could craft a bridge that fixed itself, adjusted for temperature changes, could run water out of the way of people crossing, among other things. Definitely a handy thing. However...one would assume the fury would have to remain with the bridge after the engineer left to continuously maintain it, maybe it's not exactly one fury one person? Or there are minor furies for things like binding to a bridge, and then a major one that one would normally name and consider a companion?

Guess that is something we can look forward to in the next books, how Tavi gets his furies, maybe will get explained more.