Mod
This thread is open to discuss The Seven Rules of Elvira Carr by Frances Maynard. 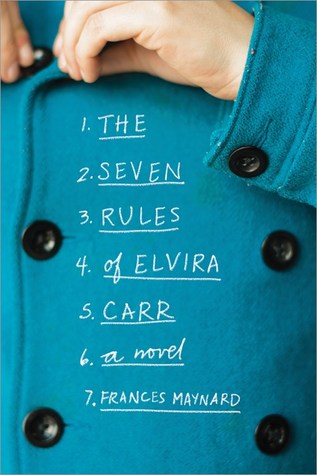 Elvira Carr believes in crisp schedules, clear guidelines, and taking people at face value. She lives at home with her overbearing mother, who has deemed her unfit to interact with the rest of society.

But when her mother has a stroke, Ellie is suddenly forced to look after herself. She quickly comes up with an ingenious way of coping with the world: the seven social rules spreadsheet.

Unfortunately, Ellie soon discovers that most people don't live their lives within a set of rules. As she experiences social missteps and awkward encounters, Ellie continues to learn – about herself, and the people around her. And she'll need this new knowledge if she hopes to pave the way to living life on her own terms.

Hi Karla and Erika - are you guys still up for reading this one?

SandyL wrote: "Hi Karla and Erika - are you guys still up for reading this one?"

I still want to read it. I've just been busy and have to get a late start. If you are still up for it, I'm in.

I’m finishing up a bunch of books but i’m up for it too. Its been hanging out on my shelf for so long!

I'm up for it - I've borrowed it from Overdrive and have to return it soon, so if we can get started now I'm still up for it!

The Seven Rules of Elvira Carr (other topics)