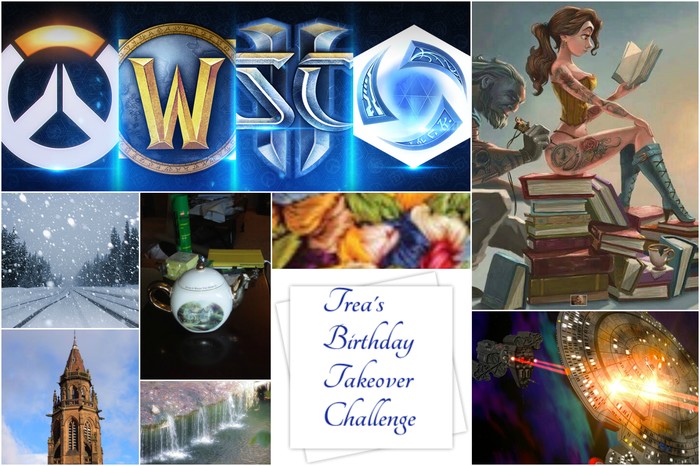 It’s Trea’s birthday month! As the newbie on the mod team, she'd like to introduce herself to the group, so, here’s her January Takeover Challenge!

RULES: Choose from the list below, selecting a category more than once, if you desire. Also, there is the Spell-It-Out Option. Or you may do a bit of both!

Her favorite color is blue.
Read a book with blue cover.

She has short and naturally curly hair.
Read a book where the heroine has curly or short hair.

She is currently married to her high school sweetheart, and they just celebrated their 11th wedding anniversary in October.
Read a book where the hero and heroine are High School Sweethearts, or a book that is the 11th book in a series.

She is an avid crocheter and weaver, and often has several projects in the works.
Read a book with a heroine that likes to do some type of yarn crafting like crochet, weaving, or knitting.

She has lived in Ohio her entire life, with no plans to leave, unless it is for a short vacation.
Read a book set in Ohio.

She takes walks every day in an effort to reverse Pre-Diabetes, the full blown disease that runs in her family.
Read a book with a heroine that likes to take walks/walk everywhere or that is diabetic.

Trea is an avid Gamer Girl, mostly on PC, where she plays such games as World of Warcraft, RIFT, Diablo 3, Hearthstone, and City of Heroes/Villains.
Read a book where the heroine plays video games specifically, participates in a friendly game of cards, a book that has a superhero/supervillian or angel/devil MC, or a book that is labeled as Fantasy. Bonus points if it is a World of Warcraft or City of Heroes Tie-In novel!

She homeschools her elementary school aged son, due to his autism delays.
Read a book with a heroine that is a teacher or has an autistic child in it.

Her favorite season is Fall.
Read a book set during Fall.

She prefers to drink tea, hot or chilled, but very sweetened.
Read a book where a character drinks hot tea, iced tea, or Southern Sweet Tea.

Spell-It-Out: Use a word that reminds you of something about January, or choose one of Trea's favorite words that are listed below, and then spell it out. Read books with titles, series names, authors (first or last name), character (first or last name), that begin with letters that correspond to letters of the word you choose. You may ignore the indefinite and definite articles (a, an, the, etc.). Such as:

Example of Spell-It-Out: - We used books that are coming out in January, something you do NOT have to do.

Check out Add a Book & Bookcover Link, if you need to know how.

2. Read books with Native American characters or books of the westward movement=

My challenge, so I'm in!

Forgot to say "Im In"
Will try for this Monthly Challenge

Read a book where the heroine has curly or short hair.Death Angel

Read a book that is labeled as Fantasy. Year One

Read a book where the heroine has curly or short hair.Death Angel

Read a book that is labeled as Fantasy. Year One

Read a book with blue cover.Three to Get Deadly

Read a book where participates in a friendly game of card. Kulti

Congrats Sandra and Silva and ShoSho! :-)