Man, that would be awesome.

Would there be one winner or one for Sword and one for Laser?

My recommendation would be for one of each. That way, fans of both are served equally.

We could do a shortlist... nominate whatever you like, the top 10 make a final ballot, etc. I like the idea though I think we'd have to find some way to automate it etc.

Agreed. This is an excellent idea.

Mod
We've talked about it! But there are already so many awards out there...

But not a Sword & Laser award!

Perhaps the Sword and Laser award(s) could be geared towards works which most of the current awards are not addressing.

The easiest might be an award for the best Sword and Laser pick for a given calendar year. Folks get to vote for their favorite book out of the year's picks. The downside is that you're working with what could be argued is too small a pool of potential winners.

An alternate possibility, classics which were overlooked during their initial run. That is, they never won a Hugo or Nebula or whatnot, but over the passage of time have proven to have greater legs than those works which were so honored.

It's tempting to suggest as an award category small press and/or self-published works, since many of the current awards for such require submission fees and therefore tend to come across primarily as money-making ventures for their organizers, but the potential nightmare this scenario almost certainly would create terrifies even me, and I am a self-published novelist.

Someone else want to have a go?

Honestly, I'd just do an award for best SF and best Fantasy novel published in the previous year. Not read in but published in. The downside to this is that people will nominate things outside the prior year. I wonder if we could create a huge list on Listopia and then use the Goodreads API to filter that by publication date, leaving us with a long list of things that are eligible. If so, then people could nominate by adding a book to the list and at some point T&V could close the list (is that possible?) and we could all vote for the top 10. Move those to a new list and we vote for the one we feel was best in each category.

The S&L group has better judgement than the Hugos.

Tamahome wrote: "The S&L group has better judgement than the Hugos."

Tamahome wrote: "The S&L group has better judgement than the Hugos."

I dunno, I have yet to really like a book that's won a group poll for next read. :D ;)

I think Killian means just voting on the books we read as a group the previous year. I think that would be a fun idea. I've always wanted some way to see what the group as a whole (as opposed to the dozen or so usual posters) has rated a book.
I know as far as I'm concerned, I rarely read a book as soon as it comes out so voting on books published in the previous year wouldn't personally be of interest to me.

Honestly, I'd be more interested in a "what was the best book we, S&L, read this year" discussion or sub forum on goodreads than a "s&L award for the best book published this year." Maybe even a reflective wrap up the year episode. That would be definitely be less work than an award

Rob wrote: "Honestly, I'd be more interested in a "what was the best book we, S&L, read this year" discussion or sub forum on goodreads than a "s&L award for the best book published this year." Maybe even a r..."

I agree. I like S&L as a place for discussion. Plus I think there's value to the big established awards like the Hugos. I just got a supporter pass to Loncon and I'm going to be making a big effort to search out things to nominate for next year's Hugos.

Perhaps rather than exert all the effort into creating our own awards we should become more active in those that are already established. Only 1923 nominating ballots were submitted to the Hugos! Imagine the impact we could make if only 10% of us joined that.

It seems much more feasible with just the S&L official picks.

Are we imagining a physical award, like a Sword & Laser tankard o' excellence, or more of a Stan Lee No-Prize sort of award?

You win a miniature Lem the Dragon.

Actually... a mini-Lem would be awesome. 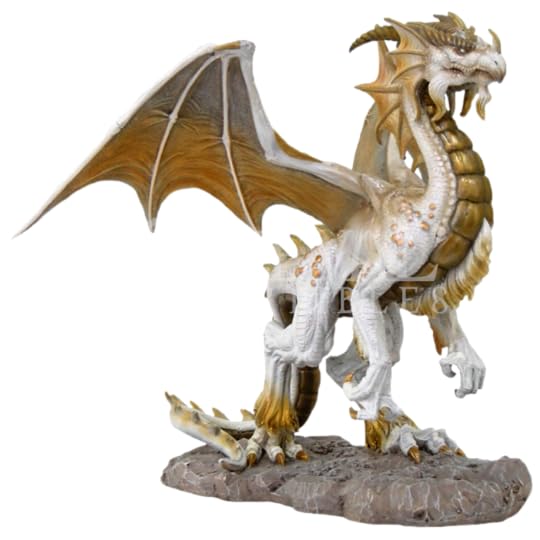 I have to agree.

And Tom & Veronica probably aren't mean-spirited enough to have a worst book of the year award.

I still want one to exist.

You might want to be cautious when abbreviating "The Sword and Laser Awards", since L is just one letter away from M.

Either the Lemmie or the S.A.L.ly . Or maybe S.A.L.L.Y. for Sword and Laser Literary Yummy. (sorry I couldn't think of a good Y word).

The Sword and Laser Superlative Award (The S.A.L.S.A.)?

The Lemmie is catchy.

If we give out one for sword and one for laser, we could call them The Veronica and The Tom.

Can they be action figures?

(The award, not necessarily the action figures...)

I think this is a very good idea, and support it. But I also understand Veronica's sentiment. Even though we may have 10x more potential voters here then the Hugo's. This award will have a long road to go to be as prestigious as the Hugo's. That's not to say we shouldn't start. I think this could be real fun, and definitely needs a physical "Lem" award, but we have to be realistic about what it will be. I mean look how long the Locus and Nebula awards have been around, and they don't have 1/4 of the standing in pop culture of the Hugos.

I am all for an award, but only as long as we do not take it too seriously. I think we are getting a little ahead of ourselves with comparing it to other awards and physical trophies.

We are a book club, lets vote for the fun of it.

Darren wrote: "The Lemmie is catchy."

Lemmie is good, but Ian Kilmister might object to Lemmy with a 'y' :)

If we actually do this, I volunteer to help coordinate the voting and such. :)

Lemmie is good, but Ian Kilmister might object to Lemmy with a 'y' :)"

The winners have to talk into a microphone above their heads.

Andy wrote: "I am all for an award, but only as long as we do not take it too seriously. I think we are getting a little ahead of ourselves with comparing it to other awards and physical trophies.

Agreed, there's no reason we can't just have a fun vote for a few things, e.g. the S&L favourite fantasy and favourite scifi novel released in a given year, one for short stories, and the "Lemmie" for most popular book club pick of the year.

That's what I was taking from this thread, that it was an "award" just for the fun of the club. But for sure we'd want to let the authors and publishers know about it ;-)

Mod
Oh man this is fantasic! The reason we resisted awards before is we couldn't think of a good way not to replicate existing ones. But you hit on it! We just pick the best of our reads. And the Lemmie is perfect.

I would think we'd give one sword and one laser, but what do you think? Just one overall?

I vote for one sword and one laser (and I'm still going to refer to them as The Veronica and The Tom.)

I would have to say just one award for each year. We've already narrowed it down a lot by only allowing book picks (BTW, would official Alt picks qualify?). If we gave one Sword and one Laser, then we'd only be picking out of 6 book pool.

And I know that many of us suggested that this is all in fun, but I can't help but wonder if we do start such an award, would their chances of winning be a factor in future picks? I'm not sure that would be a positive consequence of this idea.

Tom wrote: "Oh man this is fantasic! The reason we resisted awards before is we couldn't think of a good way not to replicate existing ones. But you hit on it! We just pick the best of our reads. And the Lem..."

The hive mind rules. I would vote for one overall. It's easier that way, maybe not easy during the voting but there must always be "one to rule them all" so to speak.

I vote a Sword and a Laser award, and an ultimate winner overall (just to complicate things!).

I think one overall winner would be best. And we could include the alternate picks. Then we could vote from a pool of maybe 15-20 books. What do you guys think?
Oh, and Lemmies sounds great!