This topic is about The Hobbit, or There and Back Again
167 views
Sword and Laser Video Show > S&L Video- #20 Book Club - 'The Hobbit' Wrap-Up & Your Feedback!

We've survived the Mayan Apocalypse AND avoided overdosing on candy canes, which means its time to wrap up our final pick of 2012, JRR Tolkien's The Hobbit, let you know how we enjoyed the movie adaptation, and check in with everyone here on Goodreads.

If Tom and Veronica really feel the Hobbit was not true to the book, Ender's Game is going to be even worse when it comes out next Thanksgiving.

Nice wrap up and I still have to find time to see the movie!?!...I think I will feel the same way about it as Tom did as I have seen enough of the video blogs, about the making of it, to get a sense of what Peter Jackson was doing, to know it wasn't going to be a strict retelling of the original story. It's all good to me though!!

Kevin wrote: "If Tom and Veronica really feel the Hobbit was not true to the book, Ender's Game is going to be even worse when it comes out next Thanksgiving."

Every time I hear mention of this, I cringe.

I think this says it all. 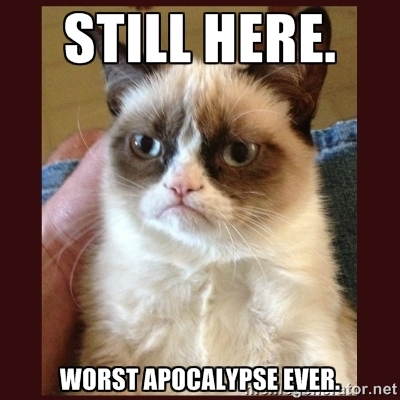 The Hobbit movie is a good movie, it's just overlong and boring in parts. I can imagine as a home blue ray, with the freedom to pause, have a snack, go to the bathroom, take a break, it would play better. I even enjoyed Jackson's clear additions. Having read the book along with you all, I'm concerned that already Bilbo as a character seems significantly different in the film, and in a way that doesn't help. He's more sarcastic, snarky and sardonic (all the same thing?) And far too heroic by the end of part one so that I don't see much more to go in Bilbo's emotional journey in part 2 and 3.

The dwarves are great, but I'm interested to see how Jackson plays with the moments where the dwarves aren't being "their best selves," so to speak. Such as when they allow Bilbo to go into the Dragon's lair by himself. In the book, Tolkien is very clear that this is a lot to do with simply the way Dwarves think but I can see how these sort of actions will make them seem unlikable.

Oh, one more thing: the 48 fps seemed, to me anyway, totally useless. It added nothing to the experience, and annoyed in moments of brief quick action, fooling my eye into thinking that I was watching sped up video. I did like the 3d and felt it was used wisely and to great effect.

Loved the episode. Loved the video review too. Great work. I loved the movie - but not a fan of the 48fps. But the whole cinema applauded at the end. Its been a while since I've seen that. The book didn't really float my boat so I'm not upset they didn't stick to the book - the movie was great. I agree it was slow in parts - but so was Fellowship of the Ring. I loved the interaction between Gadriel and Gandalf - School boy crush? or is it hinting at some past history between the two?

Anyway, another compulsory Saturday morning viewing over breakfast done. Very nice. The show that is. Heads up - cornflakes and keyboards don't mix.

I think Veronica and Tom were spot on with the book vs film comparison though I didn't like film as much as they did. Would have loved to see a truer to the book film, but it is what it is.

Highlight of this episode was seeing one of my comments scrolling by during the anticipated books of 2013. I've hit the big time and have a happy now! (the little things in life). hahaha

Mod
Jeff wrote: "Highlight of this episode was seeing one of my comments scrolling by during the anticipated books of 2013"

Geek's Guide had a good discussion of the Hobbit with 'The Tolkien Professor' (who has his own podcast), and he defends the movie, after a Philip Pullman interview:

Tom, if you want a hobbit movie that sticks closer to the book, rent the old 1977 Rankin/Bass cartoon. It sounds like John Huston plays Gandalf:

Tamahome wrote: "om, if you want a hobbit movie that sticks closer to the book, rent the old 1977 Rankin/Bass cartoon. It sounds like John Huston plays Gandalf: "

Do they have a 3d hfr version?

They tried to make one, but the animators' wrists fell off.

Speaking of Elrond...The very 1st time I saw him in "Fellowship..." all I could think was "Mr. Baggins, it would appear you have been leading 2 lives..."

Tamahome wrote: "Geek's Guide had a good discussion of the Hobbit with 'The Tolkien Professor' (who has his own podcast), and he defends the movie, after a Philip Pullman interview:

I was also going to recommend the animated version, even though I can't totally vouch for its true-to-the-book-ness because it wasn't something I could really get into.

I loved this episode and thought it was very smart to not think of the book and movie "as a package". I have lots of friends that love the LOTR but have never invested time in to reading any Tolkein so they don't understand why I'm not absolutely in love with the film vs. book.

I'm also not stoked on Jackson choosing to make this book a 3-parter. I would have loved to see more from the actual trilogy if they were going to head down this road.


Dennis wrote: "The Hobbit movie is a good movie, it's just overlong and boring in parts. I can imagine as a home blue ray, with the freedom to pause, have a snack, go to the bathroom, take a break, it would play..."

I loved where this post went with how heroic Bilbo already seems at the end of the first film. From what I remember reading the story many years ago he seemed very reluctant in doing anything until the end of it.

If I weren't so busy with my book queue this coming year, I would have loved to go back and reread everything Tolkein. Maybe I'll have time at the end of 2013.

It seems that I had the same opinion that Tom and Veronica had about The Hobbit movie. It was great, but it wasn't The Hobbit. My friends haven't read the book and years and weren't sure where the additions were. Needless to say, I had to keep myself from going on the soapbox. For the next movie, I am just going to tell myself that it is The Silmarillion with a little of The Hobbit added in.

Tamahome wrote: "Geek's Guide had a good discussion of the Hobbit with 'The Tolkien Professor' (who has his own podcast), and he defends the movie, after a Philip Pullman interview:

I've been following The Tolkien Professor from one podcast to another as he makes his rounds, and I can't wait for his long overview of the film, which supposedly comes out soon.

Tamahome, that Rankin/Bass cartoon is a lot of fun and I think it captures the proper spirit. The songs sung by Glenn Yarbrough break my heart every time!

I enjoyed Jackson's first Hobbit film, but think it will play better in view of the trilogy as a whole. It just didn't have a natural breaking point quite like the Fellowship of the Ring film, though I understand why they emphasized Thorin accepting Bilbo as their emotional climax.

William, are you going to Tolkien school?

Tamahome wrote: "William, are you going to Tolkien school?

Tamahome, I've been interested in Mythgard for quite awhile, but my time and money have not aligned to allow me to pursue that interest!

Have you taken any of their classes?

I think Miss Belmont was absolutely correct about Jackson's treatment of hobbits. I haven't seen the new movie, but in the previous movies Jackson downgraded the hobbits to comic sidekicks, whereas for Tolkien they were the central characters of the novel. Both The Hobbit and The Lord of the Rings were stories about hobbits; not men, not dwarves, not elves, but hobbits.

Yay, a link I posted got used in the episode. I feel like I've contributed something to the community and can now die happy (I'm easy to please).

As for the film, my favourite moment was the 'Over The Misty Mountains Cold' song by the dwarves at the beginning of the movie. I hope there are more moody, Gregorianesque songs in the remaining two parts of the trilogy.

Just wanted to say that Tim's video review of Tolkien's essay "On Fairy Stories" inspired me to find the original online, and read the whole thing for myself, and I'm glad I did. I particularly liked these lines in defense of "escapist" literature:

"Why should a man be scorned if, finding himself in prison, he tries to get out and go home? Or if, when he cannot do so, he thinks and talks about other topics than jailers and prison-walls?"

Makes me think that the people who scorn "escapist" genre fiction are afraid that people who read it will start criticizing the Status Quo, and maybe even try to change it... And we can't have that, can we? >;-)

All The Hobbit movie hate baffles me. Nothing is ever spot on when adapting a book to film. Yes Jackson has taken some liberty but I think it makes for a better film experience. It was nice to see a Gandalf that actually acted like he has a pair. The dude that plays Bilbo is absolutely perfect for the part.

I think people would make things far easier on themselves if they just went into a film with the mindset that it will be nothing like the Book. Every adaptation is a new experience, a remix if you like.

Oh and Ann ^ .. spot on with the escapist argument. I have found myself in that particular debate more times than I care to admit. Same argument with those that don't read genre fiction because they don't consider it to be "literary". Makes me laugh and giggle and eat cookies for 16 hours.

^ Wonders if anyone will get that reference.