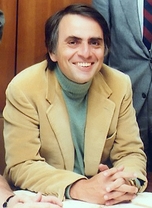 “The best way to avoid abuses is for the populace in general to be scientifically literate, to understand the implications of such investigations. In exchange for freedom of inquiry, scientists are obliged to explain their work. If science is considered a closed priesthood, too difficult and arcane for the average person to understand, the dangers of abuse are greater. But if science is a topic of general interest and concern - if both its delights and its social consequences are discussed regularly and competently in the schools, the press, and at the dinner table - we have greatly improved our prospects for learning how the world really is and for improving both it and us.”

43 likes
All Members Who Liked This Quote