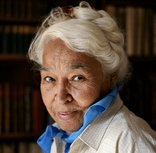 “What we require is not a formal return to tradition and religion, but a rereading, a reinterpretation, of our history that can illuminate the present and pave the way to a better future. For example, if we delve more deeply into ancient Egyptian and African civilisations we will discover the humanistic elements that were prevalent in many areas of life. Women enjoyed a high status and rights, which they later lost when class patriarchal society became the prevalent social system.”