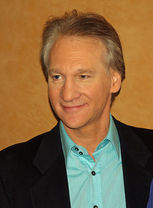 “There's an old, frequently-used definition of insanity, which is "performing the same action over and over, expecting different results."... Now, I'm no doctor, but I am on TV. And in my professional opinion, George Bush is a paranoid schizophrenic. ...

...Other symptoms of paranoid schizophrenia are: Do you see things that aren't there? Such as a link between 9/11 and Iraq? Do you - do you feel things that you shouldn't be feeling, like a sense of accomplishment? Do you have trouble organizing words into a coherent sentence? Do you hear voices that aren't really there? Like, oh, I don't know, your imaginary friend, Jesus? Telling you to start a war in the Middle East.

Well, guess what? There are a large number of people out there also suffering from the same delusions, because there are Republicans, there are conservatives, and then there are the Bushies. This is the 29 percent of Americans who still think he's doing "a heck of a job, Whitey." And I don't believe that it's coincidence that almost the same number of Americans - 25 percent - told a recent pollster that they believe that this year - this year, 2007 - would bring the Second Coming of Christ!

I have a hunch these are the same people. Because, if you think that you're going to meet Jesus before they cancel "Ugly Betty," then you're used to doing things by faith. And if you have so much blind faith that you think this war is winnable, you're nuts and you shouldn't be allowed near a voting booth.”

95 likes
All Members Who Liked This Quote