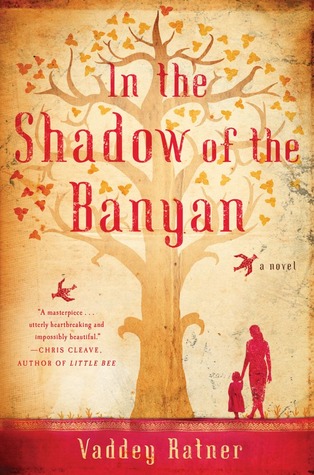 When the Khmer Rouge took control of her homeland in 1975, Cambodian author Vaddey Ratner was merely a child. She now fictionalizes her extraordinary story of survival in her debut novel, In the Shadow of the Banyan. Seven-year-old protagonist Raami, the privileged daughter of a prince, sees her family split apart by the ruling party's radical policies and witnesses the horror of the killing fields. This novel traces the footsteps of the author's own family as they fled Phnom Penh for the countryside.

Ratner reached the United States as a refugee in 1981 and now lives in Maryland. She shares with Goodreads images of her native country and a piece of traditional Khmer music that offered inspiration as she wrote her book In the Shadow of the Banyan. 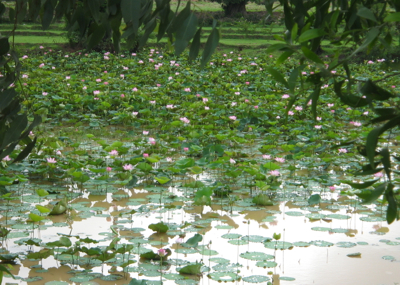 "Lotus pond among rice fields."
Goodreads: Why did you decide to write a novel instead of a memoir? What details were important to you to keep true to fact?

Vaddey Ratner: Even as a child living the experience, I knew that if I survived, I would have to tell this story, not in the form of a book but as an explanation, an apology, answering the question I felt I would be asked: Why I (who had been handicapped by polio from infancy) was still alive when so many in my family, healthier and stronger, perished one by one? As I grew into an adult, this question haunted me, and as a result I always felt that my life wasn't mine alone, for it carried with it the hopes and dreams of those silenced. In the circumstances through which I lived, survival and death could be arbitrary. The one thing that made sense to me was that I could not have survived without the courage and the sacrifices of my family members.

When I came to write In the Shadow of the Banyan, it wasn't enough for me to write a simple chronicle of facts and events. I wanted to achieve something larger and more lasting, which was to honor my family with a work of art. I wanted to transcend their suffering. I felt that even if I failed, at least I could honor them with my endeavor.

In writing I wanted to stay true to the tragedy my family experienced, the atrocity as I remembered it. Many small things I felt free to change, such as the number and identity of family members depicted in the novel; the sequence of minor events in the journey; the names of towns and villages, many of which are invented, combining the details of various places to create a unique setting in the story. In framing the larger political context, it was essential to be faithful to the historical record.


"A beautiful piece of Khmer music that I often listened to while writing."
GR: What is the significance of the book's title? We know that in the book, Raami's grandmother tells her, "There will remain only so many of us as rest in the shadow of a banyan tree..."

VR: In choosing the title I wanted something that would be very Cambodian and have an evocative, poetic quality in English. The grandmother's words are my rendering of a Cambodian prophecy. The prophecy portends tragedy, yet the banyan is also a symbol of safety and shelter, of survival and resilience over time. What's astounding is that the saying encompasses so much—politics, history, culture as well as an intimate narrative with the accent on "us." Our story, our history, can haunt us, but it is also what roots us and gives a sense of connection when we feel alone.

GR: As you were still quite young when you left Cambodia, was it difficult to recall details? Did you work with your mother or other survivors to flesh out your story?

VR: The overall journey, from the forced exodus to the countryside to our final escape across the border, I remember very clearly. Many of the heartbreaking events that I describe in the novel I remember in the way a child does, not always with awareness of the broader context but with a distilled emotional clarity. The descriptions of the physical settings and nature are also from memory, nourished by the observations I made reliving the cycle of the seasons and recording them in my journal during the five years that I lived again in Cambodia with my husband and daughter. My education at Cornell University also gave me a broader understanding of the politics and history of the region. 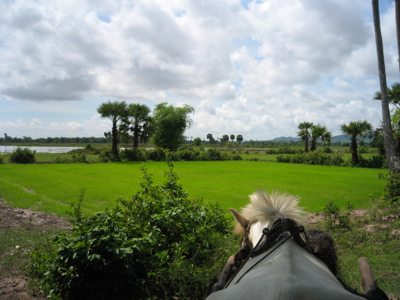 "Rice paddies and palms."
Other details about our family's experiences emerged in talking to my mother over the years, sometimes confronting her with the question "What exactly happened?" Often it was too painful for her to talk about, and the answer would come much later, in the most unexpected moments. While I was able to reconnect with living relatives, I did not conduct formal interviews with them or other survivors to research my writing. I've learned that often people only share what they can bear to share; the rest comes out over time, and sometimes not at all. As for revelation, or disentangling the past, I believe it comes primarily through careful listening in the midst of everyday interactions and conversations and, subsequently, my own reflection in solitude about those encounters and the words exchanged. A single sentence can unravel a decade of mystery.

GR: How has Cambodian literature responded to the Khmer Rouge and Cambodian history?

VR: There are many first-person testimonials, both in Khmer and English, published by other survivors of the Khmer Rouge. One I've read is Stay Alive, My Son by Pin Yathay. I found the Khmer version extremely moving. The Death and Life of Dith Pran, the slim volume by Sidney Schanberg, is a must read. Another perceptive memoir dealing with the Khmer Rouge is The Gate by François Bizot. For a historical perspective I highly recommend Philip Short's Pol Pot, an excellent study of the leaders and the society that formed them. Another outstanding piece of scholarship is David Chandler's The Tragedy of Cambodian History. There is also a wealth of Khmer literature from before the war, but most is not yet available in English translation.

This sounds like a remarkable book and story. I will put it on my "To read" list

This masterpiece is so beautiful that you won't be able to put it down. Ratner pulls the reader into the lives and hearts of her characters, holding their hand through unbelievable tragedy, inspiring hope and triumph through tears. One of the best books I've ever read.

The Killing Fields traumatized and emphathized me to the history of Cambodia, so I am drawn to this book out of compassion to the struggles of the everyday people of Cambodia. A must read on my list.

looks interesting book for the reader writer like me.

Love to read true stories. This one looks like a real gem.

Even in this interview, this author speaks so profoundly from the heart, with such depth and intelligence that borders on poetry. I look forward to reading this book as difficult as I know that some parts of it will be. We must never forget these tragic and senseless genocides across the world. May it renew our commitment to peace in spite of the rash decisions of our governments.

I just started reading this book and now I realize how deep the author's roots are in poetry--her father was a poet. In my first comment I didn't know that (message 6), but it comes through in how she speaks in this interview. It is beautifully written and hard to put down.

I just started to read this book today. So far I really like it and am enjoying the poetry

I look forward to reading this.

Yes indeed, I am looking forward to reading this!

The gal who does my hair is from Cambodia but never tells anything about her experiences growing up there. I would like to know more. Thank you, Peg

Those cruel stories of systematic destroying of whole groups of people are always painful and hard to read but those who survive must tell the story so it wont be perished with the victims.

This is one of the books I've been looking forward to for a few months. I haven't got around to picking it up yet but I definitely want to make sure I read it 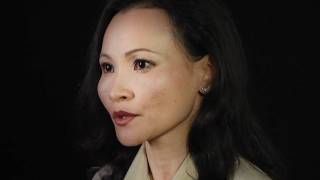