Posted by Goodreads on July 5, 2011
13 likes · 2 comments
Ben Mezrich's heroes have plenty of brainpower but even more guts. The nonfiction writer revels in the stories of bold geniuses who dare to try the seemingly impossible. In Bringing Down the House (which also became the hit movie 21) he wrote about a band of MIT math whizzes who beat Vegas odds to win millions, and in The Accidental Billionaires Mezrich offered a peek into the psyche of enigmatic Facebook CEO Mark Zuckerberg. (Billionaires later became the Oscar-winning film The Social Network.) His new work of true crime is about a man no less ballsy than his previous subjects. Sex on the Moon introduces Thad Roberts, an aspiring astronaut who ruined his burgeoning career at NASA when he impulsively decided to steal a stash of moon rocks from a high-security vault for his girlfriend. The stunt earned him almost seven years in prison, and the week he got free he called Mezrich. The Boston-based writer tells Goodreads about how NASA tried to block his research and why writing is a painful process. 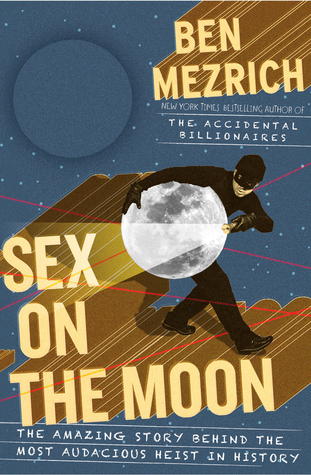 Goodreads: Brazen geniuses are frequently featured in your books. Is a high IQ a license to break the rules?

Ben Mezrich: People who are ridiculously smart often end up questioning the rules—and sometimes that leads to breaking them. On the whole, the people I write about live in that gray area between right and wrong; they don't see themselves as doing anything overtly bad. They just take chances to do something cool and different.

GR: Do you consider yourself a risk taker? What's one of the crazier things you've done, perhaps for the cause of book research?

BM: I'm actually afraid of everything—I am very neurotic. But when I'm writing and researching I become like Hunter S. Thompson, without the guns and drugs. I take chances only when following a story. I spent time following Yakuza gangsters around when I wrote Ugly Americans, even ended up in a Yakuza bar in Osaka that almost turned ugly. For Bringing Down the House I was chased out of casinos and stuff like that. I've done some crazy things over the years, but in my real life I'm kind of a hermit.

GR: What first piqued your interest in this subject?

BM: It came out of the blue. Thad Roberts reached out to me. He had just gotten out of prison, and I've sort of become the go-to guy for brilliant people who do crazy things. I was blown away by this story. I've always wanted to write about NASA, and this guy literally stole a safe full of moon rocks. How cool is that?

GR: Tell us about Thad Roberts. How do you think such a smart, ambitious guy got so obsessed with a heist that he must have known could ruin his chances of becoming an astronaut?

BM: He's incredibly complex, romantic, and a little crazy. He's a genius, but he did something utterly stupid, partially out of love, partially out of the need to be this James Bond type of character. He risked everything—being an astronaut, his freedom—to do something so utterly insane, and yet when you read the story, you'll see that it's not a simple question of motives. It's very complicated.

GR: Goodreads member Charley Greiner asks, "Was NASA cooperative when you were researching the book?"

BM: No, they basically put out the word that nobody was supposed to talk to me. I did manage to find my way inside the NASA campus and went on a level 9 tour. Thad was texting me the whole time, telling me where to look, which door to wander through, etc. It was awesome. I also found some great sources inside. So NASA wasn't officially cooperative, but I think when they finally read it, they will like how I described the place, because I'm a big fan. I think it's basically Disneyland for geeks like me.

GR: You've received a lot of attention for your nonfiction work, but you also have written several works of fiction. How does the experience of writing nonfiction and fiction differ, and do you plan to continue writing fiction?

BM: Well, I really love the fun of living my stories, and with real stories you can actually follow the characters around, be a part of it—it's quite a thrill. As long as the awesome stories keep coming my way, I'll keep writing nonfiction. I will probably do a novel or two along the way as well, but the nonfiction is where I've found my voice.

GR: Goodreads member Aggie Adkins writes, "I love Ben's previous books and am wondering how does he choose a topic? They are all varied and fascinating."

BM: It's got to have the elements that turn me on. Young geniuses doing something wild and crazy. That gray area between right and wrong. Money, sex, danger, and now romance. I think Sex on the Moon is a broader book than I've written before because this brilliant kid actually did fall in love—that's new for the sort of guys I write about. I look for stories that I would want to be a part of or those that I would want to live in as I write them. I'm a method writer.

GR: Goodreads member Rusty writes, "Your books have been scrutinized, and somewhat criticized, for authenticity and being too much of a dramatic narrative account. Does this affect your research and writing style when it comes to new books?"

BM: My style is controversial to some journalists, and yes, there are tons of stories about how I write, but I feel strongly that what I do is a very intense, well-researched form of nonfiction. I put a note about my process right in the front of each of my books—I interview dozens of people involved in the story, compile thousands of pages of court documents, hundreds of pages of research—and then write the true story in an exciting, thrilleresque manner. It's all true, all documented, but written in a way that I find compelling. I think because of the scrutiny, I actually spend more time documenting and researching than people might realize because I know there are journalists out there looking into my stuff carefully. But I've always been upfront about my style. Some people get it, some people don't.

BM: Nothing is typical anymore, but usually I spend a few months researching—which is really going out there and living my story, becoming a part of it, whether that entails going to Vegas, sneaking around NASA, or chasing the Winklevii around a boathouse. Then when I start writing, it's a marathon—a painful, torturous, 14 hours a day, nonstop, not eating, not sleeping, falling-apart kind of process. A few months later I have a book. While I'm writing, I try and eat the same meals every day. I keep my life's routines exact and similar so all I'm thinking about is the book. I get totally caught up and crazy and trancelike, and it's pretty awful.

BM: Certainly Sebastian Junger. He's a god, he's amazing, and I love his work. Michael Lewis knocked Wall Street out of the park so well that I'm in awe. Michael Crichton was my favorite author for many years—I wanted to be him when I was younger. Hemingway's The Sun Also Rises is my favorite book. I used to read it every month. Now I read it twice a year.

BM: I've got an idea, but it's still under wraps. Also the movie version of Sex on the Moon is getting going, and I can't wait to see how that goes. I think the story will be really awesome on the screen.

Wow, "Sex on the Moon". Something tells me they're running out of gimmicky titles.

That's totally powerful, when you write about something that stirs imagination and shows that there are no limits. Being a neurotic writer myself, I always try to make my characters look like real people who just have lost their passion and aim in life. Then, it was the first time when I had my 5 paragraph essay outline done without any help of my editor. I created the heroes that were actually rotten people.