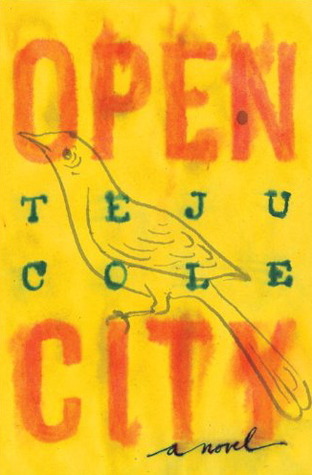 The eclectic chaos of city life has served as both muse and foil for many writers, artists, and dreamers, and photographer Teju Cole is no exception. His portfolio bursts with images captured in many of the world's great metropolises—Rome, Rio de Janeiro, Delhi, and his hometown, Lagos. Growing up in Nigeria, Cole published a novella with photographs, Every Day Is for the Thief, about a young Nigerian coming home after many years away. The writer now lives in Brooklyn and has turned to New York City as his source of inspiration for his introspective debut novel, Open City. A young Nigerian-German psychiatrist named Julius restlessly wanders Manhattan on foot, pondering lost love, post-9/11 America, even the bedbug infestation. Cole shares three photographs, "New York Red," "New York White," and New York Blue" that evoke the city's varied landscapes. 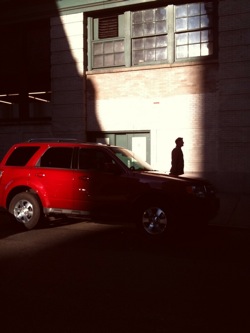 "New York Red" by Teju Cole
Goodreads: What is your favorite thing about New York City?

Teju Cole: The poet Tomas Tranströmer has a memorable line about New York being a place "where one glance can encompass eight million people's homes." That's a number so large as to be almost incomprehensible, and my favorite moments in New York are of being in a high-rise or on a plane approaching one of the city's airports early in the evening and seeing the soft and glimmering lights below: evidence of millions of lives and millions of stories playing out in real time. And I love all evocations of this, whether it be James Salter's stories or in Jay-Z's songs.

GR: Like your protagonist, do you enjoy contemplative walks, letting both your thoughts and feet wander?

TC: Yes, I love walking alone in the city. While writing Open City, I wandered around a great deal because I wanted the book to have the texture of lived experience. Once, I walked from Houston Street to Columbia University, a distance of only seven miles, but in the middle of the city, where each block has a different character, that feels like an epic trek. And such walks, when undertaken late at night with no particular plan in mind, as many of mine are, can take on the character of a hallucination: one strangely illuminated encounter following another, and another, and another for hours. 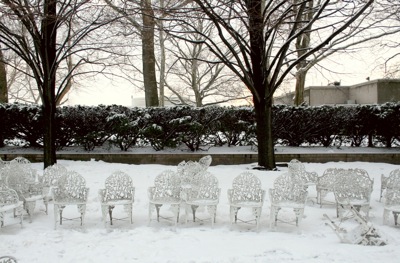 "New York White" by Teju Cole
One night I was out walking and I saw David Carradine, and we locked eyes. Then he sort of melted away into the night, and I went on my way. I thought about this when I heard, a couple of years later, that he'd died in strange circumstances.

GR: What led to your choice of making Julius a doctor?

TC: My aim in the book was to write about someone who is sensitive to hidden things. Professionally, as a psychiatrist, Julius is treating serious illnesses that seldom betray external physical symptoms. In his time away from work he is drawn again and again to those aspects of city life that are ignored or disregarded: immigrants, suppressed histories, ongoing persecutions of all kinds, and interrupted or incomplete mourning.

But the story turns, to a certain extent, on how this sensitivity masks Julius's refusal to address certain aspects of his own history. There's a sad irony to it. 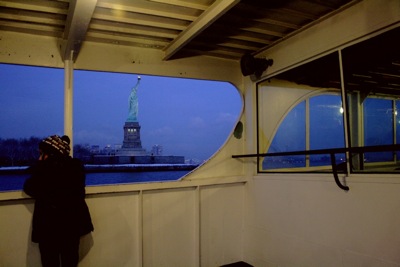 "New York Blue" by Teju Cole
GR: What are you working on now?

TC: In addition to my photography, I'm working on two very different projects. One is a dissertation on Pieter Bruegel's paintings, work that was made during the Dutch revolt against Spanish rule in the 1560s. The other is a nonfiction narrative about the city of Lagos, where I spent the first 17 years of my life.

Actually, I suppose there are three projects, as I'm also taking notes for another New York novel. But it takes a long time for the material of a novel to accrete, so it'll be a while before I'm ready to write that book.

Yes, I want to add this to my "to read list." The storyline sounds quite stimulating.

I love reading authors who are far more complex than one would imagine. Going on my list.

I was totally enchanted by this this book.

Just say this book while at work. Hoping for the best.

I was totally enchanted by this this book.

Just say this book while at work. Hoping for the best.

What is up with the comments under this interview? Are there Goodreads spambots running around? I'm confused.

Anyway, it's an awesome book.

A thoughtful, well-written novel that creates a rounded, fascinating narrator as he observes life in New York and beyond. All sorts of big subjects are touched upon with a light touch. I read it and thought about ending my career in the writing services and starting to write my own novel. 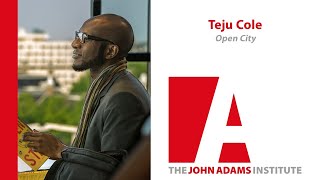