Author Elizabeth Strout has conjured up an unlikely heroine and penned a literary classic. Olive Kitteridge (enter now to win a copy!) may be a grumpy, retired 7th-grade math teacher best known for her caustic tone and overbearing tendencies, but in May she captured the attention of the Pulitzer Prize committee, putting Strout alongside timeless writers such as William Faulkner, Harper Lee, and Norman Mailer. Strout's unique novel, composed of 13 short stories strung together like beads on a necklace, takes place in small-town New England (also the home of her two previous novels, Amy and Isabelle and Abide with Me), and introduces a large constellation of characters, all orbiting the brusque but ultimately empathetic Olive. Strout shares with Goodreads the stack of books currently by her bed.

The Essential Tales of Chekhov by Anton Chekhov, edited by Richard Ford

"These stories are jewels. I allow myself only one a night because they are so perfect and full, and I don't want to lessen the effect. Full of direct and human truths, they are like a friend."

To the Mountaintop: Martin Luther King Jr.'s Mission to Save America: 1955-1968
by Stewart Burns

"Because I was recently in Memphis, and saw for the first time the hotel where King was assassinated, I became interested in a new way about his life and struggles and bought this book, which has been a wonderfully compulsive, informative read."

"An exquisite book about three soldiers in World War II. It is a short read with a long aftermath of many thoughts—beautifully told and deeply memorable."

"These stories are Munro at her best, although when is she not at her best? They are stories to get lost in, to think about their everyday and extraordinary characters making their way through life."

Chronicle of a Death Foretold by Gabriel García Márquez

"The tale of a murder of "honor" that spins around dizzily and gloriously—a masterpiece."

they did a wonderful job!!!

I agree. Richard Jenkins was outstanding in the HBO version. Wonderful book!

It makes sense that Elizabeth Strout reads Chekov since she is one of the best writers of her generation. 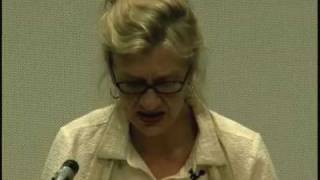