Posted by Goodreads on September 12, 2016
43 likes · 88 comments
Fans of James Dashner's beloved Maze Runner series are being promised answers they've spent years waiting for in his hotly anticipated prequel, The Fever Code. How, for example, did WICKED find Thomas? And how did Thomas build the maze? The thrilling dystopian science fiction series struck an instant chord when the first Maze Runner book came out in 2009, and fans have been hungry for more ever since. The Fever Code marks the fifth book in the series, which has been adapted into successful films, with a third due to resume shooting next year. Here Dashner answers your questions about his inspirations for WICKED, creating his characters, and the one thing about the movies he would have changed. 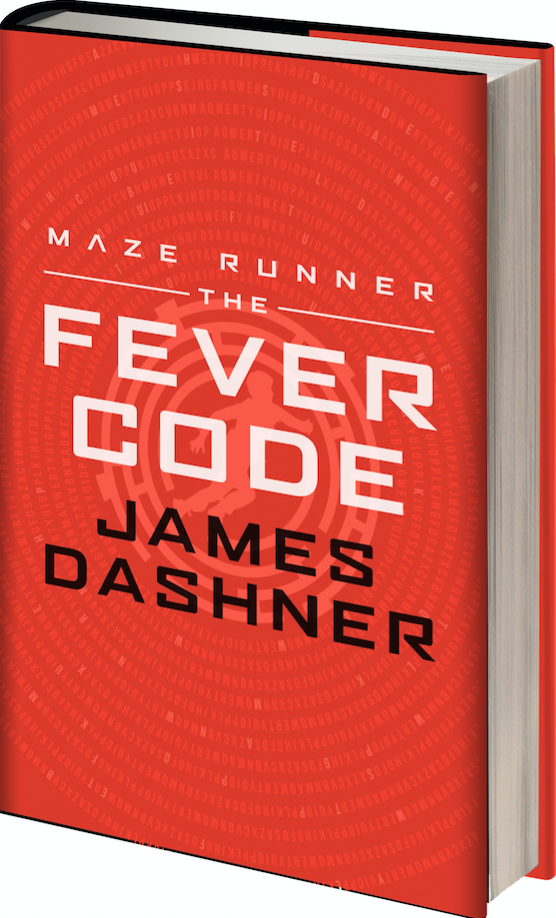 Error rating book. Refresh and try again.
Rate this book
Clear rating
1 of 5 stars2 of 5 stars3 of 5 stars4 of 5 stars5 of 5 stars
Christina: Much like the creators of Lost, you must get a lot of questions about things that were left unanswered in the Maze Runner series. Do you wish you had been able to go back and fill in those gaps, or was that a choice you made—to keep things more ambiguous?

James Dashner: This is an interesting question that's hard to answer because I honestly don't feel like there were that many things left blatantly unanswered. We know why they were there, who was behind it, what the purpose of it all was, where they end up, etc. But so much of it is told in little glimpses and snippets of memory that I can totally understand why some of it is missed. And I personally like that. I didn't want the last book to become a laundry list of answers, and the same even goes for The Fever Code. But after reading that prequel, I think people will feel very satisfied. At least I hope so!

Alison: When writing a popular book, are any of your plot decisions based on reader response or feedback from earlier books?

JD: I would say never on any kind of specific level, but perhaps on a general, big-picture level. I mean, I want to entertain my readers and make them happy. So if I can see something that really affects them, it naturally bleeds into my future work. But it's never a response to something like, "Hey, you better not kill this character or I'll murder your family!" Those kinds of decisions are usually made before anyone on the outside could influence them.

Sara: What inspired you to develop WICKED? Was it based on any real world events or organizations that exist?

JD: I really wanted an organization that didn't feel like the typical oppressive evil government. They're not a government at all, in fact, but instead a group of scientists and doctors trying to save mankind. One of the main themes of the entire series is slowly making the reader have empathy for WICKED and understand their desperation. It's why I gave them such an ironically blatant name.

Nancy: Is The Fever Code going to be different from your other books?

JD: It will still be told mostly from Thomas's perspective, but I do think it will feel different. For one thing, it takes place over a much longer period of time, basically jumping us through Thomas's life leading up to the moment he enters the Maze. I think my readers will really enjoy it. Even though it's a prequel and you basically know how it ends, the journey to get there comes with a lot of surprises.

Brittany: What do you think is the most important thing the movie adaptations of your books got right that you were glad to see? And what was the most significant thing about the movies you would have changed if you could?

JD: I'm so in love with the movies, probably more than any other human on Earth. I especially like the tone and feel of the world Wes Ball built as well as the characters. Even though there are a lot of little changes, it feels like I'm watching what I wrote. If I could change one thing, I would've made the Cranks a little more human instead of monster. That's what makes them so creepy in the books, I think. But overall, I'm very happy with the films!

JD: First of all, thank you! That's something I've really tried hard to improve upon. It's really difficult to say exactly how I do it because I rely so much on my instincts. For example, I'll say to myself, OK, this guy is a smart aleck to cover up his lack of self-esteem. Then I'll let my mind take off, filling in the blanks of his personality and creating backstory and things like that. But there's no golden nugget of advice on that one, I'm afraid.

JD: When I'm in first draft mode, I try to do a "session" in the morning and then another in the afternoon. A session can be anything from 2 words to 2,000 words, depending on the creative flow and how I feel. With edits, I start thinking in terms of time. For example, I'll try to edit for one or two hours in the morning and then again in the afternoon. Sounds easy, maybe, but my brain can't handle much more than that at once.

Kim: What was the defining moment when you knew that you were going to not only write a book but write a YA novel? After working in one of the top Chicago suburban high school libraries, I know that writing for this age group can be very challenging. It better be very, very good, or they will put it down.

JD: I'd always wanted to be a writer, and early in college I got this crazy notion that I might write gigantic 1,000-page fantasy novels. It didn't take long for me to realize I was terrible at that. Then it hit me that the most magical time for reading for me was when I was a teenager, and writing for that age helped me return to that magical feeling. I've been devoted to it ever since. I'm not sure I would write much differently if I was aiming for adults, however.

JD: The ideas and world of The Maze Runner (book 1) were definitely the first things that came to me, including some of the characters. But before I finished that book I realized that the story needed to be much bigger or their suffering and trials inside the Maze wouldn't mean a whole lot. So I started brainstorming and came up with more and more backstory and world building. That's how the other books were born.

Elena: Who is your favorite author? And why do you write?

JD: Definitely Stephen King. He was my "YA" section in high school, and I've followed his every book since. I write because it's fun, helps me look at and evaluate the world and my life through a different lens, and because I love to entertain people and tell stories. And it beats the hell out of being an accountant.

LOVE this series!! Snatched the Maze Runner off the new book shipment while working as a Librarian Assistant at a JH library and made every kid read it that year that would listen to me! And guess what? MY favorite author is Stephen King since reading Carrie my Junior year of HS before I got my degree in--wait for it--accounting ;-)

Best series ever I am glad I found it your the best James Dashner. :)

OMG I LOVE, The Maze Runner series!! I'm a student in Middle School and I got hooked on the series last year!! I actually hadn't ever heard of it... But I saw it on the shelves of Barnes and Noble and I thought, "Well, why not"!!! The after the first book I couldn't wait till I got the second book, etc. After reading the series I was inspired to be a writer!! Now in my 8th grade year I've excelled immensely in Language arts!! Thanks James Dashner!!

I love the Maze Runner series. Seriously. I started reading it when I was in the 8th grade, and I found it immensely hooking. From the character development to the ingenious writing style, I craved it. I loved most of the characters-especially a certain blonde with a limp-and I cannot wait to get my hands on fever code!!

I really love the maze runner series i got into it after i saw the movie (i did not even know it was a book before i saw the movie) i am so excited for The Fever Code!!

I love The Maze Runner series and I'm really excited to buy a copy and read The Fever Code!

Thanks to the place for providing me the robux generator

Hacking Roblox is little bit difficult but I found some legal ways to roblox hacks or you can say robux tricks now you can use these steps and generate free robux without much difficulty.

How to Generate Robux For Free or how to hack roblox is now easier than before you can use robux generator to generate robux for free.