Posted by Cynthia on May 1, 2017
9 likes · 3 comments
Share
Share on Twitter
What makes a good mystery novel? A crime is committed—not necessarily on a dark and stormy night—and readers want to know: Who committed the crime, and why?

Some writers may shy away from writing mystery novels because, quite frankly, it’s hard! Story lines are often complex, readers need to be kept guessing, and characters need to have an interesting backstory.

But you read the advice from the experts: Start writing. Approach questions from Ask the Author (find it on your Author Dashboard) as if they were writing prompts. Try it out answering the question "What mystery in your own life would make a good book?" during Mystery & Thriller Week on Goodreads.

If you're all out of questions, here are five writing prompts to get you going: 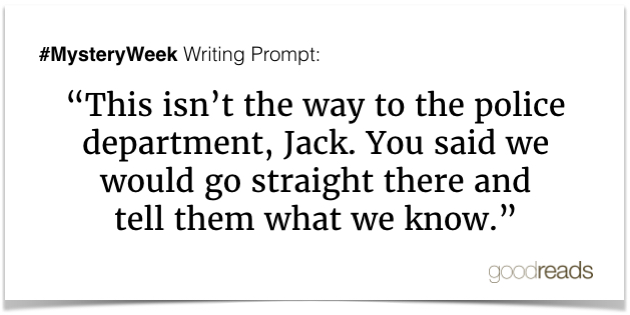 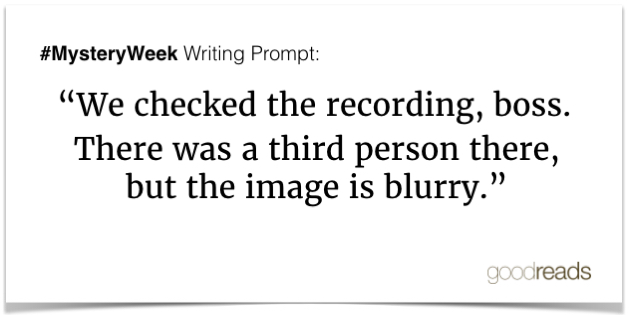 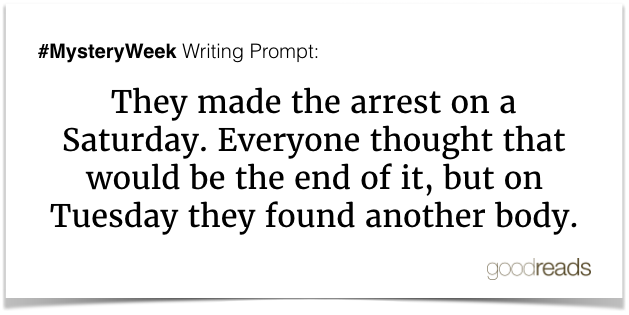 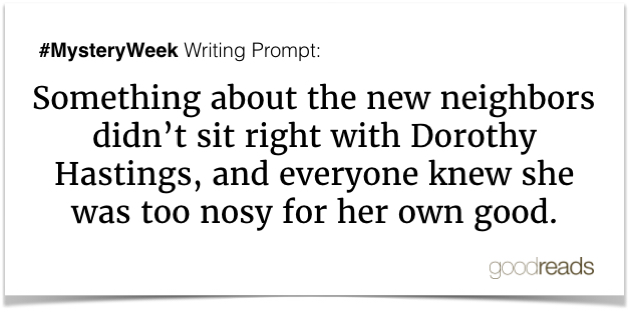 "What does my boss want from me?" I thought when I walked through the halls, passing every cubicle office.

My boss, Mr. Steiner, told me to come to his office immediately when I’m done talking to the customer on the phone. When he first said that, my heart was pacing so fast that I was dizzy. I wasn’t able to concentrate on my call with the customer. Though, I managed to do a good job and hung up the phone before leaving the office.

As I entered the room, everything was empty. Even the paperwork and folders were gone. Was Mr. Steiner missing? He did tell me to meet him in his office before I finish dealing with a customer. I kept telling myself that he must’ve stopped by someone and had to run for a few minutes. It would be no problem.

So to keep me distracted, I looked through his office window. The view was fantastic yet petrifying. I might have been fifty feet from my workplace to that concrete sidewalk. At least I was safe inside Mr. Steiner’s corner office. I dreamed of having my own office like Mr. Steiner’s. Fern trees backed against each corner, a painting of a park bench, street lights, trees in different colors that is hanging by the white, bright wall, dark brown, wooden desk, and a black swivel chair. Of course, I had my own desk and swivel chair, but I had cubicle office like everyone else. It was not as big as Mr. Steiner’s, so it was hard for me to get around when I’m cramped with many paperwork and folders.

If only I had my own office, I wouldn't have to deal with less space or the cold air that gave my bare ankles goosebumps. After all, I was wearing a black suit, white dress shirt, black skirt that is down to my knees, and black heels.

I’ve waited for Mr. Steiner for forty-five minutes, yet he was still not here. Where could he have gone? So without any hesitation, I scanned around his office to find any clues.

Then, I noticed something red on the calendar. "My first clue," I guessed and approached it.

As I got closer, the red ink is circled on today’s date. There was no little note on it. Is this how Mr. Steiner remembered important meetings and social gatherings?

I moved on to my boss’ desk and searched through his belongings. God forbid me, if Mr. Steiner walked through his door and saw me going through his stuff, he would kill me. The door creaked open but, when I looked up, I saw that it was my co-worker/friend, Kate. She stepped back quickly before I could see what she was holding. “Kate, don’t scare me,” I gasped.

“I’m sorry, Erin. I didn’t mean to do that.” My co-worker looked around the office before she asked, “Is Mr. Steiner still not back?”

“Uh.” Kate was hesitant while looking nervous. I arched my eyebrow, curious by my friend’s behavior. “Nope, not a clue,” she only answered.

I wasn’t buying it because of Kate’s big, nervous grin on her face. I knew that Kate was hiding something and, whenever she hides a secret, she gets nervous. She must’ve known where Mr. Steiner was, and she was holding my next clue that I needed to unveil.

I was going to walk over to where Kate was standing until she closed the door behind her, hearing the sound of Kate’s heavy breathing and footsteps. I cursed under my breath and started run after her.

Everyone was giving me odd glances at me and my friend, but I tried to ignore. I knew that my high heels were not meant for chasing down my friend, but what other choice did I have? At least I was catching up to her.

And I managed to catch her before I caught sight of balloons, flowers, and a banner that says “Happy Promotion and Retirement.”

“Surprise,” everyone yelled in excitement.

I took in what’s around me; my jaw dropped and remained agape, as I couldn’t express what I felt until a few moments later. “What is going on?!”

“And mine,” Mr. Steiner’s voice had cut through, as he walked in front of the crowd.

“I don’t understand, sir. Why is it our party?”

“Because I’m retiring, and I found the perfect person to run this company.” Mr. Steiner walked a few paces toward me and patted me on the shoulder. “I believe can do it, Erin, since you have worked with me for ten years. And now that my time is up, it’s time to pass on the baton to you.”

Mr. Steiner’s words have melted my heart that I could not utter a word. I didn’t expect to get a big promotion from him. It would be an honor that I would run this company as he did. I thought I was going to be fired from him, even though I had been working with Mr. Steiner for so long. But I shouldn’t have thought that before I came to his office.

This was the best surprise that I’d ever had, and it was a good thing that I unveiled a double mystery.

He stood there with the bloody knife in his hand and said, "I have one question for you."