Posted by Katie Boyer on February 27, 2017
12 likes · 1 comment
Share
Share on Twitter
Movie studios are increasingly turning to Goodreads to build excitement and awareness for their films. This is especially true for book-to-film adaptations where movie marketers can tap into a ready-made, highly-social audience at scale with the existing fans of an author and book.

One example of Goodreads helping a movie find its fans is Love & Friendship, a Lionsgate film, which came to theaters in May 2016. Thanks to Goodreads being a top performer compared to other outlets for the Theatrical Release campaign, Lionsgate ended up booking two additional campaigns with Goodreads to drive more sales.

While Love & Friendship is based on the relatively unknown Jane Austen novella, Lady Susan, the fan base for Jane Austen—who has more than 4.3 million ratings on Goodreads—is significant. In the initial Theatrical Release campaign, Goodreads therefore worked with Lionsgate to leverage this interest and achieve their two campaign goals:

1. Reach a core target audience of females 35+ to build awareness of the film.
2. Drive traffic to the film's website and ticket sales.


Goodreads built a campaign comprised of targeted, high-impact placements across our site, which allowed Lionsgate to reach the right target audience at scale. Some of the high-performance placements included: 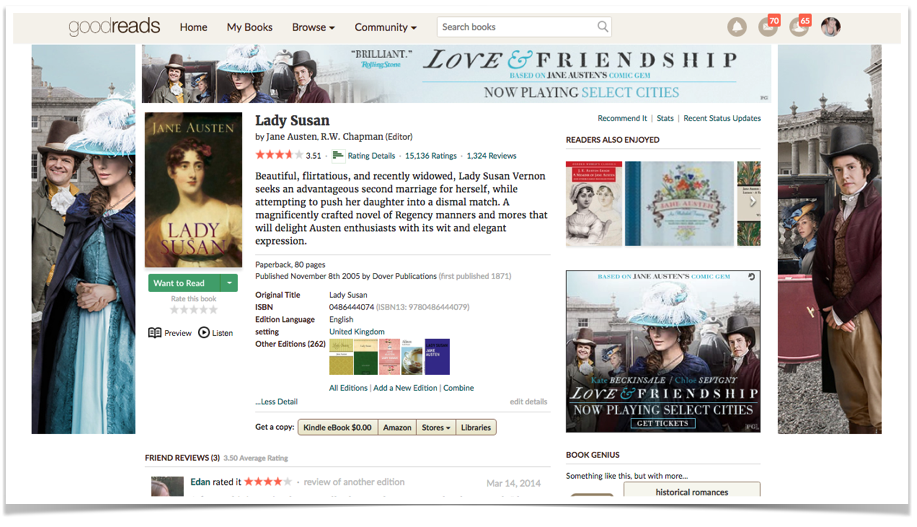 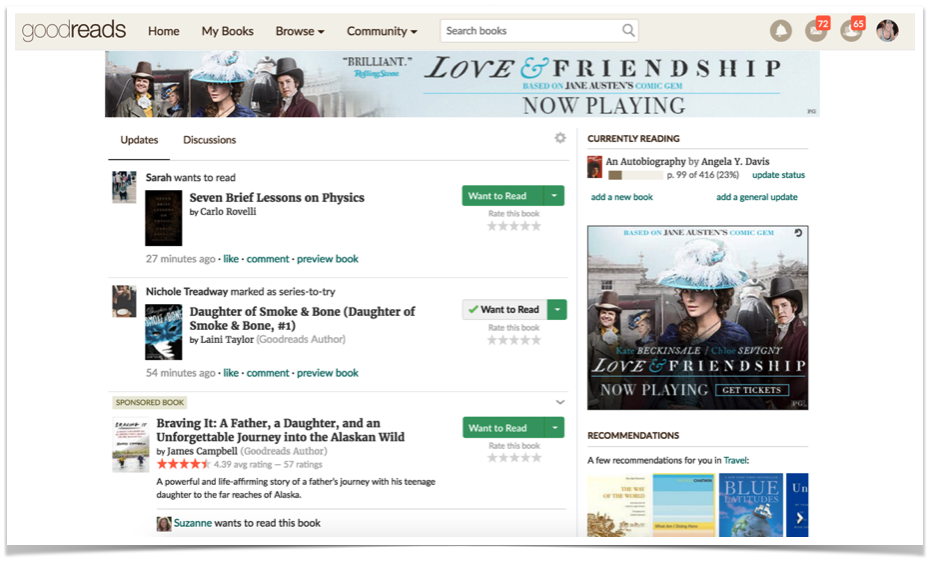 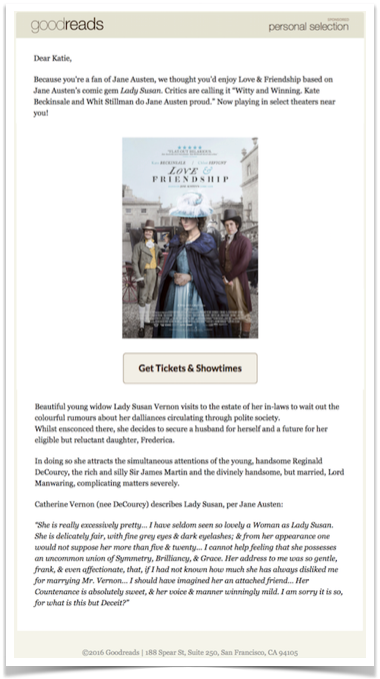 The overall campaign Click Through Rate (CTR) performance for the Theatrical Release Campaign was very strong, thanks to the quality of the creative and the popularity of the genre/author. Due to these results, Lionsgate determined Goodreads was a top-performing site compared to other outlets and they therefore dedicated additional budget for a Theatrical Boost campaign.

The team identified the top-performing placements from the Theatrical campaign and focused on even more granular targeting based on age and gender. As result, the boost campaign had strong performance which was inline with the original theatrical campaign.


Based on the success of the first two campaigns, Lionsgate tapped Goodreads to promote the Home Entertainment release. The campaign's objective focused on positioning Love & Friendship as a must-own title for fans of Jane Austen books and films, as well as fans of similar genre book titles. 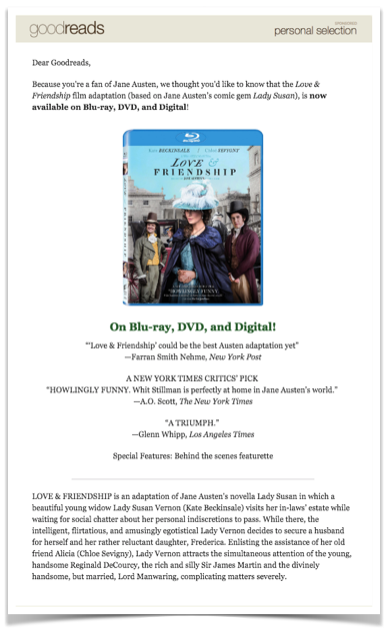 Goodreads recommended focusing the budget on a product that directly drives sales – our custom Personal Selection Email. This product allows a client to target fans of the author and drive directly to a (retail) purchase page.


“This was definitely a great way to let Jane Austen fans know about the movie and let them immediately purchase it. I'd love to utilize this product in the future, specifically with titles that already have a strong fan base; it's proven to be an effective way to really reach and engage super-fans within the Goodreads community.”

Thanks to the spot-on targeting, the email realized open and engagements rates that exceeded client expectations and was integral in achieving Lionsgate's goal of driving purchase intent among Jane Austen fans.


Overall, the three campaigns exceeded the client's expectations and met campaign objectives. Some of the factors that contributed to the campaigns' success include:


Love & Friendship is a great example of how Goodreads can support the full lifespan of a film, from Theatrical pre-release, premiere weekend, ongoing support and on through the Home Entertainment release.

If you're interested in promoting entertainment campaigns on Goodreads please reach out to your Account Manager or email us at advertising@goodreads.com


Next: Six Ways Authors Can Participate in Romance Week 2017

The Recusants - Amazon Kindle Store. Give it a read and let me know you thought, would love to hear them.